Whether they are Orthodox, Conservative, Reconstructionist or Reform, whether they gather on a California beach or in a New York City synagogue, Jews share at least one common element at their Rosh Hashanah observances: the shofar. 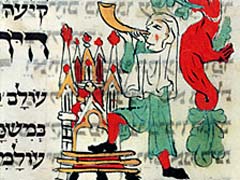 “It’s such a powerful Jewish symbol,” said Rabbi Aaron Panken, vice president of Hebrew Union College-Jewish Institute of Religion. “It is the specific symbol of repentance.”

The sound of the shofar connects these important days in the Jewish year. Elul, the month preceding Rosh Hashanah, is a time of preparation, and the shofar is blown every day. Its reverberations are at the heart of Rosh Hashanah services, and it is also blown at the end of services on Yom Kippur.

“The main way it’s used is to remind us that this is an alarm, a wake up call,” Panken said. “It reminds us to think about the way we behave and the kinds of things that we do, and to move us to act better.”

The shofar’s symbolism is rooted in its history, which begins in the Torah. “When the Ten Commandments were given at Mt. Sinai, the voice of the shofar was heard,” said Sylvia Herskowitz, director of Yeshiva University Museum.

The shofar is invoked at critical moments in the Bible and serves many purposes.

“It’s used for everything — from processionals of kings, as a call to war, to induce fear,” Panken said. “If you think about it, it’s sort of the air raid siren of its day, the way that people would communicate alarm or concern.”

The biblical commandment is that everyone should hear the shofar on Rosh Hashanah, Herskowitz said. It is so important that if someone is hospitalized or too ill to come to the synagogue, a shofar blower will visit and sound the shofar for them.

There are thousands of years of Jewish commentary on the shofar — on how it should sound and how it should be made. It is fashioned from an animal’s horn, most often a ram’s horn. The Talmud says it may also be made from the horn of a sheep, a goat, a mountain goat, antelope, or gazelle, Panken said.

“The horn of a cow is not acceptable,” according to Herskowitz. “Tradition says at the time of asking God for forgiveness, we don’t want to remind him of the sin of the Golden Calf,” referring to an idol worshipped by the Israelites during the Exodus from Egypt.

The shofar must be whole. It should not be made from two animals’ horns that have been glued together, and it can’t have any breaks or holes in it.

Olivestone learned to blow the shofar when he was a child. It can be difficult because there is no reed or valve, nothing to help make the sound. There is always an element of uncertainty about how the sound will come out, said Olivestone.

That uncertainty is not limited to the person who blows the shofar. The synagogue congregation also has a sense of anticipation about the sound the horn will make.

“I say it’s probably the most dramatic part of the Rosh Hashanah service, when the shofar blower comes up there,” Herskowitz said.

Before the shofar is blown during the Rosh Hashanah service, there is a blessing giving thanks for the commandment to hear it. Then, in many synagogues there are 100 blasts of the shofar and three distinct, mandatory sounds.

“You’re not allowed to interrupt anything, in Jewish law, between saying the blessing and doing the action,” Olivestone said. “So you cannot talk until the last note is sounded. Theoretically at least, the synagogue is very quiet. It’s all one long mitzvah,” he observed, using the Hebrew word for commandment or good deed.

The first mandatory sound for the shofar blower is the Tekiah.

“The Tekiah comes from the verb which means to blow the shofar,” he said. “The sound is in itself a sound of alarm. It’s a straight, simple note. The rule is that the Tekiah, which brackets other sounds, has to be at least as long as they are.”

The next mandatory note is the Shvarim.

“The word comes from the Hebrew word for something being broken. It’s a three-part sound. It sounds like somebody crying. Then the cry proceeds to a more intense stage. The next stage of somebody crying might be when they’re actually sobbing, and that’s the sound of Truah. It’s at least nine staccato sounds, rapid fire,” Olivestone said.

The last sound is the Tekiah Gedolah, which is really an extra long Tekiah, used to denote the end of the series, he said.

“There are loud blasts that come out of it, and there are these subtle, quiet sounds,” Panken said. “What’s interesting to me is that could mirror in a sense what repentance is like. There are these great moments when you have an incredible understanding that really strikes you and changes your life. Then those subtle, sort of small, yet still important moments.”

For all that has been written about its power and meaning, there is something about the sound of the shofar that is difficult to describe.

“When you think about it, it’s just an animal sound,” Olivestone said. “It’s just as basic as you can possibly get. One of the traditions in connection with the shofar is that there are prayers which can never be verbalized. There are prayers that are deeper than language. The shofar can somehow express the prayers that words are inadequate to express.”

Ansley Roan is a freelance religion reporter in New York.