BOB ABERNETHY, anchor: Now the Episcopal Church divisions over homosexuality and the interpretation of Scripture. This week the U.S. Episcopal bishops went as far as they said they could to comply with the demand from the worldwide Anglican Communion that the U.S. church clarify its policies on gay issues. The bishops said they would “exercise restraint” on consecrating gay bishops and would not officially authorize same-sex blessings. Conservatives around the world say the bishops did not do enough. So the question remains: can the church avoid schism? Kim Lawton reports. 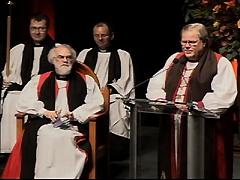 KIM LAWTON: The Episcopal bishops gathered in New Orleans amid intense pressure from inside their own church and from their fellow members of the worldwide Anglican Communion. Top Anglican leaders had given the U.S. church until September 30 to state clearly that they will not consecrate any more gay bishops or authorize any sex-same blessings. Failure to do that, the leaders said, would have unspecified consequences for the Episcopal Church’s place in the Communion. Episcopal leaders said they answered those concerns, even if their document did not go as far as many Communion leaders had sought.

LAWTON: But many conservatives say the response was inadequate. Pittsburgh Bishop Robert Duncan didn’t stay at the New Orleans meeting for the final vote.

Bishop ROBERT DUNCAN (Diocese of Pittsburgh): It’s not enough for the dioceses like my own that really don’t see a way to go forward within the Episcopal Church.

LAWTON: One of the strongest international critics, Nigerian Archbishop Peter Akinola, said the U.S. bishops fell far short of what he was looking for. Akinola spoke at a conservative church gathering near Chicago this week. He was greeted by protesters who accused him of being anti-gay.

Anglican leaders from Africa, Asia and South America, the so-called Global South, have been building alliances with American conservatives who share their theological perspective. Overseas churches have consecrated several Americans as bishops who will work in the U.S.

Bishop JOHN GUERNSEY (Anglican Church of Uganda): I receive the authority given to me to oversee and care for the clergy and congregations of the Church of Uganda in the United States of America. 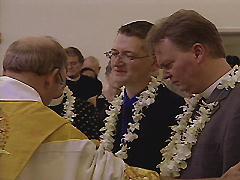 LAWTON: In New Orleans, the Episcopal bishops urged an immediate end to what they called these “foreign incursions.”

The bishops acknowledged their document doesn’t set any new policy. It’s not an outright ban on future gay bishops, but rather a promise to exercise restraint in consecrating any bishop whose “manner of life presents a challenge to the wider church.” Likewise, while the bishops promised as a body not to authorize public rites for blessing same sex unions, there is leeway for individual bishops to allow blessings in their dioceses.

Bishop KATHARINE JEFFERTS SCHORI (Presiding Bishop, U.S. Episcopal Church, at news conference): Not everyone was 100 percent happy with every word in this document, as you might imagine. But together we believe that we have found a place that all of us can stand together.

LAWTON: Many bishops argued that the international leaders do not have the authority to determine positions for the U.S. church, which is self-governing.

Bishop PETER LEE (Diocese of Virginia): The Anglican Communion is not a juridical group where there is a clear method of kicking someone out, to put it bluntly. So if we are — if our relationship is stressed with the rest of the Communion to the breaking point, the break will come from others, not from us.

Bishop GENE ROBINSON (Diocese of New Hampshire): The prediction was that this would be like Katrina II, you know, some horrible storm that would tear the Episcopal Church apart, and what actually happened was that the vast majority of the bishops of all persuasions came together for this common statement. And it’s really, really a miracle. 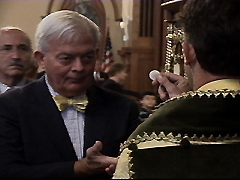 It’s unclear whether the bishops’ statement will be enough to satisfy other members of the Anglican Communion. The Communion’s spiritual leader, Archbishop of Canterbury Rowan Williams, was traveling and did not have an immediate comment. He had been in New Orleans for nearly two days of closed-door meeting with the bishops, but left before they issued their statement.

LAWTON: Robinson acknowledged he had some frank exchanges with the archbishop.

Bishop ROBINSON: I understood him to be saying that we had to choose between fidelity to our gay and lesbian members and fidelity to the process of what he called “common discernment.” And I said that, as a gay man, choosing a process over human beings felt dehumanizing to me. And perhaps there were people who were shocked that I said that, but after all, I’m the only openly gay voice in that room.

LAWTON: The New Orleans meeting seemed to solidify the decisions of those already contemplating leaving the Episcopal Church. New Mexico Bishop Jeffrey Steenson announced he was resigning in order to become a Roman Catholic.

Bishop JEFFREY STEENSON (Diocese of the Rio Grande): There are a lot of doctrinal matters that are being debated in the Episcopal Church that just astonish me, and I felt that it was really important for me now to be clear with myself about where I could be comfortable.

LAWTON: Four of the 110 U.S. dioceses have begun steps to break with the Episcopal Church. Conservative American bishops, including some who left the Episcopal Church decades ago, met together in Pittsburgh this week to discuss ways they can work together. Many are aligning with Global South Anglican churches. 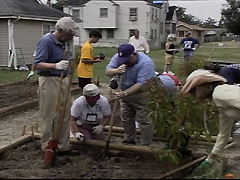 Bishop DUNCAN: From the beginning, the message to me and to other leaders from the archbishops around the world has been get it together, find a way to work together, agree on a leader, agree on the way you’re going to work together and declare it. Move forward and we’ll go forward with you.

LAWTON: Meanwhile, Episcopal Church leaders spent a day of their meeting doing service projects around the Gulf Coast. They said they wanted to put the controversies aside and focus more on ministry and mission. And on this point, the conservatives agreed.

LAWTON: Well, in fact no new policy was set at this meeting. The U.S. Episcopal bishops restated the situation that’s been in play in their church for the last couple of years. They may have said it a little more clearly, which is what I think a lot of people in the Anglican Communion were looking for, but they have not set any new policy. For the conservatives I think, though, this was a line in the sand. This was a moment they were looking for, and it seems like it’s a point of no return for them, and so it seems to have solidified a lot of the decisions that many people were considering anyway.

ABERNETHY: So what are the possibilities now?

LAWTON: Well, the conservatives that met here in Pittsburgh this week are trying to put together what they’re calling a federation of all of these groups that have left the Episcopal Church over the years. And they’re trying to see if they can put aside all their many differences and have a united alternative Anglican body here in the United States that might in some ways rival the U.S. Episcopal Church, that they can present to the worldwide Anglican Communion as here’s a viable form of Anglicanism in the United States. They have a plan of planting up to1000 churches over the next year, and they really want to move forward with that plan, and they’re getting support from many of these conservative archbishops in the Global South.