BOB ABERNETHY, anchor: In Myanmar in Southeast Asia, tens of thousands of Buddhist monks have been marching against the military government and where the regime cracked down, violently. Scott Flipse is a senior policy analyst at the U.S. Commission on International Religious Freedom, where he specializes in U.S. policy toward Asia. Welcome.

ABERNETHY: Tell us about the power of Buddhist monks in Myanmar and what they accomplished with their march.

Dr. FLIPSE: Buddhist monks are powerful in Burma because of their moral authority. There's possibly up to half a million Buddhist monks and novices, and I think going out into the streets signifies to the people of Burma that the monks no longer believe the government has Buddhist bona fides. 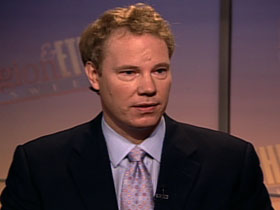 Dr. FLIPSE: Such as minimizing sorrow, maximizing happiness, supporting the poor, and promoting Buddhist values such as generosity and compassion.

ABERNETHY: Does that mean that the Buddhist monks' demonstration was for those values more than it was for democracy?

Dr. FLIPSE: Well, I mean if you looked at the signs that they were demonstrating [with] it said, "Love and Kindness" and not about democracy. But democracy is the form which I think most of the younger monks believe will bring about Buddhist values and reconciliation.

ABERNETHY: We saw some photographs of Buddhist monks holding their rice bowls upside down. What's the significance there?

Dr. FLIPSE: It's called turning over the rice bowl, which is a Buddhist form of excommunication. They are playing spiritual hardball saying that the military cannot be Buddhist, cannot give alms, cannot practice generosity.

ABERNETHY: And the reason that has power is because that is a good deed that then will serve them well in the next life? Is that the idea? 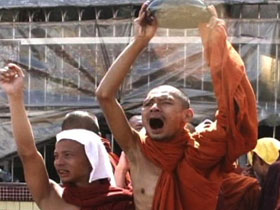 Dr. FLIPSE: Yeah, there's a merit aspect to alms-giving as well. So I guess they're telling the military that they don't believe that they are good Buddhists.

ABERNETHY: So came the crackdown and a lot of casualties and arrests. Does that mean that the Buddhist monks have failed?

Dr. FLIPSE: No, I don't think so. It's yet to be seen. The government had to decide whether or not it was going to shoot Buddha in the streets. I think it did; it made that choice. And I think it signifies to the Burmese people, again, that this military government has no political legitimacy. It has -- it does not represent Buddhist values.

ABERNETHY: And so, very quickly, does that suggest a backlash against the government?

Dr. FLIPSE: I think it's a start of a revolution of the spirit, which may have political implications later on.

ABERNETHY: Scott Flipse of the U.S. Commission on International Religious Freedom, many thanks.

In Myanmar in Southeast Asia, tens of thousands of Buddhist monks have been marching against the military government and where the regime has harshly cracked down.