Read more of Kim Lawton’s interview in New Orleans with Bishop Gene Robinson of the Episcopal Diocese of New Hampshire:

Q: How would you describe the statement of the bishops who met in New Orleans? 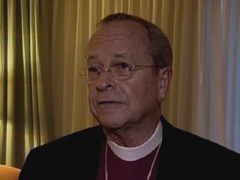 A: I think it’s a miracle when you look at what a broad piece of common ground we are standing on with this document. Then you look at the bishops who are in the room, all but one of whom, a very liberal bishop, voted for it. And it was the full range of liberal to conservative, all kinds of different faith and practice. That we could craft such a broad piece of ground to stand on, I think it’s a really wonderful thing. I think the prediction was that this would be like Katrina II. You know, some horrible storm that would tear the Episcopal Church apart. And what actually happened was that the vast majority of the bishops of all persuasions came together for this common statement. It’s really, really a miracle.

Q: Where does it leave gay and lesbian members of the church?

A: I think it leaves us pretty much where we were. That is to say we’re somewhere between being totally excluded, this was the case in the past, and we’re not quite towards full inclusion yet. The Episcopal Church has made enormous progress here, and yet we are a part of a broader Anglican Communion. And although we would like it all to have happened yesterday, that’s not the way the church works. I would say it’s not the way any group works. We are undergoing vast change at a pretty good pace. Would I have liked to have gone further faster? Absolutely, but there are also people who would have liked it to go much slower, and that’s what being a church is about. It’s about finding that middle ground, something that we can all live with for this moment. Then we see where the future takes us.

Q: Where does it leave the diocese of Chicago if Tracey Lind, an openly lesbian priest, is elected bishop?

A: We have a resolution of the General Convention that says we should exercise restraint, and we don’t really know where that will take us, and we won’t know until there is another bishop-elect who is gay or lesbian, and then we’ll see how that happens. I think we’re all exercising restraint in a sense that we know this is an important issue. We know it’s a controversial issue, and only time will tell how that will go either with bishops or with standing committees. And remember in our church it’s not just bishops who decide, but clergy and laity as well as the bishop.

Q: What did you learn at this meeting about the feelings of the rest of the world?

A: I think the international visitors underscored for me what we’ve known, but hearing it coming from their lips is even more powerful. Their contexts are so different from ours. It should not surprise us, but perhaps we’re naive when we forget that in many countries of the world if you’re known to be gay you can be imprisoned. There’s just rampant discrimination. In a context like that, to ever have a chance to sit in the room with a faithful, committed Christian person who also happens to be gay or lesbian — it’s just not something that happens. So to hear from their lips how their contexts are different from ours, I think it always helps to have that personal contact. It was just as important for them to experience how very different our context is. So I think there was learning on both sides. That’s really why we treasure the Anglican Communion so much is that if we hold together there is so much to be learned from one another.

Q: We understand there were some pretty frank exchanges. What did you say to the Archbishop of Canterbury?

A: I was frank with the Archbishop of Canterbury, at his invitation. I began my remarks to him by saying, “Your grace, you know that I respect you and your office. I always have. I always will. But some of what you had to say to us was disturbing.” And I understood him to be saying that we had to choose between fidelity to our gay and lesbian members and fidelity to the process of what he called “common discernment.” I said that as a gay man choosing a process over human beings felt dehumanizing to me. Perhaps there were people who were shocked that I said that, but after all I am the only openly gay voice in that room. I did feel that way. I know that other gay and lesbian people, had they been in the room, felt that way. I owed it to him out of my respect for him and his office to say to him what he came to hear, which was our responses to him. So he invited us to respond. I was not the only one who responded, nor was I the only one who responded in a frank manner.

Q: What about your attendance next year at the Lambeth Conference?

A: Actually, the thing I most hoped for happened during this week related to my participation in Lambeth, which is that it would be taken out of being a solitary decision between the Archbishop of Canterbury and me of New Hampshire. It would actually be owned by the House of Bishops. Part of the response that we made was to say that this whole house hopes for the full participation of the bishop of New Hampshire. I’m very pleased by that. There was hardly any debate over that at all, that the people of the House see my inclusion in Lambeth. That’s a really important thing for the American church.

Q: Several of the most conservative bishops weren’t here for that part of the meeting.

A: It’s important to remember that the bishops who left right after the archbishop left have not attended our meetings in years, have not lodged with us, eaten with us, or worshiped with us. So this was nothing new. The only thing new was that they actually showed up. They had announced very early on that they were not staying. That grieves me, but I cannot make someone stay at the table. I think the important thing here is that the vast majority, liberal to conservative, all stayed. We hung in there with each other. We spoke our minds. We disagreed about things. Then we found a place that we could stand together. That’s amazing.

Q: What message do you hope this sends to the wider world?

A: What I hope it says to the American church and the Anglican Communion is that we dearly love each other and we dearly love this church. Although there are many things we disagree about we intend to hang together. We treasure our partners in the Anglican Communion. We hope they treasure us. If we just keep holding on to one another while we fight some of these things out, it’s going to be okay. So the result I’m hoping for is a kind of lowering of the anxiety and discomfort, just to say it’s in Christ that we find out unity, not in our agreement. If we just hang in there with one another long enough, the spirit of God will hold us together.

I think the message for gay and lesbian Episcopalians is that the Episcopal Church is not going back; that our movement towards greater and greater inclusion of gay and lesbian people in the life and leadership of our church is continuing forward. It may not be going as fast as we would like, but its there. It is heartfelt. Even, it’s interesting, even some of the conservatives today in our closed session said we know where this is going. We know how this is going to turn out. Even they see it. I think they are just arguing pastorally that it needs to be at a pace that their people can absorb. So I don’t think there’s been any change in where we’re going. We’re only talking about how long it takes us to get there.

Q: And finally your thoughts on the involvement of foreign bishops in some U.S. dioceses?

One of the great surprises, to me, of this meeting was to hear of the sheer number of dioceses that have had incursions by bishops from foreign jurisdictions — archbishops, bishops, clergy coming from other international churches really with the purpose of undermining the Episcopal Church. I knew it was happening. I read about it like everyone else does. I am blessed not to have that happening in my diocese. But I was stunned at the number of dioceses in which this is happening. I don’t think the members of the Anglican Communion realize what an assault on our church this is. No one seems to be remembering that the Windsor Report, which everyone thinks called only us to task, actually called for that kind of incursion to end. There are no efforts that I know of in the Anglican Communion to stop those incursions from happening. That, too, is a part of the Windsor Report. The Americans would be happy to see some support from the Anglican Communion for stopping those incursions.