BOB ABERNETHY, anchor: The 280 U.S. Catholic bishops meet this coming week (November 12-15) in Baltimore, with a sharp debate likely over religion and politics, specifically on how much weight the issue of abortion should have in Catholic decisions on how to vote. Joining us to explore the arguments is Father Tom Reese, senior fellow at Georgetown University’s Woodstock Theological Center and a longtime authority on the U.S. bishops. Tom, welcome.

ABERNETHY: The bishops don’t tell Catholics how to vote, do they?

Fr. REESE: No. What the bishops want to do is provide ethical guidelines — guidance — to help people make the decision themselves on how to vote.

ABERNETHY: And this draft that they’ll be debating this coming week, this long draft says about abortion that it is “intrinsically evil.” But it also says, or at least implies, that there are some circumstances under which a Catholic might in good conscience vote for somebody who’s pro-choice. Those seem to me difficult to put together. 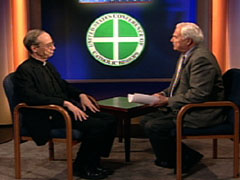 Fr. REESE: Well, each voter has to weigh the various issues involved, and the bishops are saying abortion is extremely important. But it may be that if you make the judgment that abortion is never going to be illegal, then you may want to look for a candidate who is going to help reduce the number of abortions by voting for social programs — healthcare, education, training — that will help women have the ability to choose life rather than abortion.

ABERNETHY: Some bishops have said that they will not give Communion to a Catholic candidate who is pro-choice. To what extent is that representative of the bishops as a whole?

Fr. REESE: Well, during the last presidential election only about 12 bishops said they would not give Communion to Senator Kerry. I always thought the headline should have been, “180 Bishops Say Nothing about Communion and Kerry.” We’ll just have to see in this election. Especially if Giuliani is nominated, we’ll have a pro-choice Republican Catholic as president, and we’ll see whether — how many bishops say he should not receive Communion.

ABERNETHY: The bishops have an enormous number of positions in this draft document that they lay out for people to read. Where would you put the bishops on the scale from left to right, politically?

Fr. REESE: Well, they’re — on most issues of social, economic justice, war and peace they’re to the left of Democrats. They want to help the poor. On the other hand, on abortion, they’re much more with the Republicans. The bishops are not at home in either party.

ABERNETHY: And do they have the moral authority now that they used to? After the sex abuse scandal a lot of people thought that the bishops had suffered greatly in that regard. Do Catholics listen now when the bishops offer advice?

Fr. REESE: Well, I think Catholics will listen and read this document and study it. But then, you know, they’re going to make up their own minds about who to vote for, and really that’s what the bishops want them to do.