BOB ABERNETHY, anchor: Several studies recently have addressed the religious interest, or lack of it, of young adults. We wondered how religion is faring on college campuses. Lucky Severson visited Brown University in Providence, Rhode Island to find out.

LUCKY SEVERSON: Catholic Mass in the Manning Chapel at Brown University in Providence, Rhode Island. There are many other things these students could be doing on a bright Sunday morning, but they are here, trying to connect to a higher power, or maybe just to themselves, and asking for help for others.

UNIDENTIFIED STUDENT (praying): For my friend who’s been diagnosed with a brain tumor and for her family, we pray to the Lord. 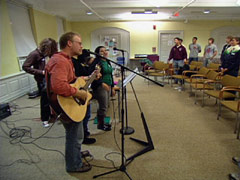 At Brown, like most universities, you can find almost any religion or no religion at all. But you will also discover an increasing number of students who are searching for some sort of spirituality in their lives.

LAURA BROWN-LAVOIE (Student, Brown University): There was something that Confucius was trying to get to about our inner humanity or something.

SEVERSON: Laura Brown-Lavoie is searching in a class on Chinese religions. She was raised in a Unitarian Universalist church.

Ms. BROWN-LAVOIE: It’s hard for a lot of people in my generation raised in that church, because we never really started with a mystical thing, and so I’m just getting to it now where I’m finding paths to mysticism on my own.

SEVERSON: Andrew Mathis is a sophomore who grew up a Catholic, but at Brown he was drawn to Buddhism and the art of Chinese lion dancing.

ANDREW MATHIS (Student, Brown University): I think the best thing about Buddhism is for every — not belief; for every idea that is presented in Buddhism there’s a clause: “Just don’t take this because somebody said so or you’ve read it, but do it because you experiment with it. You incorporate it into your life, and you know this is true.”

SEVERSON: Rabbi Alan Flam is a chaplain who heads the school’s Center for Public Service. He says students are searching for spirituality through public service.

Rabbi ALAN FLAM (Swearer Center for Public Service, Brown University): I also think the language of social justice is speaking more and more to students — that they want to live out their convictions not necessarily from a religious doctrine but from a commitment to other people and the world. And I’m not certain our institutions have responded as nimbly as they should to some of those challenges.

SEVERSON: Senior Danyel Currie thinks too many churches are missing the boat.

Ms. DANYEL CURRIE (Student, Brown Univeristy): I think it’s been a great failure of the church to basically isolate certain issues in order divide people into a kind of us versus them. There are so many other things the Bible talks about, you know, that are relevant, that people need to know about. People need to know that God cares about social justice. 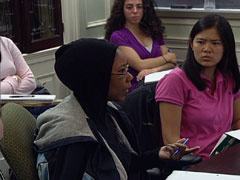 SEVERSON: Danyel plans to attend divinity school after she graduates. She says her faith has grown much stronger because she has had to defend it, to others and herself.

Ms. CURRIE: First semester I’m coming here, there’s all these philosophical arguments against the existence of God, and I can’t defend any single one of them. The professor is, you know, atheist, and I’m just kind of like, “God, I don’t know, but at the end of the day I still believe you’re real.”

Rev. NELSON: One of the things in the university we are endlessly trying to say is your spiritual tradition, the literatures of your tradition, have to be interrogated. Not all my clergy colleagues agree with me about that. Some people think nope, the Bible said it, I believe it, that’s all there is to it.

Ms. CURRIE: I had to learn that it was OK to approach the Bible and approach God in a very intellectual way and to say this doesn’t make sense, but that doesn’t mean that, you know, I can’t be a Christian anymore.

SEVERSON: Searching is encouraged here. So is questioning, even for students like Nate Johnson, son of missionaries, who felt he had to defend his faith when he first got here.

NATE JOHNSON (Student, Brown University): “This kid’s far out. He’s really in the midst of the right-wing evangelical conspiracy.” So it’s pretty crazy. Then they are shocked and then they are, like, “OK, OK, I need to respect his viewpoint.” Sometimes I feel am I talking about my faith too much? Am I annoying people? A lot more times I feel like I’m not talking enough because I don’t want people to not like me.

SEVERSON: Nate belongs to the Brown Christian Fellowship. He says as a born-again Christian he is often asked his view on gay marriage.

Mr. JOHNSON: I would say that I probably don’t attach as much importance to it as a political issue as my parent’s generation, because I see it in a different light. I still don’t believe that homosexuality is in accordance with God’s plan, but I also see that there’s a lot of love and compassion that God wants us to have.

SEVERSON: Every Thursday night there’s an interfaith supper at Reverend Nelson’s house. It’s a long-standing tradition, holding true to the reason Brown was founded. Back then, other Ivy League schools limited enrollment to specific denominations. Brown was Baptist, but welcomed students of all religious persuasions. 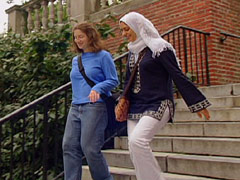 YAEL RICHARDSON (Student, Brown University): If I perchance would have a frustration with my religious community, with the Jewish community around here, then I could voice them to Atena and she would totally understand, because she experiences very similar things.

ATENA ASIAII (Student, Brown University): We had a conversation before about Muslim women leading prayer and Jewish women wanting to lead services as well, and it’s just nice to have someone to talk to who is going through that from a different perspective.

SEVERSON: Brown employs a full-time multifaith staff of five chaplains and is one of the few universities with a Muslim chaplain, Rumee Ahmed.

Reverend RUMEE AHMED (Chaplain, Brown University): I find that students are questioning their beliefs before they even get into the university, and the university is the opportunity for them to express those doubts.

SEVERSON: Noor Najeeb has had plenty of doubts and lots of questions, especially since 9/11. Noor is at a gathering breaking the fast during Ramadan.

NOOR SHEKH NAJEEB (Student, Brown University): If I didn’t want to be Muslim, I could just float through life not having these issues, not having to be questioned, not having to defend myself and my beliefs on a constant basis. But at the same time that defense — not really defense, that questioning makes you question yourself, and in questioning yourself you realize your identity.

SEVERSON: It’s not that there aren’t skeptics and atheists at Brown, but even those students, like Sarah Goldstein, seem to draw a distinction between religion and spirituality.

SARAH GOLDSTEIN (Student, Brown University): For a lot of people, maybe a belief in God is something that like sort of fills you up and like overwhelms you in a certain sense. And I feel, like, I get that feeling from others things, like, call it spirituality, I don’t know.

SEVERSON: Reverend Nelson is concerned that more and more students will be skeptical of organized religion if religious institutions don’t start dealing with more relevant issues.

Rev. NELSON: We are going to be faced with everything from stem cell decisions to genetic engineering to evolutionary questions to moral questions in this society about whether there should or shouldn’t be torture.

SEVERSON: You think that churches ought to be dealing with issues like that?

Rev. NELSON: I think they must deal with them, and when they don’t, students then say religion is inadequate. Spirituality is where I belong. And they’re right if religion is not about those issues that are framing a human life.

SEVERSON: If Brown students are typical, and most surveys show they are, the good news is that today’s college kids are resolved to find something to believe in and to make the world a more just place.

AFTER THE BABY BOOMERS: HOW TWENTY- AND THIRTY-SOMETHINGS ARE SHAPING THE FUTURE OF AMERICAN RELIGION by Robert Wuthnow SOUL SEARCHING: THE RELIGIOUS AND SPIRITUAL LIVES OF AMERICAN TEENAGERS by Christian Smith