BOB ABERNETHY, anchor: We have a profile today of the first African woman to win the Nobel Prize for peace. Wangari Maathai is a conservationist whose movement has caused the planting of 30 million trees in Kenya and also helped lead to free elections. Recently, Maathai visited Chicago, as Judy Valente reports.

JUDY VALENTE: Wangari Maathai of Kenya has been called fondly Mama Miti, Swahili for Mother of Trees. Since winning the Nobel Peace Prize in 2004, she has become an international ambassador for care of the environment.

UNIDENTIFIED STUDENT: I want to thank you for coming to this program, because it means a lot to my school and to the community.

VALENTE: She preaches a gospel of conservation wherever she goes, like this school on Chicago’s struggling west side where students recently named a garden in her honor. 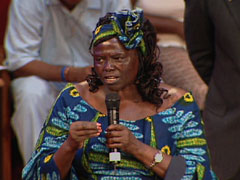 Dr. WANGARI MAATHAI (Founder, Green Belt Movement, speaking to students): Wow. Thank you very much that even before we met, you thought that you would associate me with a lovely garden such as this.

VALENTE: Her message is simple, but urgent.

Dr. MAATHAI (speaking to students): We cannot live in peace with each other if we do not manage our environment responsibly and accountably.

VALENTE: Trained as a biologist, and the first black woman in East Africa to earn a PhD, Maathai began in the 1970s speaking out against the rapid deforestation of Kenya’s once rich woodlands. The destruction of trees had led to a shortage of topsoil and fresh water. She sought international funding to put Kenya’s women to work cultivating trees. The project became known as the Green Belt Movement. Maathai says she drew inspiration for her movement from the Bible.

Dr. MAATHAI: The Book of Genesis came to mean much more to me than just a book on how God created. It helped me understand that the creation is how God has made it possible for us to live on this planet, that we need to be very grateful for what he gave us, and we need to take care if it. God would have wanted us to be his custodians, rather than dominion.

VALENTE: Maathai grew up in a village at the foot of Mount Kenya. Her family was Christian, but as a child she took to heart the spiritual beliefs of her Kikuyu ancestors who revered Mount Kenya for the fresh water it provided. They considered some trees sacred.

Dr. MAATHAI (speaking at Trinity United Church of Christ): I want to urge you that as we leave church today you look at the trees and the green vegetation with a special respect, and you thank them. You see a tree, you see a bush, you thank them for taking care of the carbon dioxide you breathe out.

The actual process of planting a tree is very, almost very spiritual. So you’re almost repeating the acts of God. There is something about touching the soil and going down on your knees. It’s almost like you are humbling yourself to the wonders of creation. 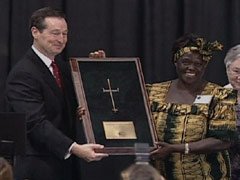 VALENTE: Maathai was educated by Irish and Italian missionary nuns and converted to Catholicism as a teen. Through a Kennedy family scholarship, she was able to attend Mount St. Scholastica, now Benedictine College, in the Midwest.

Dr. MAATHAI (speaking to students): I was recommended as one of 300 students who came to the United States in 1960, and I ended up in Kansas, where I picked up this accent. Sister Thomasita, come here, Sister Thomasita!

VALENTE: She rarely misses an opportunity to acknowledge the Benedictine sisters who encouraged her interest in science, provided support over the years, and recommended her for the Nobel Prize.

Dr. MAATHAI (with Sister Thomasita Homan on school steps): These are the sisters that are responsible for my being here for four years in Atchison, the four most wonderful years of my life. Thank you, Sister.

In Kansas, I stayed for four years with those nuns. They were like my mothers, my sisters, my family, and one of the greatest things that people still ask me is, “Why do you do what you do?” And in a light touch I like to tell them that, “That’s the nun in me.”

VALENTE: In her 2006 autobiography, UNBOWED, Maathai describes how her environmental work led her to seek democratic reforms and greater human rights in Kenya under a repressive regime. She was at various times placed under house arrest, beaten, and thrown into jail. 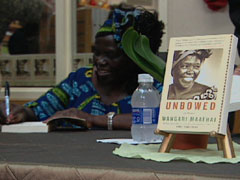 Dr. MAATHAI (addressing crowd at Al Raby School): We need to govern ourselves in a way that we promote human rights and promote the rule of law. We promote democracy and we promote inclusiveness, so that everybody in the community will feel that they are a part of that community.

VALENTE: Today, as a member of Kenya’s parliament and her government’s assistant minister of environment, she makes a strong case that caring for the environment is also a path to peace.

Dr. MAATHAI: I realized that when the environment becomes degraded and resources become scarce, people will fight over them, people who would normally call each other brothers and sisters suddenly are quite willing to confront each other. Psalm 23 is, for me, a wonderful psalm: “The Lord is my shepherd. I shall not want,” and of course when the psalmist talks about that the Lord lets me lie on green pastures, I mean how wonderful that is to lie on green pastures and to drink from waters that never go dry.

VALENTE: The divorced mother of three grown children, Maathai usually travels with her daughter, Wanjira. At 67, the Nobel laureate has embarked on an ambitious new project, the planting of a billion trees worldwide.

Dr. MAATHAI: We need at least 10 trees to take care of our own carbon dioxide, and so if you don’t have 10 trees somewhere where you can say “these are my trees,” you are using somebody else’s tree, and you ought to get up and plant your own.

VALENTE: When she tires these days from her many speeches and world travels, Maathai often takes comfort from a hymn which she first learned to sing in her native Kikuyu tongue.