BOB ABERNETHY, anchor: Vatican officials announced that Pope Benedict XVI will be coming to Washington, DC and New York City next April. It will be his first visit to the US since becoming pope. Benedict plans to meet with President Bush at the White House, officiate at several public masses, give an address at the United Nations, and visit Ground Zero. Details of the visit were revealed during this past week’s US Catholic Bishops’ fall meeting (November 12-15) in Baltimore. The bishops also issued new guidelines on political choices. Kim Lawton reports.

KIM LAWTON: The conference of bishops overwhelmingly approved a statement on faithful citizenship, urging Catholics to rely on church teachings as they shape their political conscience. The document lists a host of issues Catholics should care about, including poverty, healthcare, immigration, and housing. But the bishops placed special priority on opposing abortion and euthanasia, which they called “intrinsic evils.” 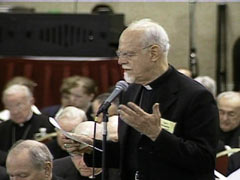 Bishop NICHOLAS DIMARZIO (Diocese of Brooklyn, New York): I think there’s a hierarchy of values, and I think the life issues really are the most important things people should think about, because without life all the rest of the issues won’t make any difference.

LAWTON: The bishops said political choices may have eternal consequences.

Bishop SAMUEL AQUILA (Diocese of Fargo, North Dakota, in debate): If we don’t warn our people that choosing intrinsic evils will have an impact on their salvation, then I believe we are failing.

LAWTON: In a separate statement, the bishops renewed their call for a responsible transition in Iraq at the earliest possible opportunity. Outgoing conference president William Skystad, speaking on behalf of all the bishops, called the current situation in Iraq “unacceptable and unsustainable.”

Bishop WILLIAM SKYLSTAD (Outgoing Conference President, at press conference): I think consistently our approach has been a call for peace, for responsible transition, and if it’s not heard the first time, maybe the second, third time, or fourth time, it might be heard.

LAWTON: The bishops acknowledged that Catholics don’t fit neatly in any party. The solution, they said, was for more lay Catholics to run for office and influence party platforms.

ABERNETHY: Kim, on this question of voting for a candidate who supports legal abortion, would it be fair to say that the bishops were against that, of course, but they didn’t exactly say never?

LAWTON: Well, the bishops said Catholics are not single-issue voters. They said there’s not a moral equivalence among all the issues, though. Abortion should be the most important. The taking of innocent, human life should be a priority for Catholic voters. But they did say there might be cases where a Catholic could vote for a candidate who held a different position if there were “gravely moral” reasons to do so. But they never spell out what those gravely moral reasons might be. And so I think that leaves it up to interpretation — how people look at, what part of the document they emphasize: the part that says abortion should be a priority in your voting decisions or the part that says, well, there might be reasons to vote for a candidate if there are other moral issues that are important.

ABERNETHY: And during the debate, the question — the word “salvation” came up. How did they come out on that?

LAWTON: The bishops ended up saying that your political choices may affect your salvation. They didn’t say you’re going to hell if you vote this way or that way. But they did say that there potentially could be grave, moral, long-term consequences — eternal consequences. This was controversial. It was actually inserted on the floor. The drafting committee had rejected this kind of language, but a lot of the bishops felt like they wanted to let their people know how important these things are.

ABERNETHY: So is there such a thing as the Catholic vote?

LAWTON: Well, the bishops didn’t tell people in their document how they should vote — you have to vote this way or that way. They said make up your own mind, and Catholics are quite divided. They’ve been traditionally a democratic constituency. In the last presidential election, a slight majority voted for George W. Bush. But in the last congressional election, in 2006, a slight majority voted Democratic. So they’ve been real swing voters, and I think how they vote in the upcoming presidential election could be very important to the final outcome.