BOB ABERNETHY, anchor: There has been a new development in the Reform movement of Judaism, the largest and most liberal branch of Judaism in the U.S. There’s a new prayer book out, and it has been designed to be useful to everyone, with more Hebrew for those who want that, and also more sensitivity to women and to contemporary values. Having more prayers in Hebrew suits those who want to worship more traditionally. But for those who can’t read Hebrew there’s English transliteration — the Hebrew sounds spelled out, and English translations and commentary for everyone. Betty Rollin tells the story. 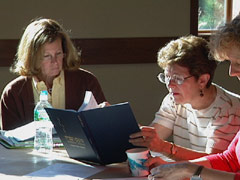 KATHY HECHT (Congregant, Barnert Temple, Franklin Lakes, New Jersey): It is a sacred time. It’s a time we all stop. On a given weekend, we are four people in four different directions, and here on a Friday night we can all come together and share something together as a family.

ROLLIN: The temple’s rabbi is Elyse Frishman, who is also the editor of Mishkan T’filah, a new reform prayer book that was 20 years in the making.

Rabbi ELYSE FRISHMAN (Barnert Temple, Franklin Lakes, New Jersey): Each person has a different theological perspective, has a different way of reaching God. How do we make certain that the prayer book touches every single person?

ROLLIN: The new book is read right to left like a traditional Hebrew prayer book, with a far greater amount of Hebrew than previous books, and much about the book is meant to reflect today’s culture.

ROLLIN: On the right-hand-side is the traditional Hebrew prayer. To its left is transliteration, that is, the Hebrew spelled out phonetically, and on the left page are interpretive writings, some of them contemporary, and on the bottom of each page are commentaries.

ROLLIN: The Reform movement, which is the largest branch in Judaism, began in Germany and was imported to the United States with the immigration of German Jews in the mid 1800s. In their wish to become modern, Reform Jews discarded many traditional rituals such as head coverings and dietary laws and rejected beliefs that they felt contradicted science. But today, many Reform Jews have returned to some of the old rituals and prayers.

Rabbi FRISHMAN (leading class): Let us dress ourselves in the garments of God.

ELIZABETH RESNICK (Congregant, Barnert Temple, Franklin Lakes, New Jersey): I love how I know every prayer, and I love how I can just sing it out loud, and it makes me feel that much more connected, quite frankly, to everyone around me.

ROLLIN: For a variety of reasons, this congregation seems to favor the new prayer book.

Ms. HECHT: The old prayer book, the style then was to do most of the prayers in English, for starters. And actually I could probably recite to you out of memory some of those old prayers. But I love the Hebrew, because that’s another way to connect with generations ago and to add a little bit of mysticism. 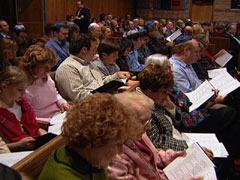 ROLLIN: But others are grateful that there is help with the Hebrew.

LISA DUGAL (Congregant, Barnert Temple, Franklin Lakes, New Jersey): There’s actually transliteration on every page. And particularly for my family and my kids growing up, and my husband’s not Jewish, it was very difficult to follow along and find meaning when you didn’t know the Hebrew, and there wasn’t that much of a connection.

Ms. RESNICK: I feel that I resonate with so many of the prayers and the stories in it in a way that I’ve never, ever connected before. I almost always choose the same one when I do my private prayer, which is about guarding my tongue from evil and really being very open to others.

ROLLIN: The first printing of the prayer book –150,000 — has sold out, but Reform Jews are not required to use it. Reform Rabbi Leon Morris, who directs a center for adult Jewish learning in New York, is one of the prayer book’s critics.

Rabbi LEON MORRIS (The Skirball Center for Adult Jewish Learning): The traditional prayer book has been around for 1,200 years. I want individual Jews to have the experience themselves of making meaning from those words, not to have it done for them. I think the prayer book is the poetry of the Jewish people, and just like we would think twice or three times about changing an excerpt from William Shakespeare in a play because we are offended by it, I think that the prayer book may warrant at least that much consideration.

ROLLIN: Rabbi Morris takes issue with the omission of a section about punishment and rewards in an important prayer, the Sh’ma. Rabbi Frishman explains the reason behind the decision.

Rabbi FRISHMAN: The language of some traditional Jewish prayers teaches that God rewards and punishes by virtue of how we behave. Reform Jews do not believe that. We do not believe that a child becomes ill or we become ill because God’s punishing us, and we regard that thinking as unethical and cruel.

ROLLIN: There are 900 Reform congregations in America. It is the hope of Rabbi Frishman and the creators of the new prayer book that it will be adopted by more and more of those congregations. And the further hope is that the prayer book’s use will attract more Jews to their Judaism and deepen their spirituality.

RESPONSE TO MODERNITY: A HISTORY OF THE REFORM MOVEMENT IN JUDAISM by Michael A. Meyer THE WAY INTO JEWISH PRAYER by Lawrence A. Hoffman