BOB ABERNETHY, anchor: As the presidential candidates step up their campaigns in the states with the first primaries and caucuses, a group called Faith in America is trying to make gay rights an election issue. Those speaking out for lesbians, gays, bisexuals and transgenders, known as the LGBT, are led by a former United Methodist minister, Jimmy Creech, who was defrocked for marrying a gay couple. Creech speaks of trying to end what he calls religion-based bigotry. This past week, the Faith in America group ended its campaign in South Carolina with a town hall debate in Greenville between Christian evangelicals and the campaign’s organizers.

Reverend JIMMY CREECH (Executive Director, Faith in America): We believe that when people understand the larger context in which religion has been misused to justify discrimination that they will better understand how it’s being misused today against lesbian, gay, bisexual and transgender people. 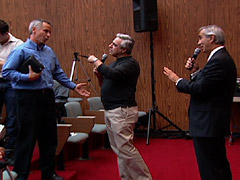 ABERNETHY: In response, a group of evangelical ministers has taken issue with Faith in America’s charge that the Bible has been misinterpreted.

KEVIN BOLING (Mountain Bridge Bible Fellowship Church, Travelers Rest, SC, speaking at radio interview): There’s a major discrepancy here and a contrast between our view of the Bible and the view of the Faith in America group. We’re not hateful of the homosexual. We condemn all criminal acts of violence.

The premise is if we speak what we believe, if we say that homosexuality is sin, that in some way this is going to result in violence against those in the gay community.

Rev. CREECH: I do know that the climate of hostility is promoted by religious-based bigotry.

Mr. BOLING (speaking at town hall debate): This group seems to be all about tolerance, but there doesn’t seem to be much tolerance for people that hold another opinion.

Rev. CREECH (speaking at town hall debate): In the history of this country there have been devout people of faith with sincere religious beliefs who have maintained structures of injustice because of their religious beliefs: slavery, segregation, religious persecution, inequality for women.

ABERNETHY: Mitchell Gold, a successful businessman, is the founder of Faith in America.

MITCHELL GOLD (Founder, Faith in America, speaking at town hall debate): So I just want to be clear to everybody that it is not my intention for this to be church bashing. This is an intention for people to talk and say their piece.

Rev. CREECH (speaking at town hall debate): It doesn’t have to do with biblical interpretation. It has to do with citizenship in this country.

Mr. BOLING: I’m not going to say that I’m glad they came and had this campaign, but we are talking about it. Here’s an opportunity for us to speak persuasively, yet in love, as to what the Bible says, and that’s a good lesson for the Christian community.

Rev. CREECH: We really do believe that conversation, that dialogue, that being together in a civil, neutral setting will make it possible for us, first of all, to understand one another better, and then secondly to begin to recognize the need for change.

ABERENETHY: The Faith in America campaign has also been in Iowa. It’s planning campaigns in New Hampshire and Nevada.

Faith in America Calling for Truth