DEBORAH POTTER, guest anchor: Folk singer Judy Collins has recorded 44 albums. She’s won two Grammys and been inducted into the Grammy Hall of Fame. Collins is internationally known as a performer, but now she’s speaking more openly about her personal life. Kim Lawton visited Collins in her New York City home to talk about spirituality and the role it can play in recovering from tragedy.

JUDY COLLINS (performing “Both Sides, Now” on stage): Bows and flows of angel hair and ice cream castles in the air . . .

KIM LAWTON: It’s been said many times that she has the voice of an angel. So it comes, perhaps, as no surprise that for Judy Collins music is a deeply spiritual endeavor.

Ms. COLLINS: It’s always mystical in a way, and it heals me. And it heals other people. 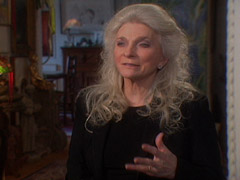 (performing “Suzanne” on stage): Jesus was a sailor when he walked upon the water . . .

LAWTON: Her ethereal voice has charmed fans for nearly 50 years. But behind the scenes, Collins has dealt with devastating pain and loss. In 1992, Clark, her only child, committed suicide at the age of 33 after years of battling alcoholism, drug addiction, and depression. Collins’ music and her spirituality, she says, have been central to her journey of recovery.

Ms. COLLINS: I find that the transcending idea of appreciating being alive, which I certainly didn’t feel at first, has come slowly but surely, and with it a conviction that there is, in a sense, a kind of responsibility to have the most joyful and the most productive life that I can, even in the wake of that kind of loss.

LAWTON: In 2003, Collins wrote a book about that journey called SANITY AND GRACE. Earlier this year, she finished a new book called THE SEVEN T’S, which offers guidance to others experiencing catastrophic loss.

(performing “Wings of Angels” on stage): A place where you would long to fly . . .

LAWTON: Some of Collins’ meditations found their way into a song called “Wings of Angels,” which she wrote not long after Clark died.

Ms. COLLINS (performing “Wings of Angels” on stage): Wings of angels, tears of saints. Prayers and promises won’t bring you back…

LAWTON: She only recently recorded the haunting lyrics.

Ms. COLLINS: They hung around for a long time before I had the courage to sing them — before I could bear singing them. 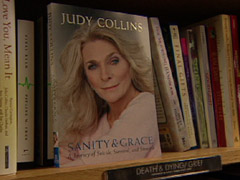 LAWTON: The centrality of music is obvious in the Upper West Side apartment in New York that Collins shares with her husband, Louis Nelson, who designed the mural on the Korean Veterans Memorial in Washington. Also obvious are the diverse spiritual influences that have shaped her path. Collins grew up a United Methodist, she says, with some free-wheeling Emersonian philosophy thrown in. That combination was the foundation of her long-time liberal social activism.

Ms. COLLINS: The attitude in the family was you take part in the society, and you try to make a difference, and you try to be proactive for the things that you believe are right.

LAWTON: She began singing in church choirs at an early age. It was her grandmother who taught her the hymn that would become one of her signature songs.

Ms. COLLINS: (singing “Amazing Grace” at church service): Amazing grace, how sweet the sound, that saved a wretch like me . . .

Ms. COLLINS: I’m fascinated by the process of how the Eastern religion fits into my life, how Buddhism may affect me. You see in the house there are a number of Buddhas and figures. There’s St. Francis, too, but there are a lot of Buddhas from around the world.

LAWTON: Collins says she tries to meditate several times a day, using silence and different kinds of breathing and prayers.

Ms. COLLINS: I have to move things aside a little bit so that I can be available for the thoughts and the ideas and the inspirations. It’s very important.

Ms. COLLINS: I don’t know what I would call it. I think there’s a force in the universe that is available when I get desperate enough to reach out for it. 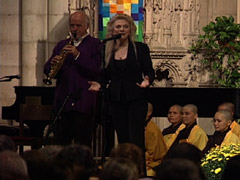 Ms. COLLINS: They say that if you’re doing one practice, any one of any number of practices, that if you are doing it in a serious way the other kinds of practices and kind of traditions will open to you as well.

LAWTON: She says she still loves church, too. She often prays at St. John the Divine, the Episcopal cathedral where she and Nelson were married 12 years ago. And she’s a voracious reader of spiritual books. When I spoke with her, she was reading about Jesus.

Ms. COLLINS: I think of Jesus as a total rebel because he was saying things that were completely out — forgive your enemies? Are you kidding? What a concept. Very revolutionary, actually.

LAWTON: At 68, Collins says she’s come to believe that loss is part of God’s plan for everyone.

Ms. COLLINS: I don’t think that people learn about certain kinds of things in life unless they experience loss, and we’re losing from the time we get here.

LAWTON: But she says grace is also part of the plan, which is why she so cherishes the hymn “Amazing Grace,” even after all the thousands of times she has performed it.

Ms. COLLINS: (performing “Amazing Grace” on stage): Through many dangers, toils and snares . . .

(performing “Amazing Grace” on stage): That saved a wretch like me . . .

LAWTON: When you sing it, does it still have that meaning?

COLLINS: Well, it has to. It has to. I mean, otherwise I would have to stop singing it.

(performing “Amazing Grace” on stage): I once was lost, but now I’m found, was blind but now I see.