DEBORAH POTTER, guest anchor: Last week, the US government said more than 35 million Americans went without food at some point during 2006. This week, the non-profit group Bread for the World issued its own report recommending strategies for the US to combat hunger. Bob Abernethy sat down with David Beckmann, Bread for the World president and a Lutheran pastor, to discuss hunger in this country and what can be done about it.

Reverend DAVID BECKMANNN (President, Bread for the World): Thank you.

ABERNETHY: Put some flesh and blood, if you would on the statistics: 35-and-a-half million people in this country who — what happens?

Rev. BECKMANN: Well, in our country it’s not hunger like Ethiopia. The typical pattern of hunger in our country is that the family runs out of food. They may have food assistance from the government, but food assistance runs out by the end of the third week of the month. It’s not enough. So the moms go without food. The kids go without food maybe the last few days of the month. So then the whole month they don’t buy good-for-you food. They don’t have quite enough food.

ABERNETHY: Is this all over? All kinds of people? 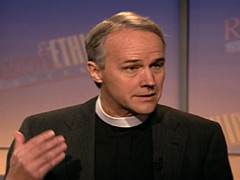 Rev. BECKMANN: It is all over the country. It’s especially children, especially little children. In our country, one in four children under the age of six lives in a household that runs out of food, and even moderate under-nutrition does real damage, because the nutrition goes to the vital organs and the brain half shuts down. So kids aren’t alert. They’re naughty. By the time they go to kindergarten they’re acting up. Letting so many kids go hungry does real damage to our whole nation.

ABERNETHY: You at Bread for the World, you’ve been fighting this, fighting hunger for a long time. But your emphasis has shifted or is shifting from emergency measures to trying to fight poverty itself?

Rev. BECKMANN: Well, both. We’re working this year on farm bill reform, which is a good way to both deal with food assistance for hungry families and helping some families get out of poverty. Much of the money in the farm bill goes to affluent families; some very wealthy landholders have money in the farm bill. So there’s an opportunity this year to shift some of those resources, first, to farm and rural families who really need help to make a living; and then also to strengthen food assistance to hungry families in our country.

Rev. BECKMANN: Well, Bread for the World works on both hunger worldwide and in our country, and the irony is that the world is making progress against hunger and poverty. Countries as diverse as China and Uganda and Chile are making progress, while in the USA, at least in this decade, we’ve been going the other way. We have more hungry and poor people in the country than we did in the year 2000.

ABERNETHY: And working people are hungry?

Rev. BECKMANN: Absolutely. It’s increasing numbers of working people. Nowadays, you know, if you go into a McDonald’s and there’s a lady behind that cash register, if she’s got kids at home those kids aren’t eating all the time. I’m a preacher, so I believe that if you don’t work you shouldn’t eat. It’s in the Bible. But the corollary is if you do work you ought to be able to eat, and that’s not true in our country anymore.

ABERNETHY: David Beckmann of Bread for the World, many thanks.

Birth Control in the Philippines
Tags: Bread for the World, hunger, Nutrition, poverty