DEBORAH POTTER, guest anchor: Benedict XVI heads to the U.S. this coming week (April 15-20) for his first visit here since being elected pope three years ago. He’ll be spending a total of five days in Washington, D.C. and New York. The Vatican released a video message from Benedict urging Americans to pray for the trip:

Pope BENEDICT XVI: I am very much looking forward to being with you. I want you to know that, even if my itinerary is short, with just a few engagements, my heart is close to all of you, especially to the sick, the weak and the lonely. 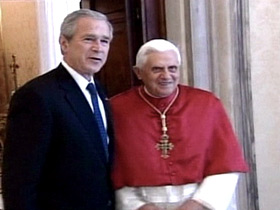 DEBORAH POTTER: Benedict arrives in Washington Tuesday (April 15). The next day, he’ll have a private meeting with President Bush at the White House, where the war in Iraq is expected to be high on the agenda. On Friday (April 18), Benedict travels to New York, where he will address the United Nations General Assembly. The UN event was his original reason for coming to the US, and many experts believe that speech could be the most important of his trip. Kim Lawton takes a look at the unique role the pope and the Vatican play on the world stage.

KIM LAWTON: Soviet leader Josef Stalin was once questioned about the influence of the Vatican. Stalin is famously said to have replied, “The pope? How many divisions has he got?” The answer, as it turns out, is more than Stalin and many others might have guessed. Experts say the pope and the Vatican wield considerable global influence. 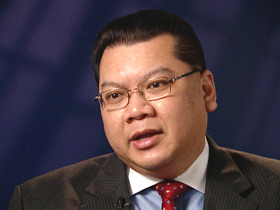 LAWTON: As the Bishop of Rome, Pope Benedict XVI is the spiritual head of the Roman Catholic Church worldwide. But he also wears another hat: head of state for the independent territory of Vatican City and the Catholic Church’s government, called the Holy See.

Professor J. PETER PHAM (Director of the Nelson Institute for International and Public Affairs, James Madison University): It’s the tension between those two roles that actually gives him a resilience on the international stage, that he doesn’t just speak for a geopolitical unit but also for a demographic within the world.

LAWTON: The Holy See has played an active global role for centuries. It has permanent observer status at the United Nations and has all the rights of full UN membership except voting. The Holy See has formal diplomatic relations with 177 countries around the world, including the US. Ambassadors, called apostolic nuncios, represent the Holy See from embassies like this one in Washington, DC. The US has sent an ambassador to the Holy See since 1984. The current U.S. ambassador at the Vatican is Harvard law professor Mary Ann Glendon, who took up her post in February. James Nicholson held the position from 2001 to 2005. 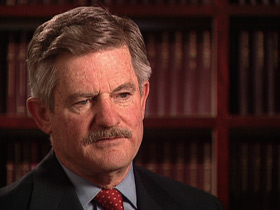 LAWTON: During the more than 25 years of his pontificate, John Paul II dramatically raised the profile of the papacy on the international level and played a key role on many fronts, such as helping to bring down communism in Eastern Europe. Throughout his extensive travels, he was a vigorous global voice for freedom, human rights, peace, the alleviation of poverty, and fostering what he called “a culture of life.” Benedict has continued that advocacy, which experts say reflects foundational Catholic beliefs.

Reverend THOMAS REESE, S.J. (Senior Fellow, Woodstock Theological Center, Georgetown University): We have a moral obligation. Jesus told us to feed the hungry, care for the sick. These are things that are — impact international relations. It’s not just about economics and power. It’s about moral and ethical issues.

LAWTON: The policy goals may be the same, but times have changed since John Paul became pope.

Rev. REESE: We don’t have the Soviet Union anymore. What we have is the problem, problems in the Middle East, which is where Pope Benedict has been directing his attention.

LAWTON: The personalities have also changed.

Prof. PHAM: Whereas John Paul, if you look at the entire pontificate, was very much outwardly oriented toward the Church and the world, I think Benedict is inwardly focused — that in order to engage the world Benedict’s view is the Church has to be stronger from within.

Mr. NICHOLSON: Benedict is more cerebral, no question, more professorial. If he wasn’t being pope he would probably be a professor. 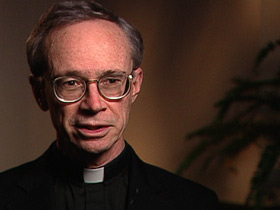 LAWTON: Some analysts believe that academic impulse has created a foreign relations challenge.

Rev. REESE: Benedict has had some problems on the world stage, because I think sometimes he thinks he’s still in a classroom where he can use words that have technical meanings that he has defined and that students are supposed to understand and know. But when he says them on the world stage, people take them at their street level meaning, and as a result there’s misunderstanding.

LAWTON: The most obvious example was his 2006 speech at the University of Regensburg in Germany, where he quoted a 14th-century emperor who criticized the Prophet Muhammad and accused Muslims of spreading their faith by the sword.

Rev. REESE: He spoke about Islam as being irrational. Well, what he meant was that it’s a religion based on faith, where faith is much more important than reason, you know. He wasn’t saying that Muslims are irrational, you know, but that’s the way it was heard.

LAWTON: The speech set off violent protests in several Muslim nations, a vivid demonstration of the impact a pope’s words can have. The Vatican issued a clarification, and during a visit to Turkey Benedict made a high profile visit to a mosque.

Prof. PHAM: On one hand, a great deal of setback in dialogue certainly occurred. On the other hand, after the initial setback a number of moderate Muslim scholars actually wrote to the pope, 138 of them, and said, “Well, we have some differences clearly, but now that they’re highlighted maybe we should engage in a dialogue,” and so a process of dialogue has begun. 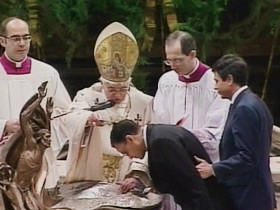 LAWTON: But Benedict again generated controversy in the Islamic world on the Saturday before Easter, when he baptized a prominent Muslim journalist at a service in St. Peter’s Basilica.

Prof. PHAM: It could have occurred anywhere. The parish priest could’ve done it very quietly, discreetly. But I think the pope chose to do it himself and highlight it to emphasize the principle of religious freedom. Religious freedom cuts both ways. It’s not just freedom to practice one’s faith, but also freedom to change it.

Mr. NICHOLSON: He saw Iraq differently, there was no question about that, and spoke in January of ’03 saying no to war — a real challenge for me as the interlocutor between the president and our government and him and his government.

Prof. PHAM: Christians are leaving Iraq in huge numbers. This is a community that’s been there since the time of the apostles, and so I think Benedict’s concern now is the survival of Christianity in this ancient land and the fate of those Christians who are now refugees. 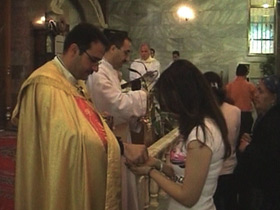 LAWTON: Other foreign policy priorities for Benedict include pushing for peace in the Holy Land and decrying rising secularism in Europe. On another diplomatic front, even though Benedict has criticized human rights abuses in China, he’s also been quietly working to establish relations, something that was not possible during the last papacy largely because of John Paul’s role in the fall of communism in Poland.

Rev. REESE: The Chinese obviously didn’t want John Paul II running around China doing the same thing. Pope Benedict is not that kind of a threat to China, so I think they’re more comfortable in working out some kind of an arrangement.

LAWTON: Most of the time in places around the world, Vatican diplomats work outside the spotlight, where experts say they often have an advantage.

Prof. PHAM: They’re also there as religious representatives of the pope and therefore have close contacts with the local church, and the local church is often, in many countries, the closest to the people, and so their sources of information are often much better than that of, say, an embassy of a large Western country where for security reasons most of the diplomats are essentially living in a fortress. 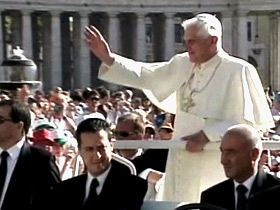 LAWTON: Some question how much government leaders of today truly listen to what the pope has to say.

Mr. NICHOLSON: The pope will also say that we’re in an era of what he calls the “dictatorship of relativism,” and that indicates that there will be too many people, probably in his view and in mine, that won’t listen. But many will.

Prof. PHAM: Even if diplomats reject the Holy See’s position, which they often do on a number of issues, at least it gets them thinking that perhaps they will look to their own faith traditions or perhaps they’ll look to their own ethical systems, that there is another calculus involved other than the strict material calculus of power, security, and influence.

LAWTON: And that, observers say, is a moral authority that can’t be measured by economic strength or military divisions — a moral authority Benedict hopes to draw upon when meeting with US officials and speaking before the United Nations.