Barack Obama cannot help that the election campaign until now has been mostly about him — his background, his personality, his race, his politics, his oratory, his church, his newness, his inexperience, his family, his primary victories, his victory over Hillary and Bill Clinton, his rock star tour of Europe. His star power and unprecedented attainment of the Democratic nomination have made him, inevitably, the chief subject of the campaign thus far, with or without Republican attack ads. 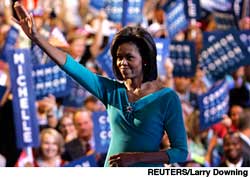 But the Democrats have two chief tasks at their convention this week. One is to shift the focus to the Republican record of the past eight years and the unacceptable prospect of a third Bush-like term. The other is to make a hugely favorable impression on the tens of millions of Americans who haven’t paid enough attention thus far to make a decision about Barack Obama. The fact that these goals are contradictory does not lessen the urgent necessity of either one.

This is a blow-out election year for the Democrats. The incumbent Republican administration has done a bad job; seventy percent of Americans say so. Approximately the same percentage say the same thing about the administration’s handling of the economy and the war in Iraq, two things that go together, given the staggering costs of the war.

In a normal election year, any one of these three issues would be enough to dispatch the incumbent party, and the watershed elections of the past 75 years have been two-for-three affairs. 1932 was a referendum on a disastrous economy and a failed presidency, but no war; 1968 was about a disastrous war and a failed presidency, but the economy grew anyway; 1980 put Jimmy Carter’s presidency and economic performance on trial, but it was mere piling on to claim that Carter botched the Cold War and embarrassed the U.S. in Iran. This year marks the first legitimate three-for-three election of modern times, and Democrats are going to clean up — except, perhaps, at the top of the ticket.

The very real possibility that Democrats will lose the presidential race despite their enormous advantages is scaring many of them. I hear it all the time on the lecture trail. “Do you really think that Obama can win?” anxious liberals ask me, especially academics. The question is not, “Will he win?” but, “Do you think it’s even possible?” Others are already bracing themselves against disappointment, muttering quietly, “You know he’s going to lose, don’t you?”

No, I believe that he can and will win, and I think he is the most compelling candidate and human being to be nominated by either party in my lifetime. But I understand the anxious foreboding of many Democrats, because I have a good deal of it. The Republican field, the weakest in memory, had only one candidate, John McCain, who had any chance of winning the presidency this year, but the Republicans lucked into nominating him. If the Democrats had nominated one of their usual bland, white, male, career politicians — think John Kerry in 2004, Al Gore in 2000, or Walter Mondale in 1984, or this year Joe Biden or Chris Dodd — they would be leading handily in the polls. Hillary Clinton probably would be leading by a smaller but still sizable margin at this stage, too.

Obama, the candidate I have supported since the day he entered the race, has a much steeper mountain to climb, even among Democrats. Approximately 27 percent of Hillary Clinton’s supporters report that they are not willing to switch to Obama. That is the third most pressing problem that Democrats have to deal with this week.

Michelle Obama’s luminous, beautiful, wonderfully personal address went as far as one speech possibly could to deal with the personal side of the electoral equation. Her buoyant expression of her faith and hope had perfect pitch for the occasion and its urgent necessity of reaching across a disturbing popular divide in the American electorate.

According to a mid-July New York Times/CBS News Poll, thirty percent of white Americans hold a favorable view of Barack Obama, and 24 percent view Michelle Obama favorably. These pitiful numbers are the yield, thus far, for the Obamas among white Americans after two years of overwhelmingly favorable news coverage, countless magazine cover stories, and dozens of primary and caucus campaigns that ended with a soaring victory speech.

Michelle Obama obviously understands that she and her husband must reach the reachable in a personal way before they change the subject to the Bush debacle and John McCain’s guardianship of it. To the extent that one speech can do that, it was done on Monday night.

Now, we will see how many Americans are actually reachable, and if the Democrats are able to highlight Obama and change the subject at the same time.

— Gary Dorrien is the Reinhold Niebuhr Professor of Social Ethics at Union Theological Seminary and professor of religion at Columbia University.