JIMMY CARTER, vocals: (on stage) Sit back, relax and listen to the Blind Boys.

The Blind Boys started out in a little town in Alabama called Talladega. The group started out June the 10th 1944.

Music: All you need is faith to hear the diesels humming. You don’t need no ticket. You just thank the Lord. 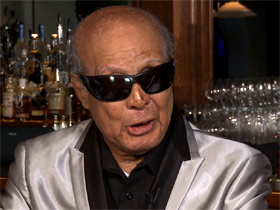 RICKY MCKINNIE, vocals: The Blind Boys is a group that's not blind, they just can't see and that means they might have lost their sight, but they never lost their direction.

Music: I shall not be moved.

CARTER: We feel that we were called by God to do this work.

Music: When God shut Noah in the grand old ark, he put a rainbow in the clouds.

MCKINNIE: No matter what the situation is, I'll find a way. God will find a way. Like the bible says, “If you trust in the Lord, he'll make a way” and that's what He's done for the Blind Boys.

CARTER: Gospel is the good news of God so we tell the world about God. 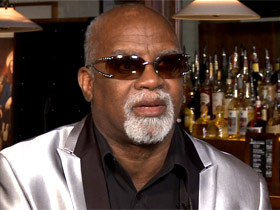 CARTER: There have been times where we had to change some of the lyrics and make it into a gospel song that we feel comfortable with. It becomes a Blind Boy gospel song.

Music: I’m gonna keep on trying ‘til I reach the higher ground.

JOEY WILLIAMS, guitar: There will never be any peace til God is at the conference table.

Music: There will never be any peace until God is seated at the conference table.

WILLIAMS: We heard the words and then it was meaning so much because of what was going on today so we heard it and we put it down and it sounded so good and it felt better than it sounded. So we said we're going to be keep it so now we sing that one every night and it means so much to all of us.

CARTER: We've been around a long time and God has kept us, He has provided for us and we've had some of our people to pass away, he always sends other people to fill in so that means we are doing something that is pleasing to Him.

Religion & Ethic NewsWeekly talked with the Blind Boys of Alabama about gospel music and the spiritual dimensions of their new album, “I’ll Find a Way,” produced by Justin Vernon of Bon Iver, when their current tour brought them recently to Washington, DC. The group collaborates here with many young musicians, including Shara Worden on the title song. Produced by Lauren Talley and Nick Liao. Interviews by Nick Liao. Edited by Lauren Talley.