BOB ABERNETHY, anchor: Now, the financial crisis and proposals to solve it. What do religious voices have to say?

Reverend Jim Wallis is an evangelical minister, a writer and the editor of Sojourners magazine. Father Jim Martin is a corporate executive turned Catholic priest. He's an editor of the Jesuit magazine America. He joins us from New York.

Father Martin, welcome. What are the religious principles that all of us should bear in mind as we try to evaluate the different proposals for getting out of this crisis? 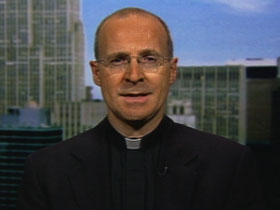 Father JIM MARTIN (Editor, America Magazine): Well, I'd like to go from the general to the specific. You can start with the Jewish and Christian principles of caring for the poor, which is very important in both the Old and the New Testaments. Jesus speaks about that very forcefully. More specifically, the Catholic tradition in their social teaching documents talk about solidarity with one another and the common good. It's not just every man in it for himself, or every woman. You know, we Jesuits talk about not making decisions in a time when you're freaking out. So there's a sort of discernment that's needed. And then, finally, I think that the role of conscience needs to play in this. There's a reason why people feel uncomfortable with so many people making money and with the bailout possibly helping only the wealthy, and I think the reason people feel that sort of uncomfortable feeling is conscience. I mean, it's telling us that something's wrong when only the wealthy benefits, so I think those are some of the principles.

ABERNETHY: But, Jim Wallis, whatever we do has to be something that, first of all, is practical, perhaps. Does it work? Does it work for the whole economy, and does it also work for the very poor?

Reverend JIM WALLIS (Editor-in-Chief and CEO, Sojourners Magazine): Well, I'm an evangelical convert to Catholic social teachings, so I'm going to agree with Jim about all this. You know, this crisis is structural and spiritual both, and this has come about because private gain, greed, has prevailed over the common good. We've lost sight of what the common good is, and it's true, there's a conversation going on about rewarding the people who are indeed most responsible for the crisis.

ABERNETHY: And lots of people are very angry about that. 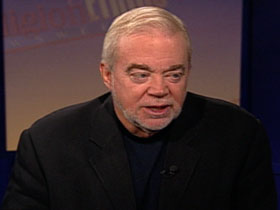 Rev. WALLIS: And they should be. I think God's angry at that. Someone suggested the other day, I thought it was a good idea, the CEOs should be paraded down Wall Street in sack cloth and ashes. I think that's true. So rewarding them while you leave people in my hometown of Detroit -- my brother has a $130,000 mortgage; his house is worth $60,000 now, so this is wrong. So the principle is common good and justice. But also I would say this is a moment, a teachable moment to talk about habits, practices, assumptions about greed that we've lost conversation about for a long time.

ABERNETHY: Father Martin, there's also a question about power and putting a lot of power in one person's hands. I gather that that's being addressed, that there is going to be, in whatever comes out of the negotiations, there is going to be a serious effort not to have one person solely responsible for what to do with all that money.

Fr. MARTIN: Well, I hope so. I mean, I think that, you know, you speak even to the experts who say they're not sure how the plan would work. They're not sure how much money is required, and so to put one person in charge to me just, you know, based on sort of simple economics doesn't seem to make a lot of sense. You know, I also want to agree on what Jim Wallis said. You know, I think it is kind of a culture of greed. You know, I was thinking the other day, you have TV shows like "Flip this House" on A&E, and, you know, it's something that everyone seems to have been infected by, and I think getting back to that notion of the common good, that this bailout should not just be from the top down but from the bottom up as well, is really important. I think that the people that also need some lobbyists are the poor.

ABERNETHY: Yeah, but to both of you, there's a need, isn't there? I mean greed is an important motivator in the kind of economy we have. So it's not just a question of greed is it, Father Martin? It's a question of unregulated greed, and if the greed is controlled, if that can happen, then that's better, isn't it?

Fr. MARTIN: Right. I mean, I still believe in the capitalist system, and as Adam Smith would tell you, self-interest is what motivates that. So I'm not saying that needs to be set aside. What I'm saying is that the capitalist system, as we've seen, is not perfect, and you do need regulation, you do need the government to step in and care for such things. You know, we look at education, and people are fine with the common good there. I think we have to expand our notion on what the government, on what society needs to do in terms of their responsibility to the poor. 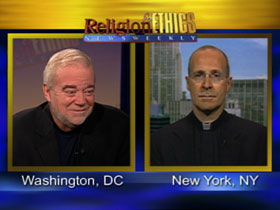 Rev. WALLIS: I think government should encourage innovation, but it must limit greed. Self-interest and success is one thing. Losing sight of what is best for the common good is another thing. So capitalism run amok here is really what's happening, and so restoring a sense of what's good for all of us is, in fact, the best business model. So we've lost something here.

ABERNETHY: So, which is to say oversight by Congress and by the firms themselves?

Rev. WALLIS: Yeah, and social regulation is going to be necessary. But I would say self-regulation will, too. Jim is right. We've all got into this culture of greed, the culture extolling greed as a value. In D.C., property values have doubled in four years. So what do they say? Take your equity value and take a loan against that and buy another house, and then you can rent that and pay for your mortgage and then buy a third house. The prophets say you add house to house to house to house -- the whole thing falls apart, and that's what's happened, from Wall Street right down to a lot of our own families.

ABERNETHY: Father Martin, just step back just a minute and, quickly, what are the big lessons here about, maybe, things that go beyond just the bailout itself?

Fr. MARTIN: Well, I think one thing is that, you know, these assets were highly valued because they were risky. In economics there's a risk-return relationship, and I think one of the things we see that hasn't been commented on is just that the CEOs sort of lost the sense of personal responsibility to their investors and, you know, to the people they were giving mortgages to. I mean, you know, you check out a lot of magazines in the past few months, they were talking about the coming collapse. It's not, you know, it's not as if people didn't know this was going to happen, and yet the investment was still being made. So I think there's a certain level, I agree with Jim Wallis, of personal responsibility that needs to be accepted by the CEOs. So in other words what I'm saying is it points out is that, you know, people really do have the responsibility for making conscientious decisions in the workplace.

Rev. WALLIS: I think there's an opportunity here for redemption. If our congregations begin to look at these questions -- we ought to have adult Sunday school curriculum on money and how to be responsible in our economic lives. That could be a real opportunity for the pulpit to get involved here and start talking about what Christians and Jews and Muslims ought to do in responsible ways about how they live.

ABERNETHY: Reverend Jim Wallis of Sojourners and Father Jim Martin of America magazine, many thanks to you both.

What do religious voices have to say about the economic crisis and the proposals to solve it?

Sequestration and the Poor