BOB ABERNETHY, anchor: Our reporter Judy Valente in Chicago has a moving story today of a young violinist, once a child prodigy on her way to world-class status, who was struck down in a terrible accident. But she’s coming back now, with great courage and faith. Her name is Rachel Barton Pine.

JUDY VALENTE: Rachel Barton Pine is playing the music of Johann Sebastian Bach. When she was just three years old, she heard Bach being performed at her church, St. Paul’s United Church of Christ on Chicago’s North Side.

Ms. PINE: The sound of the violin was intriguing, and according to my parents, I jumped up on my seat in the pew and said, “I want to do that.” 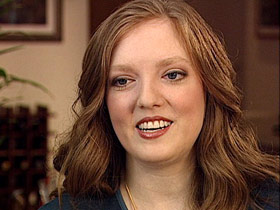 Bach has been such an important part of my life for so long. The stained glass window of Bach is still there among the various characters from the Bible. You know, as far as I was concerned Bach was right up there with the saints. There’s something about his music, both listening to and especially playing it. I can really feel the presence of God.

VALENTE: This performance of the Boccherini minuet was recorded. The violinist was five years old. She made her orchestral debut at age seven. She liked playing, but mostly she played the violin, practicing as many as eight hours a day. At the age of 10, she was chosen to play in a young performers competition with the Chicago Symphony.

Ms. PINE (as a young girl, from file footage): Lots of people will watch me on TV, and I’ll start getting famous, and the Chicago Symphony isn’t just any old orchestra. It’s a big, super-duper orchestra.

VALENTE: Howard Reich is an arts critic for the Chicago Tribune. 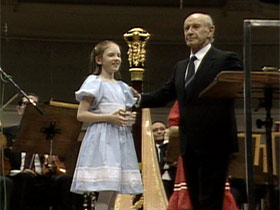 VALENTE: Even as she performed with the Chicago Symphony, her family struggled with financial problems. The income she earned through her talent had become essential to her family’s support.

Ms. PINE: My father was unemployed most of the time. Just even paying for the gas to put in the car to drive to the lessons, sheet music purchases, concert clothes which we would very often get at the thrift store and then try to fix up — these were real difficulties in the life of my family.

VALENTE: She won for her performance with the Chicago Symphony. She would later become the first American to win the gold medal at the Bach International Competition in Germany.

Mr. REICH: She racked up so many awards that everyone predicted a global career for her. Everything was ready. She was exactly where she needed to be. 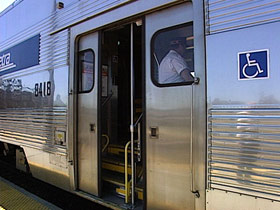 VALENTE: Her debut CD won rave reviews from music critics. She seemed poised on the verge of a spectacular career. All that changed on a frigid morning in January 1995. Twenty years old at the time, she had taken a Chicago commuter train to the suburbs where she was to give a violin lesson. As she got off, the doors closed behind her, but her violin case was still inside the train with the strap attached to her arm. The train began to move, dragging her along. As she pulled free of the strap, her legs swung into the path of the wheels. Her left leg was severed, her right leg badly mangled.

Ms. PINE: In that moment, when I was with God, it was really that I had a choice, that God was offering me a choice that I could either stay or return. In that moment, everything that I had always believed about the meaning of my life was just crystal clear to me. I had not yet done all the things I had been put on earth to do.

VALENTE: Within a year of the accident, she was playing the violin from a wheelchair. She has undergone 40 surgeries. Today she walks with prosthetic devices. Regular physical therapy continues. So does considerable pain.

Ms. PINE: There was a period of time just after I was injured right at first when I couldn’t play my instrument because I was just too ill to even sit up in bed and have that kind of strenuous activity. And so far from music being able to sustain me during this difficult period of time, you know, instead I had the added worry of wondering when I would ever be able to make music again. 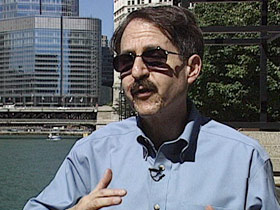 Mr. REICH: Then when she started to rehab and recover and was ready to go back into the world and try to claim her glory, it was too late, because the next wave of young fiddle stars was taking those prizes and those concerts. She almost had to start over.

Ms. PINE (showing Valente her violin): Well, my violin was made in the year 1742 by Guarneri del Jesu.

VALENTE: She travels constantly, both in the U.S. and abroad, and still dreams of performing in the great concert halls with the great symphonies. She says it has never occurred to her to be angry at God.

VALENTE: Nine years after her injury, Rachel married Greg Pine, appearing in public without crutches for the first time. She was awarded millions of dollars in damages for her injuries and has established a foundation to help young, disadvantaged musicians around the world. But her taste in music is not limited to the classics. 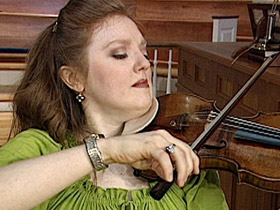 Ms. PINE: I decided to have my dressmaker sew patches of my favorite bands on my violin case.

VALENTE: As performed by the heavy metal group Pantera, this is the song “Cowboys from Hell.”

This is “Cowboys from Hell” as performed by Rachel Barton Pine.

Ms. PINE: I’ve come to believe that even heavy metal is kind of like praying the Psalms, where you are crying out in a loud voice and moving through moments of great passion.

Playing things like my variations on the birthday song, that kind of music, it’s not a profound worship experience to play it, and yet I still do believe God is there, because who gave us our human potential to do these physically amazing things?

VALENTE: The story of Rachel Barton Pine could be simply a story of lost opportunity, of the unfairness of life. Or it could be a story of resurrection in which, in spite of horrific injuries, her talent endures, her music is heard.

Mr. REICH: She might over the long haul establish herself as a world-class violinist through the interesting recordings she’s doing and the really good performances she’s giving. The world has not still discovered her.

Ms. PINE: I’m so excited to be alive right now and doing what I am doing, traveling all over and sharing music with people. It’s just a great joy, and I feel like it’s what I was always meant to do, and I’m so happy to be doing it. The inspiration to play the notes the exact way that they are coming out with all the inflections and phrasings and emotions behind the notes, you know, where does that come from? That inspiration, I really believe, is God’s presence.

VALENTE: For Religion & Ethics NewsWeekly, this is Judy Valente in Chicago.