Our Belief and Practice segment today centers on the High Holiday concepts of sin, repentance, and forgiveness, as explained by Rabbi Dan Ehrenkrantz, president of the Reconstructionist Rabbinical College in Philadelphia. 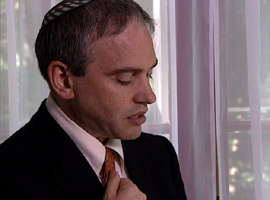 When I recite the al Cheyt prayer I may be reciting a litany of sins, some of which are my very own, but some of which are not mine. Yet we say the prayers in the plural because we understand if these things have occurred within our community, in some ways we are responsible.

The most common Hebrew name for sin is Cheyt. Cheyt means something akin to going astray. It’s actually a term that is used in archery. So if you can imagine an arrow which is being shot from a bow that is directed towards a bull’s eye that is the trajectory of our lives.

Rabbi DEBORAH WAXMAN (Vice President, Reconstructionist Rabbinical College, singing prayer): And for the wrong we have done before you through an evil inclination.

Rabbi EHRENKRANTZ: The steps of teshuvah, of repentance, would involve understanding how you had hurt someone and then approaching that person for forgiveness. 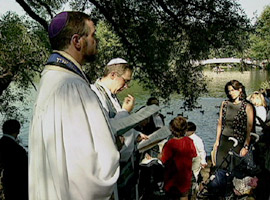 Tashlich is a ceremony in which Jews will traditionally join together and cast breadcrumbs from their pockets, as it were, to symbolize the sins. The idea is that we are casting our sins out.

There is in Judaism no idea of original sin. Rather there is, I would say, an understanding that we as human beings are in a challenging situation. We make mistakes. We err, and it is then our responsibility to learn from our mistakes and to become better people from our mistakes.