BOB ABERNETHY, anchor: While economic issues have dominated the country and the presidential campaign in recent days, the candidates have also faced some tough questions about US foreign policy. On the campaign trail, both John McCain and Barack Obama have referred to America as a force for good in the world. Do Americans agree?

This week, RELIGION & ETHICS NEWSWEEKLY and the UN Foundation released a new survey about religion and America’s role in the world. We found that the vast majority of Americans believes the US has a moral obligation to be engaged on the global stage in a variety of ways. At the same time, Americans are divided about equally on whether the US has a positive or negative impact on the world. According to our survey, which was conducted by Greenberg Quinlan Rosner Research, nearly 80 percent of Americans agree that sometimes US involvement in world affairs causes more harm than good.

We also found strong support across ideological lines for the idea that America is a nation set apart from others. A majority of Americans — 61 percent — believes that God has uniquely blessed America. A similar number believes that the US should set an example as a Christian nation to the rest of the world. Kim Lawton has the first of our two-part series — today on religion and America’s role in the world.

KIM LAWTON: It’s a beautiful autumn Sunday in York Harbor, Maine, and members of local churches are doing the Crop Walk. It’s a project to raise money for fighting hunger around the world. Tom and Janie Beecher and their three kids, Thomas, Grace and baby Gus, are among the walkers. For the Beechers, combating global poverty is a deeply personal crusade. They adopted Gus, who’s six months old, from Ethiopia in July. 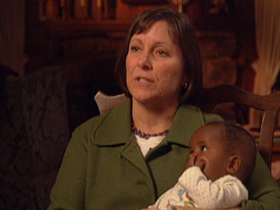 LAWTON: The Beechers are members of St. George’s Episcopal Church in York Harbor, a congregation that has put a strong focus on international issues. They say their global concern comes directly from their faith.

TOM BEECHER (Member, St. George’s Episcopal Church, York Harbor, ME): We really are citizens of the world. That’s what we’ve learned. That’s what we’re trying to teach our children. You know, God’s work doesn’t end at the borders. 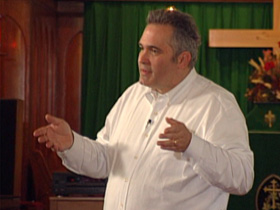 Ms. BEECHER: Whether it’s debt forgiveness or helping with the infrastructure, getting water access — simple, simple things that we take for granted here in the United States that other countries don’t have that we can help with. And we should do it.

LAWTON: At the private level and the national level, there’s a strong connection between religion and views about America’s role in the world. According to our new survey with the UN Foundation, the more often people attend religious services, the more likely they are to believe that the US has a moral obligation to be actively engaged in world affairs.

University of Oklahoma Professor Allen Hertzke is a visiting scholar at the Pew Forum on Religion and Public Life:

Professor ALLEN HERTZKE (Professor of Political Science and Director of Religious Studies, University of Oklahoma and Visiting Scholar, Pew Forum on Religion and Public Life): Americans, I think, are uncomfortable with just naked self-interest. Even though we know self-interest operates in foreign policy, Americans are more comfortable with a moral vocabulary with respect to our foreign policy.

LAWTON: For many, this takes an explicitly religious shape. In our survey, a majority of all Americans — 61 percent — agreed with the idea that God has uniquely blessed America. Fifty-nine percent said the US should set the example to the rest of the world as a Christian nation.

Prof. HERTZKE: In spite of everything that’s happened, the majority of Americans still see America as a place blessed by God with a divine mission in the world.

LAWTON: Hertzke says this is a view that has held sway since the very founding of the country. 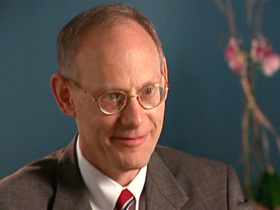 LAWTON: Even those who are uncomfortable with the religious language of America being a Christian nation that is uniquely blessed do agree that the US has a responsibility to be a force for good in the world, and that is frequently tied to their religious beliefs.

Prof. HERTZKE: If you look at issues like humanitarian relief, AIDS funding, support for poverty relief developments, debt relief around the world, many religious Americans see that as an extension of their own charitable impulses from their religious upbringings, and so I think there is a strong support for America’s humanitarian role because of the religious self-consciousness of Americans.

LAWTON: At St. George’s, Rector Paige Blair has made global advocacy a key part of the church’s theological mission.

Reverend PAIGE BLAIR (Rector, St. George’s Episcopal Church, York Harbor, ME): Throughout Scripture, when Jesus is talking about faithful living he speaks more often about economic justice than any other kind of human brokenness. It’s very, very clear where Jesus’ heart is, and where his heart is where we need to have our hearts, and so St. George’s is very committed to serving those in need, near and far, and we really understand our connection to people who are in need all over the world.

LAWTON: St. George’s helped launch an international movement around a special Eucharist service called the U2charist. The liturgy focuses on helping the poor, and all the music comes from the rock group U2. U2’s lead singer Bono here has been a leading international voice linking religion and the effort to alleviate poverty and disease around the world.

Rev. BLAIR: Bono has said that in this globalized world, distance doesn’t decide who our neighbor is, and he’s even reminded us that loving our neighbor is not advice, but a command. So that’s how the U2 connection comes into what we do.

LAWTON: At this U2charist after the Crop Walk, Tom Beecher gave the sermon. He described his family’s experience adopting Gus from Ethiopia.

LAWTON: American private foundations and religious institutions give tens of billions of dollars in international aid. Reverend Blair believes the American government should increase its foreign humanitarian aid, and, she says, the US should fulfill it promises to support a UN initiative to cut global poverty in half by the year 2015. 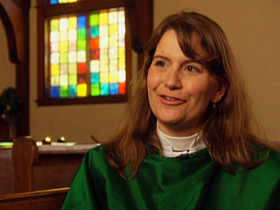 Rev. BLAIR: We are still the wealthiest nation in the world and we still give the least among developed nations on a percentage basis. When you look at the total amount we give, it might look large. As a percentage of our budget it is very, very small. It is still less than 0.2 percent.

LAWTON: Hertzke says many faith groups have an increased awareness of international concerns because of missionary activities, short-term aid projects and special relationships with their co-religionists overseas.

Prof. HERTZKE: I don’t think there is any question that the globalization of faith and the vitality of faith in the United States have combined to produce sensitivity about global issues among Americans. Every major American religious community has ties abroad.

LAWTON: Strong majorities of Americans believe the US has a responsibility to promote human rights and intervene, even militarily, to stop genocide or ethnic cleansing in another nation. People across faith lines have been leading advocacy campaigns on behalf of Sudan’s Darfur province. 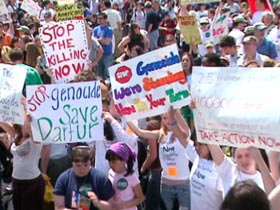 ELIE WIESEL (at rally): We are here because in Darfur families are being uprooted, starved, children tormented and slaughtered in the thousands, and in the eyes of the victims the world remains indifferent to their plight.

LAWTON: But despite Americans’ humanitarian impulses, the fight against terrorism still dominates foreign policy priorities, and here there is less consensus. Overall, Americans are equally split on whether the US has a positive or negative impact on the world. An overwhelming majority, nearly 80 percent, do say that sometimes US involvement causes more harm than good.

Prof. HERTZKE: How that can be reconciled with the view that America has a divine mission and generally is a force for good is a recognition that sometimes we get it wrong, that even while we have good intentions we make mistakes. While Americans still support a major American role in the world, they want us to be smart about it.

LAWTON: Orlando Bishop Thomas Wenski chairs the U.S. Catholic Bishops Committee on International Justice and Peace. He’s part of a broad-based interfaith effort to ban US use of torture. He says tolerating torture is against American values. 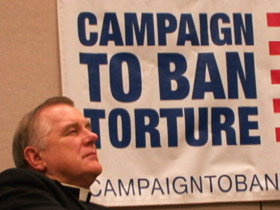 Bishop THOMAS WENSKI (Diocese of Orlando and Chair, U.S. Catholic Bishops Committee on International Justice and Peace): There’s about 150 countries that do torture prisoners or captives, but we should stand above them because we as a nation stand for an idea of human dignity and of human freedom.

LAWTON: The current economic crisis presents another complicating factor for American involvement around the world.

Prof. HERTZKE: It will be a challenge for the next president to make a case for American dollars going abroad when we have such an economic crisis at home. So I think in that sense it’s going to clip our wings a little bit with respect to the kind of role we play in the world.

LAWTON: At St. George’s, Tom Beecher is urging his fellow church members to hold their politicians accountable to ensure that the world’s poor are not burdened even more.

Mr. BEECHER: These are scary times, and I pray that we don’t step back from our responsibilities there, that we don’t let the crisis we’re living through now take our focus away from the work we need to do across the world. 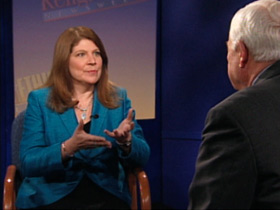 LAWTON: He and millions of other Americans say that’s a moral obligation which cannot be ignored.

ABERNETHY: Kim, on that finding in the poll that many, many Americans think we have a divine mission in the world but at the same time think we sometimes do more harm than good. How do you interpret that?

LAWTON: Well, it was a very interesting finding, this idealism versus this realism about our ultimate impact. About 49 percent of the people we surveyed said the US has a negative impact in the world, and — but with the half that said well, we have a positive impact in the world, they do concede that sometimes the US causes more harm than good. We didn’t specify what that “sometimes” circumstances might be. Our survey also found dissatisfaction with the Iraq war, you know, I’m sure Afghanistan, the war on terror all played into that — that sometimes we don’t live up to our ideals.

ABERNETHY: And the priorities we have, what are they?

LAWTON: Americans have a strong impulse for humanitarian efforts. They see this humanitarian role for the US, but the number one priority was fighting terrorism. In our survey people said securing the nation was the top priority internationally.

ABERNETHY: And on that humanitarian topic, so many congregations have an individual, direct, personal connection to people in another part of the world.

LAWTON: Well, we found that the more often people attend religious services across the board, the more likely they were to believe that the US has a moral obligation to be engaged in the world, and I think these connections, these sister congregations, these short-term aid projects, and all of that really personalize the problems in the world and give people a sense of urgency about some of these issues.

ABERNETHY: Kim Lawton, many thanks. Next week, Kim will have the second part of our series, a report on young evangelicals and their views about politics and the world.

Survey: Religion and America’s Role in the World