BOB ABERNETHY, anchor: We have a Lucky Severson story today that is both disturbing and inspiring, about a born-again preacher, José Antonio Galván, in Juárez, Mexico who takes care of the poorest of the poor – unwanted, drug-addicted, mentally ill street people with no place to live but “El Pastor”‘s shelter, out in the desert just south of the US border.

LUCKY SEVERSON: Driving by on the highway, it’s hard to say what kind of building this is or what’s inside. The sign says it’s a shelter for the mentally handicapped. They live here out in the desert near Juárez, Mexico, because they’ve gone crazy and been rejected by society. There’s no government agency to take care of them and their families are either too poor or they don’t want them. 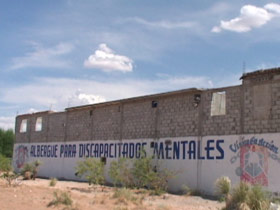 This place, this shelter was built with the help of private donations by this man, a born-again street preacher named José Antonio Galván.

JOSÉ ANTONIO GALVÁN (“El Pastor”): I’ve got 110 patients, my “childs,” that are my childs, not my patients, my childs, and this is a mental institution, especially for the person of the streets. For the people who they lay down on the streets like trash, nobody wants them except Jesus Christ and your server, his servant.

SEVERSON: He says some of the more dangerous people in Juárez are residing in his institution that many are delivered here by the local police. El Pastor, as he is called, says 90 percent of his population started their journey to madness on cheap drugs.

Pastor GALVÁN: Why do they do that? Because they are hungry. These are very poor people. They don’t have nothing to eat. What they looking for? To kill the hunger, they go to the drugs.

SEVERSON: El Pastor says the drugs the poor find on the streets in Juárez are especially dangerous, often diluted with toxic mixtures, including rat poison. Among the poor, inhalants are a cheap and easy fix, but very destructive. 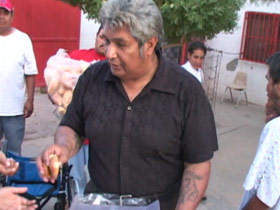 Pastor GALVÁN: And you can inhale them all day long, and then they’re killing a lot of neurons on the brain. Now Hugo, he was doing so many drugs, everything — thinner, cocaine, heroin — and finally he blew his mind.

SEVERSON: His “institution” is located about 15 miles south of the US border, and he says a number of his patients are American citizens who have been deported for drug abuse or other crimes.

Pastor GALVÁN: (speaking about Crystal, a patient): She makes so much drugs. She was deported from California. She got a problem. She’s broken. They bring her from the hospital, too.

SEVERSON: This woman threw herself in front of a train and lost all but one limb after her youngest child died. She may or may not still be disturbed, but she has nowhere else to go.

Pastor GALVÁN: She’s OK with us, and very clean and so cute.

SEVERSON: Some here are so dangerous to themselves and others he keeps them in solitary confinement. The man he’s coaxing out of his hole is a sexual predator. 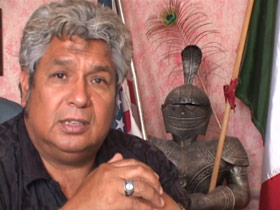 SEVERSON: He says he knows how it must look, especially to Americans, to have mental patients in jail and women behind bars.

Pastor GALV&AactueN: It’s for their own safety, because you never know. When we run out of the medicine, you can’t control them. You can’t.

SEVERSON: El Pastor says the woman making all the noise is in crisis and is quite capable of killing someone. Invoking the name of Jesus is the only medicine he has on hand to calm her.

Pastor GALVÁN: I’m praying for her. You see how she calms down? We got the power of the Lamb. I know that. I know it. But sometime we need some medication.

SEVERSON: El Pastor says there was a time about 15 years ago, when he was one of the wasted souls littering the downtown plaza in Juárez. That was where he ended up after he sneaked into the US, made a lot of money as a crane operator, and then blew his earnings on drugs and women. He eventually landed back in Juárez, where he was approached by a street preacher much like himself. He says it was after he attacked the preacher and saw the blood on his own hands that he surrendered his life to God. 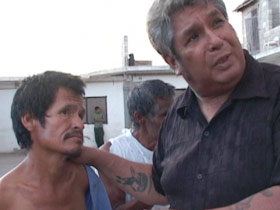 Pastor GALVÁN: But the Lord started, you know, healing my mind. I’m born again, and that’s why I’m doing this.

SEVERSON: At first he started sheltering drug addicts, then one night he drove by a homeless person obviously deranged.

SEVERSON: El Pastor has a green card and travels to the US frequently to raise the money to keep his place going. He’s received help from companies like Tyson’s Chicken as well as the Mormon Church. Local businesses also contribute. Government sponsored mental health care in Mexico is often nonexistent. In Juárez there’s a county facility that cares for 32 people, but for only three months at a time. After that they’re on the street, some lucky enough to end up here. 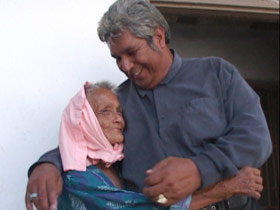 A doctor comes by once or twice a month, but the medicine often runs out before he returns. Some patients do improve enough to help El Pastor operate the place. They become part of his staff.

SEVERSON: People like Becky, shown here outside the compound at dusk, singing praises to the Lord. Years ago, Becky killed an old lady over a cigarette. Now she’s become one of El Pastor’s most trusted helpers.

Pastor GALVÁN: She says she was so ill she was crazy but now, not anymore. No más, eh?

The best thing is love. I can see the people when a little hug, a smile, a little touch, and they feel somebody love them. That is better than the medicine. The medicine is good, but that’s just another medicine, the love of Jesus.

Everybody needs love. Like the Beatles say, “All we need is love, doo, doo ta doo, ta doo.” And they feel it. They can feel it when you touch it. They know it. You’re not lying to them. They know it. Somebody loves them.

SEVERSON: That somebody says he has a dream to build a beautiful place for his guests, one where they can live the rest of their lives in loving care, with dignity.

Heroin and the Faith Community