BOB ABERNETHY, anchor: The inauguration takes place the day after the nation honors Reverend Martin Luther King Jr., and religious leaders are among those who see ties between Obama’s election and King’s vision for America. Kim Lawton has a special report.

KIM LAWTON: As they prepared for inaugural festivities, President-elect Barack Obama and his family visited the Lincoln Memorial this week, evoking more memories of Reverend Martin Luther King Jr.’s famous “I Have a Dream” speech. 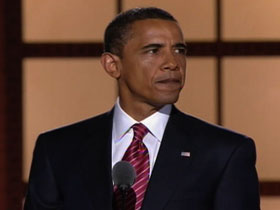 LAWTON: It was on the 45th anniversary of that speech that Obama accepted the Democratic nomination for president. He noted that, given the situation in 1963, the crowd could have expected to hear King speak in anger, with the frustration of dreams deferred.

BARACK OBAMA (in speech): But what the people heard instead, people of every creed and color, from every walk of life, is that in America our destiny is inextricably linked, that together our dreams can be one.

LAWTON: In this historic week, connections between Obama and King are inevitable. Many Americans across racial and religious lines see Obama’s inauguration as one key fulfillment of King’s dream.

Reverend DONNA JONES (Senior Pastor, Cookman United Methodist Church): For this bi-racial guy with an immigrant father, with roots in community organizing, with an African American wife and two black kids to move into the White House — what kind of country we have today that that can happen is such a testament of hope and a testament to the sacrifice of Martin Luther King.

LAWTON: Philadelphia United Methodist pastor Donna Jones says Obama’s election has ignited a new sense of optimism in her community and in communities across the country.

Rev. JONES: What this campaign has done in its entirety, and this is beyond Barack Obama, is it let us know that the process can work to effect change, but it didn’t necessarily change anything.

LAWTON: And, indeed, amid all the talk of hope, some religious leaders are also cautioning that much work still needs to be done before King’s full social vision may be realized.

Professor HAROLD DEAN TRULEAR (Howard University Divinity School and President, GLOBE Community Ministries): We don't want to come to the conclusion that because Obama is now the president we're going to have this sort of panacea-existence both in the United States and with respect to our position in the world.

LAWTON: Dreams aren’t always easy in this North Philadelphia neighborhood, where Jones is senior pastor at Cookman United Methodist Church. It’s an area plagued by drugs, prostitution, and economic distress. Cookman has developed a host of social programs to try to deal with the problems. The church has a special focus on at-risk youth. They run an after-school program and teen lounge where kids can hang out, take refuge from the streets, and get counseling and homework help, and Cookman also has a school for chronically truant youth that uses a home-school curriculum. The students meet at the church every day for classes. 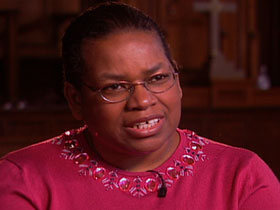 Rev. JONES: I believe that Jesus was involved in social service. He went around healing. He healed a lot of people. He healed before he went out with the gospel message. So it’s an expression of Christ’s love, and whether people even accept Jesus Christ or not, his love should be offered.

LAWTON: She also believes the programs fit into Martin Luther King’s vision of what he called “the beloved community,” a term he learned from earlier theologians. It’s an inclusive vision of brotherhood and sisterhood, where all people share in the wealth of the nation, and justice and peace prevail. A place, Jones says, where all God’s children have enough, and nobody has too little.

Rev. JONES: That’s the legacy of King, first putting out the reality of the beloved community, again, all of that’s very biblical, but also putting out the hope and the encouragement to say you know what, you can do something to help create that, whatever the something is.

LAWTON: Students at Cookman got excited about Obama’s campaign, and several were part of a get-out-the vote project. His election means a lot to them. 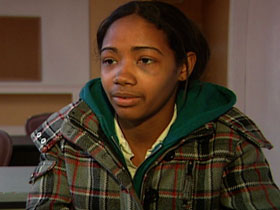 ZULEIKA SILVERA (Student): I ain’t going to lie, I didn’t think he was going to win. But I’m like, wow, we really did it. It really felt like we made a change, like we got people to go out there and vote, and I’m, like, we made a change. We really did.

KHAREEM COLEY: You could do anything if you put your mind to it. That’s what that message really gave me.

Prof. TRULEAR: They have the sense that they too can become president. I mean, part of the thing with Obama is that it's not just that he's an African American, but he's also common. He cut his teeth, even as a Harvard-trained lawyer he cut his teeth working in neighborhoods like this in the South Side of Chicago.

LAWTON: Howard University theology professor Harold Dean Trulear is president of GLOBE Community Ministries, a faith-based group that offers support to youth programs, including those at Cookman. He says Obama’s election will have a profound impact on coming generations.

Prof. TRULEAR: My daughter sends me a text message next morning, it says, “Dad, I have a black president.” That won't be an unusual thing for her. Those kinds of things, I think, give my generation a lot of hope, and the only nagging thing is we just don't want to lose sight of where we've come from.

LAWTON: It’s easy to forget, he says, that King’s vision was about more than race. 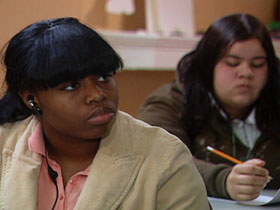 LAWTON: Just as King led his grassroots movement from churches, Trulear says congregations of today still have the responsibility to lobby for broad social change no matter who is president.

Prof. TRULEAR: A lot of our religion, whether it's the television prosperity gospel or whether it's what you hear in a regular mainline church, has more to do with affirming who we are than challenging us at our root. I think we've lost sight of the prophetic dimension of the faith tradition.

BARACK OBAMA : What we have already achieved gives us hope — the audacity to hope — for what we can and must achieve tomorrow.

Rev. JONES: For our generation, I believe it was a sense of confirmation that this stuff of democratic renewal and public policy advocacy and community organizing really does work.  And I think that we needed to see that, because we were getting really cynical.

LAWTON: She says many faith-based activists had begun to feel like the children of Israel, wandering in the wilderness in the 40 years since King’s death. Obama’s election changed that.

Rev. JONES: I would have said “not my lifetime.” Now I don’t have anything that I will say “not in my lifetime.” So that means beloved community could happen in my lifetime. For King to hear that in heaven he’s probably, like, “All right. They’re coming out of the wilderness.”

BARACK OBAMA:  The road ahead will be long. Our climb will be steep. We may not get there in one year or even one term, but America, I have never been more hopeful than I am tonight that we will get there. I promise you, we as a people will get there. 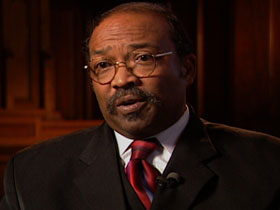 LAWTON: Ultimately, Trulear believes, there is a spiritual message that Martin Luther King preached as well — the true meaning of hope.

Prof. TRULEAR: We say I hope it doesn't rain. I hope the Eagles win the football game. I hope I hit the lottery. It's more like a wish that's not grounded in any kind of reality — it may happen, it may not, I have no control over it. In the biblical sense of the term, hope is a very, very fixed reality. It means that I have an expectation that something is going to be different than the way it is now.

LAWTON: Obama’s election, he says, has tapped into that deep place of hope.

Connections between Barack Obama and Martin Luther King Jr. are inevitable. Some see the presidential inauguration as a testament to the sacrifice of Reverend King and a as powerful expression of hope.