BOB ABERNETHY: Should a Catholic university honor a president whose views on abortion differ from the teachings of the Catholic Church? All week, outside the Notre Dame campus, protesters condemned the university’s invitation to President Obama to give its commencement address this weekend (May 17) and receive an honorary degree. Earlier, in Washington, at last week’s National Catholic Prayer breakfast (May 8), former Archbishop of St. Louis Raymond Burke, a strong abortion opponent and now a Vatican official, sharply criticized Notre Dame. 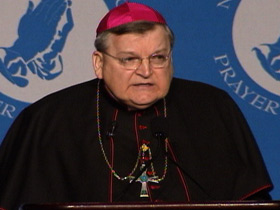 Archbishop RAYMOND BURKE (Former Archbishop of St. Louis, at National Catholic Prayer Breakfast): The proposed granting of an honorary doctorate at Notre Dame University to our president, who has been so aggressively advancing an anti-life and anti-family agenda, is rightly the source of the greatest scandal.

ABERNETHY: While Archbishop Burke received a standing ovation, many other Catholics noted that Notre Dame has been inviting presidents to its campus since the days of Dwight Eisenhower. Father Thomas Reese of Georgetown University says that’s part of academic freedom.

Father THOMAS REESE (Senior Fellow, Woodstock Theological Center, Georgetown University): I don’t think it’s a scandal. Universities should be places where we have discussion, debate, where people of different views come together to argue, and when the bishops get involved in trying to censure people, ban speakers — I think it’s not helpful.

Archbishop BURKE: This is a Catholic institution which is bound by — its title is Catholic, its identity is Catholic — to uphold the moral law, and that’s the source of the scandal.

Fr. REESE: You can’t be afraid to discuss these issues, to debate these issues. If you ban people from your campus, if you censor people, it comes across as an acknowledgment that you really don’t have good arguments that are convincing to either your students or that can win in a debate over these issues. 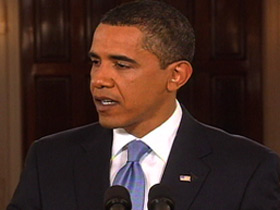 President BARACK OBAMA: I believe that women should have the right to choose. But I think that the most important thing we can do to tamp down some of the anger surrounding this issue is to focus on those areas that we could agree on.

ABERNETHY: Back at Notre Dame, Professor Scott Appleby saw a bright side.

Dr. SCOTT APPLEBY (History Professor, University of Notre Dame): If one result of the president coming to commencement is that there’s a vigorous public debate and discussion about the issues, well, that’s a victory really for a university.

ABERNETHY: Many of the protesters at Notre Dame were well known anti-abortion activists from around the country, but their views do not represent the opinions of most Catholics. According to a Pew Research Center survey, 50 percent of American Catholics approve of Notre Dame’s invitation; 28 percent do not.

Is it appropriate for a Catholic university to honor a president whose views on abortion differ from the teachings of the Catholic Church?

Interview with Pope Francis: Catholic Church Should Be a “Home for All”

How Has Election 2012 Influenced Religious and Political Issues?