BOB ABERNETHY, anchor: This week (May 14) in Wausau, Wisconsin, jury selection began in the trial of a mother charged with reckless homicide. She relied only on God, not a doctor, to heal her sick daughter. The girl died. The mother was a member of a sect that teaches reliance on faith and prayer alone to heal. She was not a Christian Scientist, which does not forbid medical treatment. Christian Scientists are also active in trying to create legislation that balances the state’s duty to protect children with parents’ trust in God. But should there be any exemptions from prosecution because of religious faith? Lucky Severson reports. 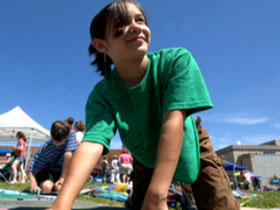 LUCKY SEVERSON: The 911 call was from Kara Neumann’s mom, by Kara’s bedside at home in Wisconsin.

911 OPERATOR: Just feel by her nose and see if she’s breathing.

SEVERSON: It was too late to save the 11-year-old girl suffering from juvenile diabetes. Dr. Norman Fost, a pediatrician and ethicist at the University of Wisconsin, says her death could have been prevented.

Dr. NORMAN FOST (Pediatrician and Ethicist, University of Wisconsin): Millions of Americans have diabetes, and most children with diabetes are living reasonably normal lives. There are complications later in life, so that life expectancy may be curtailed. But Kara Neumann had many, many decades of happy life ahead of her.

SEVERSON: Dr. Fost says he has seen many kids, like Kara, often suffer and die needlessly because their parents refused to take them to a doctor and instead put their faith in the healing power of prayer. The Neumanns reportedly subscribed to the teachings of Unleavened Bread Ministries, an online religion.

University of Wisconsin religion professor Shawn Peters says there are a surprising number of religious groups that preach faith healing based on a literal interpretation of the Bible and a fervent belief in the power of a loving God. Peters authored a book called “When Prayer Fails.” 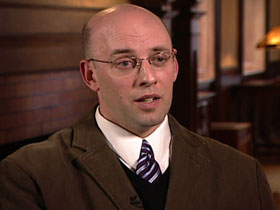 Dr. SHAWN PETERS (Professor of Religion, University of Wisconsin and Author, “When Prayer Fails.”): They look to passages from books of the Bible such as the Epistle of James. The fifth chapter of James has this passage that begins, “Are any among you sick?” and then it seems to spell out treatment — and it’s treatment that doesn’t include secular medicine. It’s treatment that includes prayer and anointment with oil.

SEVERSON: In a small, private graveyard in a Portland, Oregon suburb there are at least 75 tombstones of children whose parents belonged to a small church called the Followers of Christ that relied on faith healing in lieu of medical treatment. Russ Briggs left the church after he buried two baby sons in this cemetery.

RUSS BRIGGS: There’s something about holding your child in your arms while it dies. It’s — it’s just — it’s terrible.

SEVERSON: Professor Peters says the cases we hear about are only the tip of the iceberg.

Dr. PETERS: It’s sort of a hidden tragedy in communities that are not part of mainstream America. We just don’t know what’s happening to the kids in those church communities.

SEVERSON: Until 1999, parents of kids buried here were not prosecuted because Oregon law had a religious faith-healing exemption. Oregon closed the exception, but more than 30 states, including Wisconsin, still allow them. But that didn’t stop the district attorney in Wisconsin from charging Kara Neumann’s parents with reckless homicide, and that’s when Joe Farkas with the Christian Science church stepped in. The church helped write the first law, which after the Neumann arrest was viewed as protecting reckless parents. Now the church is proposing new legislation which Farkas says will give children more protection.

JOE FARKAS (Christian Science Church): We never intended it to be in any way perceived as a shield for reckless behavior. So as people very much involved in that law we always had wanted to protect children, and we felt we had to step in with a solution.

SEVERSON: Christian Science may be the largest and best known of all the faith-healing traditions. The church has full-time paid practitioners who pray for the sick. Joe Farkas is one of them. He says healing represents a fundamental connection Christian Scientists have with God. 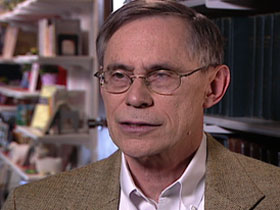 Mr. FARKAS: We expect a good outcome because we’re praying to an all-good God. We don’t believe that suffering is ever the will of God or that someone should die because it’s God’s will. We see that the outcome from successful prayer is always good.

SEVERSON: Farkas says the legislation the church proposes is designed first to protect kids, but it also outlines a number of factors for a jury to consider, including the length of the illness. But Dr. Fost says the proposed changes only serve to protect the parents.

Dr. FOST: So if a child has been ill for a long time, then the prosecutor should say, “Well, let’s see. He/she was ill for a long time. Maybe that gave the parents reason to think that this wasn’t very serious, because she hadn’t died yet.” The point is that there should be no criteria — no special criteria — based on religious beliefs.

SEVERSON: The bottom line, according to Rita Swan, is that the proposed law would actually make it more difficult to prosecute faith healers. Swan is the founder of Children’s Healthcare Is a Legal Duty.

RITA SWAN (Founder, Children’s Healthcare Is a Legal Duty): There is one condition about the child’s age. Well, what does that mean? Does it mean that parents have no legal duty to get medical care for a teenager? The conditions are vague. They’re contradictory. They’re confusing to the jury. There’s no state in the country that has a law like this.

Mr. FARKAS: Our church does not have any strictures against seeking medical treatment, and it also does not shun any of the members that do seek medical attention. 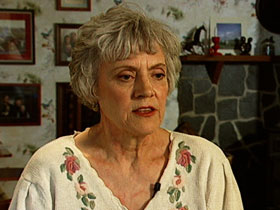 Mrs. SWAN: I’m not saying that the officials come and threaten you with a gun or with some terrible punishment, but the theology itself says that Christian Science is the only method that really heals disease.

SEVERSON: But Rita’s sixteen-month-old son Matthew died. Matthew had meningitis that was not diagnosed until it was too late and, she says, not until her Christian Scientist practitioner finally told her to go see a doctor under the pretense that Matthew might have a broken bone. Rita and her husband ended up leaving the church, disillusioned about its teachings—the same teaching that continue to inspire Joe Farkas.

SEVERSON: Farkas says he has witnessed his own wife’s dramatic healing.

Mr. FARKAS: The doctor she went back to recommended that she have her uterus removed now. We didn’t have any kids at the time and that was quite a blow to hear that we couldn’t have kids. One night when my wife was praying, a sense of divine love was felt by her and some words came to her consciousness. When she woke up in the morning, she was completely healed.

SEVERSON: Farkas says Christian Scientists love their kids and would never be reckless with their health, but the church is opposed to another law the Wisconsin legislature will also be voting on this session that removes all religious faith-healing exemptions — a law that Rita Swan supports.

Mrs. SWAN: I know in many cases parents are relieved. It takes the moral burden of decision-making off of the parents’ shoulders. They no longer have broken a law of the church.

SEVERSON: Dr. Fost says he would never discourage spiritual healing — that prayer plus medical care is probably better than either one alone. But the law, he says, needs to be there to protect helpless kids. 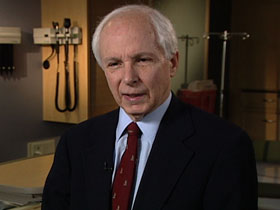 Dr. FOST: I don’t think the point is to punish the Neumanns, and I’m not in favor of sending them to jail if they are prosecuted. But I think criminal prosecution is a way of the state saying that we will — we care about our children. We’ll protect them.

Prof. PETERS: There is no criminal intent. I mean, in all of the hundreds of these cases that I have looked at, part of what makes them so tragic is that the parents are doing what they think is best for their children. The punishment that they care about would be the punishment in the hereafter. That is what is significant.

SEVERSON: If convicted the Neumanns could go to jail for 25 years, but faith-healing parents are seldom put behind bars.

Some parents rely only on God, not a doctor, to heal their children. As a result, many pass away because they are not diagnosed and do not receive proper treatment. Should there be any exemptions from prosecution because of religious faith?

ETHICAL DILEMMAS IN PEDIATRICS by Dr. Lorry Frankel WHEN PRAYER FAILS: FAITH HEALING, CHILDREN, AND THE LAW by Shawn Peters