KIM LAWTON:  From the moment he arrived in Israel, Pope Benedict XVI made peace his central theme. Benedict said over and over again that this was a spiritual pilgrimage, not a political mission. Yet he couldn’t avoid the complicated politics of this land. The pope expressed his support for a two-state solution for Palestinians and Israelis — something Israel’s new government has yet to commit to. Many Palestinians were especially pleased the pope visited the Aida refugee camp near Bethlehem. There he criticized the huge concrete security wall built, the Israelis say, to keep out suicide bombers, and while he endorsed the creation of an independent Palestinian state, he also urged Palestinian youth not to resort to acts of terrorism. 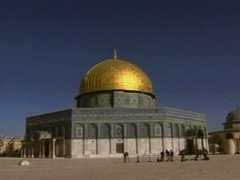 Rabbi RON KRONISH (Interreligious Coordinating Council in Israel): Every step that the pope takes in every place he goes, including the Temple Mount or the Western Wall, is a gesture of reconciliation to both sides, and he’s tried during the week he’s here to play a balancing act, and it never quite works out perfect for everybody.

LAWTON: Pilgrims came from around the world to be part of the pope’s visit here, but his main focus was on the local Christians, Jews, and Muslims. The visit certainly encouraged the region’s shrinking Christian population. In 1948, Christians made up about 20 percent of the population here. Today, because of emigration and declining birth rates, they represent less than two percent.

Reverend IBRAHIM FALTAS (Latin Parish of Jerusalem): We are worried about the Christians here in Jerusalem and all the Holy Land. To be here is our mission, to be here, to continue to be here in this land.

HANAN NASRALLAH: He is the big man, the holy — well, you consider the holy man and representing the Catholic Church over the world, so for him to come in an area where there is a conflict — a very small country, but it’s a big issue here, I think it’s very important for his visit.

KHALIL ANSARA: The talk is always about the relationship with the Muslims and the Jews, but it’s very important for the pope to come here too with the relations with the Christians.

LAWTON: Meanwhile, many Jewish leaders had high expectations that this visit would be a visual demonstration that their community still has strong relations with the Vatican, despite recent tensions after Benedict lifted the excommunication of a traditionalist bishop who denies the Holocaust.

LAWTON: Benedict met with Israel’s chief rabbis and visited the Western Wall, where he left a prayer for peace in the Middle East. He also visited Yad Vashem, the Holocaust memorial. But his speech there generated controversy. Some Israelis were upset that he did not acknowledge the role Christian anti-Semitism played in the Holocaust, and he did not refer to his own background as a German growing up in the Nazi era. 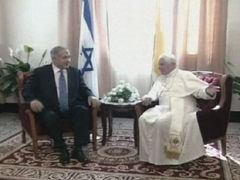 Vatican spokesman Father Federico Lombardi said the pope had addressed those points before and didn’t feel the need to repeat them.

Reverend FEDERICO LOMBARDI (Vatican Spokesman): He had already spoken many times about these problems.

LAWTON: Rabbi Ron Kronish of the Interreligious Coordinating Council of Israel said he believes, overall, the visit was a positive thing for the Jewish community.

Rabbi KRONISH: It strengthens Israel’s place in the family of nations and in the world community. So I think that people are going to be happy about it when they look back. He went to Yad Vashem; he went to the Western Wall; he went to all the right places. He’s made all the right gestures that count for both peoples, and I think we ought to not focus on all the things he could have said or not said.

LAWTON: Benedict also did some fence-mending with the Muslim community, where tensions linger after his controversial speech in 2006 where he quoted a Byzantine emperor who linked the Prophet Muhammad and violence. Benedict was the first pope to visit the compound of Al Aqsa Mosque and the Dome of the Rock, one of the holiest sites in Islam and a place of deep contention between Muslims and Jews.

ISSA JABER (Association for Jewish-Arab Coexistence in the Judean Hills): We believe that His Holiness’ visit to the Mosque of Al Aqsa and the Dome Rock was very important and may open new dimensions of dialogue — a new dialogue between the different religions, especially Islam and Christianity.

LAWTON: But the complexities of interreligious dialogue here were also evident. At an interfaith gathering, Sheikh Taysir al-Tamimi, an Islamic court judge in the Palestinian Authority, made an impromptu 10-minute-long diatribe against Israeli occupation, prompting some of the Jewish representatives to walk out of the meeting.

Mr. JABER: Maybe it was not exactly on the agenda of the program, but for Sheik Tamimi it was very important to show the pope and to let him understand the painful — the pains of the Palestinian people in Jerusalem and outside of Jerusalem.

ELANA ROZENMAN (Trust-Emun Group): It demonstrated our reality here, and if things were simple and the religions could easily get together and meet together without any problems we would already have peace.

LAWTON: Elana Rozenman is part of an interfaith movement called the Abrahamic Renunion, which seeks to build personal relationships and trust among people of the three major religions. 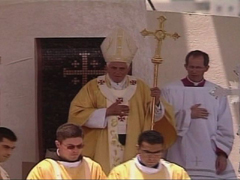 Ms. ROZENMAN: Yes, the reality of conflict and war and killing exists daily. Right now people are being victims of violent acts here. We know that, but also there is another level of reality that exists of peaceful, harmonious, loving relationships between Muslims, Christians, and Jews.

LAWTON: She works closely with her friends, Eliyahu McLean, a fellow Jew, and Ibrahim Ahmad Abu El-Hawa, a Muslim.

IBRAHIM AMAD ABU EL-WAWA: We are stubborn people. We are the children of Abraham. We are from the same seed. Okay?

ELIYAHU MCLEAN (Jerusalem Peacemakers): This is a point that Ibrahaim always makes, that God chose two of the most stubborn people in the world, the Arabs and the Jews, to live in this land, and it is actually God’s decision, and this is why it’s also so difficult to make peace, because we’re both very stubborn. But at the same time we need to be stubborn to be peacemakers.

LAWTON: The three say the pope’s visit encouraged them in their work.

Mr. MCLEAN: I really felt personally empowered when the pope gave a specific blessing to the peacemakers, to the Jews and Arabs, Israelis and the Palestinians who are working to make a better future for the children of Abraham in the land of the prophets, in the Holy Land.

LAWTON: The pope may have urged the religious community to be a force for peace, but many leaders in the movement for interfaith dialogue acknowledge that politics can’t be separated out.

Rabbi KRONISH: The road ahead is bumpy. It’s not a smooth road, because we are linked to the political processes. We try to keep a flicker of hope alive in a sometimes desperate situation, and we believe that when the peace process moves forward, we will be able to move, in cooperation with governments, in bigger and more systematic ways in the future.

LAWTON: Benedict prayed for peace at every stop in this week-long Holy Land pilgrimage, and in spite of everything else, Christians, Muslims, and Jews alike said they hope that message of peace is the ultimate legacy of this trip.