MARY ALICE WILLIAMS, guest anchor: California’s gay marriage law remains in legal limbo. The state’s Supreme Court judges have less than two weeks to either uphold or strike down the gay marriage ban known as Proposition 8. Prop 8 passed last Election Day, in large part because Mormon churches mobilized for it. The Church of Jesus Christ of Latter-day Saints withstood blistering criticism from outside the faith. Now resentments are festering inside the Mormon community. Lucky Severson reports.

LUCKY SEVERSON: Dr. Pam Chan is an OB/GYN and a lifelong Mormon living in San Francisco. She found herself deeply conflicted when she got the message that her church was going all out in support of Proposition 8 banning gay marriage in California. 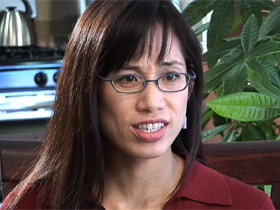 SEVERSON: Ron Packard is a lawyer, a former Mormon bishop and former mayor of Los Altos, California. He is now a councilman who supported Proposition 8 and says it’s extremely rare for the church to get involved in ballot issues.

RON PACKARD (Former Mormon Bishop): I think that they made an exception to their general policy of not getting involved because they have a core concern about the protection of families and the possible disintegration of families in modern society.

SEVERSON: The church’s official position is that marriage between a man and a woman is ordained by God, and the formation of families is central to the Creator’s plan for his children. Mormons believe they are led by a modern-day prophet who receives revelations from God, and when the prophet speaks members usually follow. But with this issue Dr. Chan discovered that other active members of the Church of Jesus Christ of Latter-day Saints were also strongly opposed to the church’s position on gay marriage.

Dr. CHAN: Our church is the church of Jesus Christ, first and foremost, and my understanding of the Gospel of Christ is that it’s a Gospel of love and acceptance. So it seems like a policy that’s about discrimination, which often goes hand in hand with fear and hatred, not about love and acceptance, and that for me is really troublesome.

SEVERSON: Bob Rees is a retired professor of literature at UCLA, a former Mormon bishop and a church scholar.

BOB REES (Former Mormon Bishop): In reality, this is an issue which has divided our society. It’s divided churches. It’s divided families, and some individuals are divided within themselves.

LISA FAHEY (Member, Church of Jesus Christ of Latter-day Saints): So during the rallies I had some signs that said “Straight and Active Mormon for Marriage Equality” because I wanted to let people know, and I got a lot of attention for that. People came up and shook my hand and hugged me and told me, “Thank you very much.”

Ms. FAHEY: That’s my whole point for speaking out — letting other people know that you can vote “no” or you can be for gay marriage and still be an active Mormon. 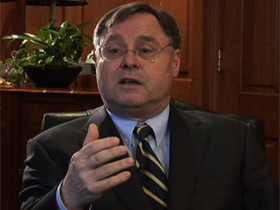 Mr. PACKARD: The church has a long tradition of encouraging thinking members to not be afraid to speak up — beginning with Brigham Young. He said doesn’t want blind allegiance. He wants people to pray about it, think about it, and come to their own conclusions.

SEVERSON: In the year 2000, a majority of California voters approved a proposition stating that only a marriage between a man and a woman was valid. Eight years later, the California Supreme Court ruled that the ban on gay marriage violated the state’s constitution, and that’s when the drive began to amend the constitution with Proposition 8, and that’s when church leaders sent out a letter to its members calling on them to donate their time and money to an unequivocal moral cause. Although many churches and a majority of Californian’s supported Proposition 8, Mormons were probably the most organized and donated almost half the $19 million generated for the campaign.

SEVERSON: The church may also have been unprepared for the number of members who opposed the church’s proclamation. Members who are still active like Laura Compton, a church organist and mother of two, who operates a Web site called Mormonsformarriage.com. She says the site still gets lots of attention and in the run-up to Proposition 8 was getting thousands of hits a day.

LAURA COMPTON (Mormonsformarriage.com): The comments that we have gotten are a lot of members who say, “Thank you so much for creating this community. I felt so alone.” A lot who said, “Because you have this site, I’m able to continue going to church.” A lot of people who have called us to repentance for what we have been doing, and a lot of outside people who’ve said, “Thank you for showing us that not all Mormons, you know, want to take away our rights to marriage.”

Ms. FAHEY: It’s been really difficult to be a member of the church during this time. I’ve had a lot of people tell me that possibly I should be excommunicated, and that’s really hurt me, because I feel like I’m really a very loving, forgiving person. 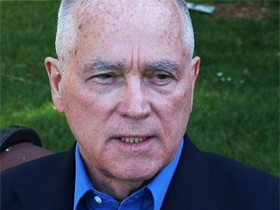 Mr. REES: The most unfortunate thing for me in all of this thing that happened over Proposition 8 was the divisiveness, the acrimony. Each side began in some sense emotionally and spiritually dis-fellowshipping or excommunicating the other side.

SEVERSON: Ron Packard says the most fierce opposition has come from gay rights advocates that have rallied against the church around the nation. He’s says he on a blacklist because he supported Proposition 8.

Mr. PACKARD: There’s some people who’ve lost their jobs because they supported Proposition 8.

KIM MCCALL (Member, Church of Jesus Christ of Latter-day Saints): So one of the dynamics of the church over the last hundred years is to move more and more mainstream. Okay, we looked very sort of un-American. You know, Brigham Young was opposed to the Pledge of Allegiance [Editor's Note: Mr. McCall's statement about Brigham Young is in error. Brigham Young died in 1877. The Pledge of Allegiance was written in 1892], and we looked really outside the mainstream, and there’s been a, you know, more American than thou now we’re the most patriotic people. Okay, we weren’t very monogamous. Now we’re more monogamous than everybody else. You know, we’ve got to be. You know, we’re so worried about polygamy in our history and how odd it makes us look that maybe we need to overreact.

Mr. REES: I think there is little question that a from a public relations point of view the church has suffered over its involvement in Proposition 8, and I know of people who have had second thoughts about joining the church over this issue. I know some of our missionaries have had a difficult time finding open doors and open hearts because of this.

Mr. PACKARD: A majority of the people of the United States don’t want same-sex marriages. So for the majority we may have, instead of getting a hit we get a halo. Whenever any organization gets involved in the political process, there’s going to be some who consider it a hit and others who feel that they’re a hero.

SEVERSON: Ron Packard says the church does not discriminate against gays, that his niece and some of his friends are gay, and that the church does not have a policy of denying the sacrament to homosexual members. But Lisa Fahey says there are still members who don’t understand what it means to be gay. 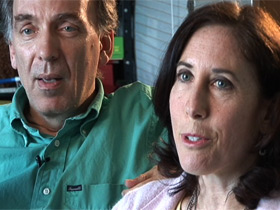 Ms. FAHEY: I even had some friends say that they still think that homosexuality is a choice. I don’t think the church leadership feels that way but members — some members feel that way, wrongly of course.

SEVERSON: Bob Rees says as a bishop he counseled gay and lesbian members who felt they were not wanted in the church.

Mr. REES: We have congregations who are not inclusive of the homosexual members of their congregations. We have families in which brothers and sisters don’t speak to one another over these issues, and I as a Christian, I can’t understand that. It breaks my heart.

SEVERSON: Laura Compton says since Proposition 8 the church leadership has become more flexible, making it known that members can still be in good standing even if they oppose the church’s position.

Ms. COMPTON: This has not challenged my faith, no. My faith is independent of the morality or the politics of gay marriage. It’s deeper. My faith is in a Christ who loves everybody and wants everyone to come to him, and a God that loves the world no matter whether they are Mormon or Muslim or Jewish or Catholic, and wants all of us to be there and all of us to treat each other like we’re brothers and sisters and not like we’re them and us.

Mr. REES: The function of faith communities is to make a home a for us, and I think that many of our Latter-day Saint brothers and sisters feel homeless, because we haven’t created a home for them. But I see that changing. I think there is much more understanding.

SEVERSON: As other states take up the issue of gay marriage, Mormon church leaders this time around have not asked members to get involved. Meanwhile, the California Supreme Court is once again considering the constitutionality of the ban on gay marriage. Their decision is expected soon.

Proposition 8 passed in California mainly because Mormon churches mobilized for it. The Church of Jesus Christ of Latter-day Saints withstood blistering criticism from outside the faith. Now, resentments are festering inside the Mormon community.