Read an excerpt from the novel Home by Marilynne Robinson:

The church of their childhood was gone, the white clapboard church with the steeply pitched roof and the abbreviated spire. It had been replaced by a much costlier building, monumental in style though modest in scale, with a crenelated Norman bell tower at one corner and a rose window above the massy entrance. Someone whose historical notions were sufficiently addled might imagine that centuries of plunder and dilapidation had left this last sturdy remnant of grandeur, that the bell tower might have sunk a dozen feet into the ground as ages passed. The building was reconsidered once or twice as money ran out, but the basic effect answered their hopes, more or less. “Anglicanism!” her father had said, when he saw the plans. “Utter capitulation!” His objections startled the elders, but did not interest them particularly, so they drew discreet conclusions about his mental state. Nothing is more glaringly obvious than discretion of that kind, since it assumes impaired sensitivity in the one whose feelings it would spare. “As if I were a child!” her father said more than once, when the decorous turmoil of his soul happened to erupt at the dinner table. 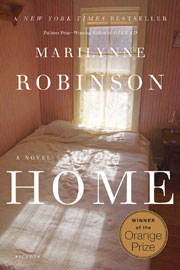 This was a grief his children had never anticipated. Nor had they imagined that their father’s body could become a burden to him, and an embarrassment, too. He was sure his feebleness inspired condescensions of every kind, and he was alert for them, eager to show that nothing got past him, furious on slight pretexts. The seven of them telephoned back and forth daily for months. He was in graver pain than he was accustomed to, and his dear old wife was failing. He was not himself. Ames sat with him for hours and hours, though even he was not above suspicion. They pooled strategies for softening the inevitable blow of his retirement, which would have been a mercy if it had come about under other circumstances. Ah well. He came back to himself, finally, reconciled to loss and sorrow and waiting on the Lord.

Now Glory was the family emissary. At holidays they went as a delegation, there to signal reconciliation not quite so complete as to induce her father to struggle up those stone steps. The no longer new pastor was youngish, plump, smiling. His admiration for Reinhold Niebuhr brought him to the brink of plagiarism now and then, but he meant well. She was always the object of his special cordiality, which irritated her.

For her, church was an airy white room with tall windows looking out on God’s good world, with God’s good sunlight pouring in through those windows and falling across the pulpit where her father stood, straight and strong, parsing the broken heart of humankind and praising the loving heart of Christ. That was church.