KIM LAWTON, correspondent: John Green is director of the Ray C. Bliss Institute of Applied Politics at the University of Akron. He says with the Democratic Congress and the new Obama administration, religious conservatives have been adjusting to their new lack of access to the political power structure.

JOHN GREEN (Director Ray C. Bliss Institute of Applied Politics, University of Akron): Religious conservatives are not completely shut out because, of course, they still do have some Republican and even some of conservative Democratic office holders that pay attention to them. But, really, the access belongs to the other side, to the progressive religious activists, whether they’re Protestants or Catholics or Jews, who very much took advantage of the change in party control in Washington.

LAWTON: And are these moderate and liberal religious activists having an influence? Are they making an impact on policy? 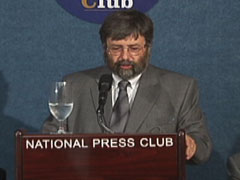 GREEN: Influence is always a difficult thing to judge while a process is under way. You know, we can look back ten years later and say, “Boy, that made a difference.” But it is certainly widely perceived by scholars, by journalists, by other observers that religious progressives are having an impact on the Obama White House, on the Democratic Congress, on the development of a wide range of policy proposals, from health care to climate change to poverty, and so forth. Exactly what that turns out to be we don’t know, because the process is not finished yet.

LAWTON: And what about the mood within these groups on the right and the left? How are they seeing themselves after the last election?

GREEN: The progressive side seems to be very excited right now. They really believe that they are in the ascendancy, that they’ve had some success, and, of course, people can point to some success—that they’re growing, that they’re reaching out to larger groups of people.

Right after the 2008 election there was some real discouragement among religious conservatives, although some of those individuals that I’ve interviewed noted that they were pretty discouraged before the election, because things were not really going the way that they had hoped. But there’s a renewed sense of hope on that side as well. There’s a sense that they have a way that they can now engage in the political process and that some of the things that President Obama wants to do are not very popular with some parts of the public, and religious activists see an opportunity on the right to mobilize some opposition. So they’ve really moved from being quite discouraged to being quite optimistic and quite active. But it’s a different role. It’s the role of being in opposition and not the role of having the insider connections. One of the things we know about religious conservatives, going all the way back to the days of the Moral Majority, is that they tend to prosper in opposition.

LAWTON: Green says one surprising issue that has been galvanizing religious conservatives is health care.

GREEN: You know, who would have thought a few years ago that religious conservatives would be organizing around health care? But, in fact, they are—in some ways to oppose President Obama, but in some ways to try and influence the debate and get whatever outcome actually occurs closer to their values. So it’ll be really kind of interesting to see what happens over the next year, because there might be a lack of access, but there’s no lack of activity among religious conservatives.