BOB ABERNETHY, host: We have a profile of the much-honored writer Marilynne Robinson. She received the Orange Prize for fiction this past summer, in Britain, for the best writing in the English language by a woman. Five years ago, she won a Pulitzer Prize for her novel Gilead, and her latest book, Home, has also had glowing reviews. Robinson is a mainline Protestant with great respect for Calvinist theology and strong opinions about the world around her.

Marilynne Robinson’s view of the world was formed in the mountains of Idaho, where she grew up. In the solitude and wilderness she sensed a larger presence. 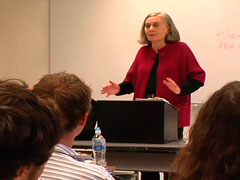 MARILYNNE ROBINSON: That never felt like emptiness. It always felt like presence. It always seemed as if there was something extraordinary around me. The holy is at the origins of everything that exists. Everything.

(reading aloud from one of her essays): “So I have spent my life watching, not to see beyond the world, merely to see, great mystery, what is plainly before my eyes.”

ABERNETHY: In Iowa, where she lives now, teaching writing at the University of Iowa, Robinson tells her students to think for themselves.

ROBINSON: I want them to know that they have their own testimony to offer, that if they are good observers, if they are thoughtful people, if they have the courage to evaluate things independently they will give the world something new, something worth having.

ABERNETHY: Which is exactly what her admirers say Robinson herself has done.

Robinson is a regular churchgoer at the Congregational United Church of Christ in Iowa City, and she sometimes preaches there.  She loves the old Protestant Mainline.

ROBINSON: I think of them as being people who are serious about things that deserve, you know, serious attention, for example, social problems. They are very open to acknowledging the value of other religious traditions and tend very much away from harsh judgments.

ABERNETHY: Robinson has great respect for the 16th-century reformer John Calvin, who she says was far more compassionate than his stern reputation suggests—for instance, about forgiveness. 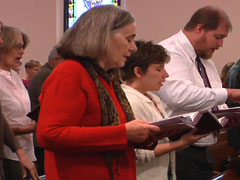 ROBINSON: The assumption is that forgiveness is owed wherever God might want forgiveness to be given, and we don’t know, so you err on the side of forgiving. You assume your fallibility, and you also assume that anybody that you encounter is precious to God—or is God himself.

ABERNETHY: So you cannot judge. You have to forgive. But Robinson is very critical of the work of the so-called new atheists.

ROBINSON: I think this sort of avalanche of literature we have gotten lately is very second-rate. It simply is not well informed and not well considered. I mean I consider it to be kind of noise.

ABERNETHY: She is deeply worried about the degradation of the earth’s environment, especially its oceans, and she is scathing on popular, commercial culture.

ROBINSON: The idea that everything always has to push some extreme, you know, be more violent, be more sort of disrespectful of human life, and so on—there’s a cynicism about it, things that have to do with mayhem, that make it look like it would be a lot of fun, you know, to wipe out your adversaries or something like that, that really treat people like dispensable, you know, items.

ABERNETHY: Do you see it as a barrier to religious life?

ROBINSON: I think it’s a severe distraction. We have to think that people are sacred. Human beings have to be considered sacred. That’s the beginning.

ABERNETHY: And the political climate?

ROBINSON: It’s a little shocking when you hear people say, like about this health thing we’re going through now, what’s in it for me, you know? That’s a huge change in the basic values of the culture. I got sort of tired when I was a kid of hearing people say you have to leave the world better than you found it. But now I think I would burst into tears if somebody said that to me—just, what a lovely thought, you know? 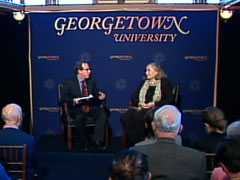 ABERNETHY: In spite of her love of solitude and lonely observation, Robinson’s reputation as a novelist and her strong opinions have made her a popular speaker—a soft-spoken prophet. At a forum at Georgetown University she was asked about being a contrarian:

ROBINSON (speaking at Georgetown University): I don’t feel as if I am contrarian. I feel as if everyone else is. No, that’s an exaggeration, but I do think there is a great deal in the culture that abrades and offends people in general.

ABERNETHY: She made it clear that at the same time that she embraces Christianity she is also respectful of the secular.

ROBINSON (speaking at Georgetown University): I know many, many, many, many people who authentically deserve to be described in that word whom I cannot imagine that God would not love. I have no conception of God that would not include love for these people.

A lot of the things that I criticize, I think, are in their impact inhumane. My loyalty really is to human loveliness, and the deep experience of self that every self deserves, you know, and the deep acknowledgment that everyone owes to everyone else.

If you were to think of yourself looking back on life, I think that some of the things that would please you most deeply are that at some moment you were—you comforted your child, or in one way or another you soothed, you fed, you were adequate, you know? These things are very beautiful and, I think, sacramental.

ABERNETHY: Back in her house in Iowa City, Robinson writes in whatever room she feels will be the most supportive. She is working now on a book about the Bible. She writes fiction in longhand with a ball-point pen in a college-ruled spiral notebook. Nonfiction goes in her computer. She also walks her toy poodle, Otis, named for the late musician Otis Redding. As she walks, she says, she thinks—how to fix “the rattle,” as she called it, in a sentence she had just written. Maybe, too, how to fix the world she says, echoing Calvin, the world God has given us to enjoy.