BOB ABERNETHY, host: Now, a profile of writer, liberal activist, and Harvard University theologian Harvey Cox on the occasion of his remarkable retirement ceremony after 44 years of scholarship and teaching. The celebration had everything—good weather, old friends, short speeches, laughter, and music, all starring the honoree.

That’s Cox, the Hollis Research Professor of Divinity, on the tenor sax with his big swing band the Soft Touch. The chair Cox has held was endowed in colonial times, when some professors got to graze cows in Harvard Yard. 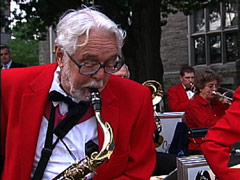 ABERNETHY: For this occasion, Cox borrowed a cow whose name turned out to be Pride. Cox pretended that he had been worried that a cow so named might be inappropriate for an event at the divinity school, but then another professor reassured him.

PROFESSOR HARVEY COX: He said, “Harvey, at Harvard we do not consider pride to be a sin.”

ABERNETHY: There was a tuba ensemble, a speech in Latin, and many tributes to Cox’s lifetime of combining the study and teaching of religion with a commitment to liberal activism—and, of course, the more or less contented cow and signed copies of Cox’s latest book, The Future of Faith. We talked with Cox about what he sees as religion’s surprising strength.

COX: The resurgence of religion around the world and the various religious traditions, which is unexpected, global—there were people who were predicting the marginalization and even disappearance of religion in my early years as a teacher. That disappearance, that marginalization did not happen. It’s a basic change in the nature of our civilization. It will continue.

ABERNETHY: Except for fundamentalisms, Cox says, in all religions.

COX: Fundamentalisms—I use the word in the plural. I do not think that they’re going to last out much longer.

ABERNETHY: For Cox, that includes the religious right.

COX: The last couple of elections have exposed the religious right as really kind of being in part a paper tiger. They just didn’t produce the votes. I think they are in considerable disarray and, frankly, I’m not mourning over that.

ABERNETHY: Meanwhile, especially in Christianity, Cox sees a shift away from beliefs and hierarchies to an emphasis on individual faith.

ABERNETHY: Cox sees this most clearly in Pentecostalism, which he calls the fastest growing branch of Christianity. He also says Pentecostalism is now balancing its well-known exuberance with more and more social service. 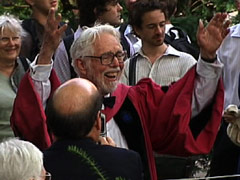 COX: This combination of social ministry and experiential worship is a dynamite combination.

ABERNETHY: Within Protestantism, Cox takes some of the blame for the decline of many of the old mainline churches.

ABERNETHY: As Cox looks at the US, he sees a huge social problem.

COX: A rampant culture of market-consumer values really has a grip on many people in America. Everybody seems to be driven by, especially, the lure of advertising, which says you ought to have this, you really need this, you owe it to yourself to have this and that. I think the role of religion at this point is to make very clear that this structure of values, of consumer values, is not coherent with Christianity, with the gospel, with the life and example of Jesus. That’s not what he was talking about.

ABERNETHY: Cox condemns the so-called prosperity gospel, preaching that says if people are faithful God will make them rich.

COX: Can you imagine that kind of sermon coming from the mouth of Jesus himself? No. I mean, it’s a rank contradiction. It’s really, let’s call it by its name—it’s a heresy.

ABERNETHY: Cox has been a popular teacher. One year a thousand students signed up for one of his courses. It is the students now who give him a lot of hope.

COX: The change that I’ve seen is the enormous growth in the hunger and interest in religion and spirituality among students at this university. It’s phenomenal. When I first came here we didn’t even have a religious studies program at Harvard College. I notice increasingly among my students, both undergraduates and students in the divinity school, a deep suspicion of this life of accumulating, consuming, to the soul, the dangers to the soul of consumerist values. Let me tell you that the urge to graduate from college, like this one, and immediately go down to a Wall Street investment firm is greatly shrunken this year from what it was last year.

ABERNETHY: At his retirement ceremony, Cox’s wife Nina was beside him. She, too, is a scholar and professor. She is also Jewish. Cox is an American Baptist. They have a college-age son. 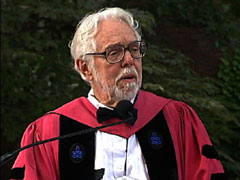 COX: We did not want our marriage to be one of these religion-free zones.

ABERNETHY: So out of respect for Jewish law and custom when the mother is Jewish, their son was raised Jewish. Cox became his Judaism teacher.

COX: We have successfully shared in each other’s spiritual traditions, and it can be done, and it’s also very enriching. I really believe that I understand Christianity better having participated in Jewish life—and remember, Jesus was a rabbi—than I would have if I hadn’t done that.

ABERNETHY: Cox also told a bookstore audience this week about religions borrowing from each other.

COX: I’ve been to three or four synagogues recently where they have quite obviously introduced forms of Buddhist meditation within the synagogue service. When we have the opening chant here let’s hold it for a very long time, the way you might hold “Om”—but they say “Shalom.”

ABERNETHY: As Cox studies the variety of religions in the world, he says he has made a big adjustment.

COX: I have learned how to think about Christianity as one of the possible religious and symbolic ways to approach reality, among others. The plurality of religions in the world is a check on any one of them, including ours, not to get too pretentious and think that we have the whole truth. One of the most dangerous things in any religion is to identify my understanding of the truth, my take on it, with the truth itself. The truth itself is something out there, it’s absolute, but my take on it is relative. God is larger than this. God is much larger than any particular understanding of God.