Read an excerpt from The Future of Faith (HarperOne, 2009) by Harvey Cox:

It is true that for many people “faith” and “belief” are just two words for the same thing. But they are not the same, and in order to grasp the magnitude of the religious upheaval now under way, it is important to clarify the difference. Faith is about deep-seated confidence. In everyday speech we usually apply it to people we trust or the values we treasure. It is what theologian Paul Tillich (1886-1965) called “ultimate concern,” a matter of what the Hebrews spoke of as the “heart.” 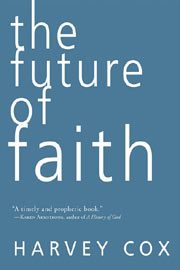 Belief, on the other hand, is more like opinion. We often use the term in everyday speech to express a degree of uncertainty. “I don’t really know about that,” we say, “but I believe it may be so.” Beliefs can be held lightly or with emotional intensity, but they are more propositional than existential. We can believe something to be true without it making much difference to us, but we place our faith only in something that is vital for the way we live. Of course people sometimes confuse faith with beliefs, but it will be hard to comprehend the tectonic shift in Christianity today unless we understand the distinction between the two.

The Spanish writer Miguel Unamuno (1964-1936) dramatizes the radical dissimilarity of faith and belief in his short story “Saint Manuel Bueno, Martyr,” in which a young man returns from the city to his native village in Spain because his mother is dying. In the presence of the local priest she clutches his hand and asks him to pray for her. The son does not answer, but as they leave the room, he tells the priest that, much as he would like to, he cannot pray for his mother because he does not believe in God. “That’s nonsense,” the priest replies. “You don’t have to believe in God to pray.”

The priest in Unamuno’s story recognized the distinction between faith and belief. He knew that prayer, like faith, is more primordial than belief. He might have engaged the son who wanted to pray but did not believe in God in a theological squabble. He could have hauled out the frayed old “proofs” for the existence of God, whereupon the young man might have quoted the equally jaded arguments against the proofs. Both probably knew that such arguments go nowhere. The French writer Simone Weil (1909-43) also knew. In her Notebooks, she once scribbled a gnomic sentence: “If we love God, even though we think he doesn’t exist, he will make his existence manifest.” Weil’s words sound paradoxical, but in the course of her short and painful life—she died at thirty-four—she learned that love and faith are both more primal than beliefs.

Creeds are clusters of beliefs. But the history of Christianity is not a history of creeds. It is the story of a people of faith who sometimes cobbled together creeds out of beliefs. It is also the history of equally faithful people who questioned, altered, and discarded those same creeds. As with church buildings, from clapboard chapels to Gothic cathedrals, creeds are symbols by which Christians have at times sought to represent their faith. But both the doctrinal canons and the architectural constrictions are means to an end. Making either the defining element warps the underlying reality of faith.

Several years ago an acquaintance of mine described himself to me in a casual conversation as “a practicing Christian, not always a believing one.” His remark puzzled me, but it also began to clarify some of the enigmas that had swirled within both my personal faith and my thinking about religion and theology. His remark suggested that the belief/nonbelief axis is a misleading way of describing Christianity. It misses the whole point of not only Christianity, but other religions as well. I have never heard this insight expressed more eloquently than I did one evening in Milan, Italy, where in 1995 Cardinal Carlo Maria Martini had invited me to give a talk at what he called his annual “Lectureship for Nonbelievers.”

I had not known what to expect, but it turned out to be quite a glittering occasion. A large crowd draped in Armani and Prada had assembled in an ornate public hall, and I was already seated when Martini, who stands well over six feet tall, entered in a scarlet cassock and black biretta, the full regalia of a prince of the church. He welcomed the audience and then went on to say that by calling this an event for “nonbelievers” he did not intend to imply anything about the people present. “The line between belief and unbelief,” he said, “runs through the middle of each one of us, including myself, a bishop of the church.”