BOB FAW, correspondent: For people of faith, services which acknowledge, indeed commemorate, death can bring comfort or anguish. Thomas Beveridge’s Yizkor Requiem recognizes both. Performed here by the orchestra and chorus of London’s St. Martin-in-the-Fields, the music is emotional and cerebral—suggestive, even, at times, haunting. Conducted by Sir Neville Marriner and recorded for the Milken Archive of American Jewish Music, the Yizkor Requiem was composed by Beveridge not just to remind listeners of what Beveridge says “really matters,” but also to combine, musically, two faiths.

THOMAS BEVERIDGE (Composer and Conductor): I realized that I could put together a piece that kind of stands on the bridge between the two religions, the Christian religion and the Jewish religion, and takes a look at, simultaneously, at the ritual for the dead. 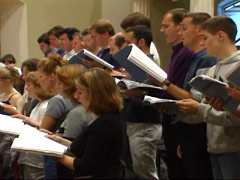 FAW: Beveridge says he was inspired to compose this piece after the 1991 death of his father, an Episcopal priest and scholar who immersed himself in both faiths. It was, says Beveridge, “a quest for spiritual roots.”

BEVERIDGE: My quest and my father’s quest. My father inspired me to look at the origins of Christian liturgy in the synagogue. I mean, that’s basically what we’re talking about here.

FAW: Was it an attempt to come to terms with his death, or to memorialize him, or both?

BEVERIDGE: I think both. I find it a very cathartic experience to make this effort in his memory, and in the process I learned a lot.

FAW: What Beveridge, a church organist, choir director, and composer of more than 600 works, learned over the two years he spent writing the Yizkor Requiem is that despite profound differences in theology, the two faiths share enormous common ground.

BEVERIDGE: I went through the Requiem Mass and found passages that were almost exactly the same as passages in the Yizkor service or in similar synagogue ritual, and that’s where the Mass came from. It came directly out of the synagogue. 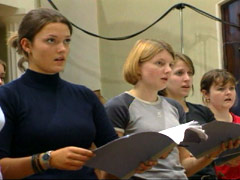 FAW: “Yizkor,” Hebrew for “may he remember,” is a memorial service for the deceased. The Requiem is the music for a Catholic funeral service, seeking eternal rest for the departed. While a Requiem emphasizes comfort, and the Yizkor can be sad, musically they reinforce one another.

Here, for example, as the cantor sings the Kaddish in Hebrew, the chorus underneath sings the Lord’s Prayer in English—each of them a doxology, a hymn praising God.

BEVERIDGE: The Kaddish is a doxology. The Lord’s Prayer is a doxology, though the Yizkor Requiem begins with the Kaddish prayer, which is what every Jew says at the Yahrzeit, the annual remembrance of anyone in his family who has died.

But make no mistake: while much of this composition is solemn, parts are also light-hearted, or what Beveridge calls “lickety-split.” “I wanted,” says Beveridge, “to give the impression of a train that gets going and keeps going, going along.” 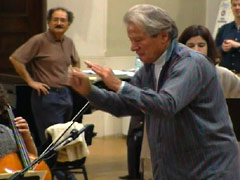 BEVERIDGE: It’s not all very ponderous stuff. There’s a lot of joy in it—the joy of recognizing that a departed soul may be resting in Eden, in the Garden of Eden.

FAW: Perhaps the most dramatic moment of all in the Yizkor Requiem comes at the end, when a single flute plays a plaintive theme. Finally, with the soft refrain of “Amen” by the chorus, the flute slowly fades away.

BEVERIDGE: The flute player turns around and walks out of the building and disappears, and the last phrase is played over and over and over again until the player can hardly be heard any more. I wanted to depict the departing soul somehow, and the flute playing the melody of the ninth movement, the words of which are “the souls of the righteous are in the hands of God.”

FAW: What Beveridge has done, says one reviewer, is “bring us back to our beginnings—and our endings” in a work which Beveridge says is meant to be reassuring, a peaceful work about the experience of death.

BEVERIDGE: I mean we are the ones who are left. We’re the ones who have to deal with this event in our lives and to try to understand it, try to find a way, through ritual or through musical experience, of coming to terms with it.

FAW: A spiritual lesson in music—bridging traditions which differ, but which also experience the same thing and which here come together as one.

For Religion & Ethics NewsWeekly this is Bob Faw in Washington.