BOB FAW, correspondent: Sometimes for an autistic child like Elizabeth, cheered on here by her father—

FAW: Sometimes there are small victories—

FAW: —and the demons of autism loosen their grip. Too often, though, for Elizabeth there are other moments of seemingly impenetrable darkness and frustration. Unable to speak, Elizabeth communicates now by finding letters on a letterboard or typing into a keyboard. Even that, says her mother Ginnie, does not spare Elizabeth moments of agony. 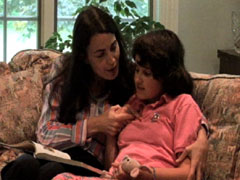 GINNIE BREEN: I remember so distinctly one of the first things she typed out: A-G-O-N-Y, agony. This was a little six-year-old child, and she knew what agony was, and then she wrote, “I need to talk”—that that was her agony.

FAW: She wasn’t always like this. In her first 15 months, Elizabeth was healthy, active, alert, even verbal. Then she changed drastically.

GINNIE BREEN: Besides the complete loss of language within a week, she did start to have repetitive behavior and have frustrations and tantrums and really kind of left us.

FAW: Researchers suspect genetic and environmental factors cause autism. It is characterized by unconventional facial expressions, limited motor and social skills, and difficulty communicating—a life largely dependent. For Elizabeth’s parents that diagnosis was devastating enough, but they were also told there is no reliable treatment, no guaranteed cure, and ten years later not that much has changed, says Dr. Anthony Rostain, an expert on autism at Children’s Hospital of Philadelphia.

DR. ANTHONY ROSTAIN (Children’s Hospital of Philadelphia): It really affects almost every aspect of how the child thinks, acts, feels, and develops both cognitively and emotionally. So, as a result, it’s hard to come up with one-size-fits-all kind of treatment.

FAW: Elizabeth’s parents, Ginnie and Ray, both enjoyed lucrative Wall Street careers but gave them up to focus on their three children and the battle against autism. Early on, behavorial therapy exercises like this, they were told, might help Elizabeth to organize the chaos in her mind, help her to learn how to learn.

Teacher to Elizabeth: Show me jumping. Turn around. Good job. Can you show me sitting? Nice job.

FAW: Since she was three years old, her school district has paid a full-time professional aide to help Elizabeth academically.This is what a respected speech therapist believed might help loosen Elizabeth’s tongue. It turned out to be more fun than effective.There have also been years of special diets and vitamin supplements and homeopathic drops costing hundreds of dollars every month, a $20,000 hyperbaric chamber, which pumps extra oxygen into her brain for an hour every day, even unproven therapies like these prism lenses which distort Elizabeth’s vision in hopes of reordering the way her brain processes information. 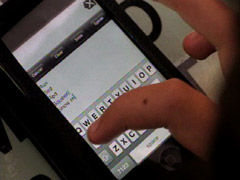 FAW: Are you convinced that this has benefits?

GINNIE BREEN: I believe that this has helped other children.

FAW: Parents of autistic children face a terrible dilemma. They are forced literally to experiment on their own children because the medical community has not tested and proven those treatments the way it has with treatments for physical conditions like heart disease or cancer.

DR. ROSTAIN: We are in very, very, very early stages of understanding how medications might improve functioning.

FAW: You don’t fault a parent for trying everything conceivable?

FAW: What has happened to Elizabeth has happened with countless other autistic children—so many interventions with success only hit or miss. Ethicist Arthur Caplan:

PROFESSOR ARTHUR CAPLAN (Center for Bioethics, University of Pennsylvania): I could take you online and find tons of quacks, rip-off artists, selling quote unquote “treatments” to parents of kids with autism. It is a huge problem.

FAW: It is also an ethical minefield: Does society have the responsibility and can it afford to help autistic children who lack the resources lavished on Elizabeth? If so, should that task fall, as it mostly now does, on local public schools?

PROFESSOR CAPLAN: You can’t do it that way. Obviously, different school districts have different amounts of money. We need a national policy to divvy up resources to autistic kids, not the school board budget. That makes no sense at all. 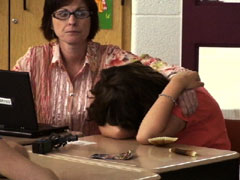 FAW: One intervention which has worked well for Elizabeth began five years ago in Austin, Texas with language therapist Soma Mukhopadhyay, who taught Elizabeth to use the letterboard. Then, a stunning turn in Elizabeth’s life: At the urging of her personal education aide, Terri Bird, Elizabeth began writing powerful, often deeply personal poetry, turning some of her frustration into inspiration, and for the first time, those around Elizabeth discovered her inner voice. For example: “…It’s not easy, you see, it’s very hard being me. / There is so much going on in my mind / All of the time.”

FAW (to Elizabeth): Why do you write poems?

FAW: Your feelings—that’s why you write poems. Elizabeth is, says her mother, “a very spiritual child,” and some of her poems are religious.

FAW: Elizabeth has written 90 poems thus far. Many reveal her yearning to be heard.

GINNIE BREEN (reads from poem “Me”): If only they could walk in my shoes / They would share my news / I am in here / And trying to speak / Every day in some kind of way.

FAW: Sentiments echoed in this anthem written for children with autism.

Vocal music: “Oh, don’t you know I’m trying to find a way to show you who I am…”

FAW: Because she can communicate, Elizabeth, accompanied by Terri, also attends a mainstream public school where she excels especially in math.

TEACHER: Find the greatest common factor of 18 and 24?

FAW: Her teachers marvel at her performance and persistence. 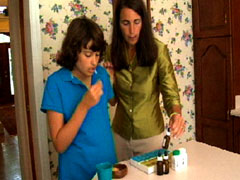 KERRI BENSON (Math Teacher): She’s taught me about patience, and I just, I can’t even begin to explain that I’ve probably learned more for her than anybody in life so far.

FAW: Elizabeth is warmly received by other students. Besides writing, Elizabeth can read with remarkable speed, and Terri tests her comprehension.

TERRI BIRD (Education Aide): Doing this job with Elizabeth is the most rewarding thing I’ve ever done in my life.

FAW: Elizabeth’s success and her failures—this two-steps-forward, one step back—have been physically exhausting and emotionally draining for her and her family. It has also severely tested her mother’s faith.

GINNIE BREEN: It’s a natural thing to cry out where are you, God? I mean, I’m calling here in the darkness, and I can’t take too much more sometimes.

FAW: And though she on occasion has wavered, her beliefs have emerged stronger.

(to Ginnie Breen): Has it reinforced you faith?

GINNIE BREEN: Absolutely. There are times I know that we are being blessed on the right path here, and I’ll pray about it, and we’ll move forward.

FAW: Whether Elizabeth will eventually speak is, at best, a long shot. She may, her mother concedes, always need assistance, which is why in this household success is measured one day, one small victory, at a time.

GINNIE BREEN: I want to be able to say I have done everything to make my little girl talk. I mean, how can I hear her say, “I’m in agony because I can’t speak” and not try something? The data may say only one percent, but if that one percent is Elizabeth, that’s all I need, and she wants us to keep trying.

FAW: For Religion and Ethics NewsWeekly, this is Bob Faw in Northern New Jersey.