Audio from ad: “All five committees defeated amendments that would have stopped an abortion mandate…”

KIM LAWTON, correspondent: Abortion opponents have already launched an aggressive lobbying campaign. This new ad is from the group Americans United for Life.

CHARMAINE YOEST (President, Americans United for Life): Polling shows over 70 percent of Americans don’t want to see their tax dollars going for it, so that’s what this debate is over, is not whether or not you agree or disagree with abortion, but whether or not at the federal level we’re going to pay for it. 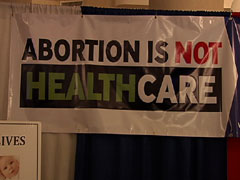 REV. DEBRA HAFFNER (Executive Director, Religious Institute): We believe that abortion should be safe, legal, rare, and accessible, and that a health care reform should not make it more difficult for women to get abortions in this country.

LAWTON: In his address to a joint session of Congress last month, President Obama made a clear promise.

PRESIDENT BARACK OBAMA (speaking to Congress): Under our plan, no federal dollars will be used to fund abortions.

LAWTON: But working that out legislatively has been complicated. The current House and Senate proposals do not explicitly prohibit abortion coverage. Congressional leaders say the bills would comply with the so-called Hyde Amendment, which restricts most abortion funding in Medicaid. Abortion opponents say that’s not good enough.

YOEST: Unless there’s an explicit exclusion of abortion, abortion will be in health care reform.

LAWTON: Yoest and her fellow activists also object to proposed compromises that would require insurance plans offering abortion coverage to keep public and private funds separate and use only the private funds to pay for abortions.

YOEST: A lot of the solutions that we see involve a lot of really fancy accounting gimmicks, and that’s exactly what it is, is it’s just moving money around from pot to pot in order to try to promote this fiction that somehow we’re not paying for it just because the money is being funneled through a particular channel.

LAWTON: But pro-choice activists say, given the legal right to abortion, that compromise is the very least Congress owes women.

HAFFNER: There may be a lot of medical services that I might disagree with that I wouldn’t want a member of my family to have, but that’s not up to me. If we care about the very difficult situations that women and families find themselves in, then out of that compassion we would make sure that women would have access to all options. 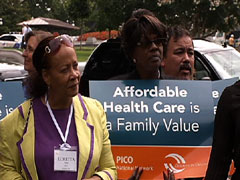 LAWTON: Faith-based moderates and liberals have been actively pushing for health care reform as a moral issue. Many are worried that abortion debates will derail their efforts.

REV. ANDREW GENSZLER (Director of Advocacy, Evangelical Lutheran Church in America): We think that in some sense it’s a distraction. I mean, it’s an important issue, a very important issue, but in the context of a country where a growing number, millions and millions of people, don’t have insurance, health insurance, we feel that’s more the main issue for this particular debate.

LAWTON: The issue has already become a rallying point for religious conservatives.

REP. MIKE PENCE (R-IN): The American people will not stand for government-run insurance that uses taxpayer money to fund abortions in this country.

HAFFNER: I’m really disappointed that, once again, women’s lives, the desperate situation that so many women find themselves in, the desperate situation that so many poor women face is being used as a political football. I think it’s morally unconscionable that we are segregating some health services. Abortion’s a health service.

YOEST: It’s really troubling to us that we face a future where we might not be able to make a fundamental difference between abortion and a tonsillectomy. For millions of Americans across this country, abortion is a morally objectionable activity, and so for us to lose the ability to differentiate with a tonsillectomy would be a real, real tragedy.

LAWTON: Activists on both sides of the abortion issue are mobilizing for some key battles in the next few weeks. Both the House and the Senate are expected to begin floor debates on health care reform by the end of the month, and the Obama administration hopes a final bill will be passed by the end of the year.