LUCKY SEVERSON, correspondent: Volunteers signed up by the thousands to lend a helping hand to people in need, and here in Portland, Oregon, where unemployment reached 12 percent this year, there are a lot of people in need. And with tax revenues down, the city needs help providing even basic services, like maintaining public schools, particularly in low-income neighborhoods. Roosevelt High, for instance, might get a visit from a maintenance man once this year if it’s lucky. Devon Baker is an administrator at Roosevelt.

DEVON BAKER (School Administrator): It does something for you, in your heart, you know, if you’re one of the staff members and suddenly the building is clean, it’s ready to go. It’s a real partnership with a lot of folks that just really makes you feel like, wow, people really do care. 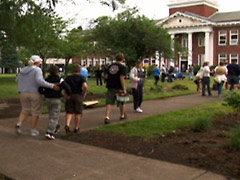 SEVERSON: What makes this effort so extraordinary is not that it’s church members doing the volunteering—there are about 500 churches involved this year, including Catholic and mainline Protestant. But the majority of the 26,000 volunteers are evangelicals intentionally not here to proselytize, but to show their faith by doing good deeds such as scrubbing windows and even working in harmony with one of the most liberal cities in the US and its openly gay mayor,  Sam Adams.

SAM ADAMS (Mayor of Portland): If I could have them do it every month in my city I would, so thank you.

SEVERSON: The organizer of Season of Service, which is now in its second year, is Kevin Palau.

KEVIN PALAU (Executive Vice President, Luis Palau Association): Portland is a very proudly liberal city. This is not the Bible belt, and so to have that kind of cooperation between churches and city leaders on a long-term basis, I think, is unprecedented.

SEVERSON: Palau is the son of Luis Palau, who has staged huge evangelism festivals around the world. His son chose a slightly different path, one he thinks will put Christ’s teachings into action and, perhaps, change the image in a secular city that some have of Christians. The purpose, he says, is not to preach or proselytize. 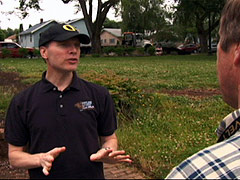 PALAU: We’re not doing this so that we can preach the Gospel. We’re doing this to demonstrate the love of Christ, and absolutely we’re not hiding the fact that we want people to come into relationship with Christ, but realistically through this it’s going to happen more relationally and organically, and that’s okay.

WAYNE ABBOTT (Volunteer): Season of Service works because Jesus told us that he was here to serve, not be served, and there’s absolutely no reason why we can’t just take a few minutes out of a busy day and our busy lives every once in a while and do exactly what he did.

SEVERSON: The extensive work done sprucing up Roosevelt High, outside and in, would have cost the city about $200,000. Deborah Peterson is the principal.

DEBORAH PETERSON (Roosevelt High School Principal): When good people of good will come together and honor one another and believe in hope, miracles happen, and that’s what’s happening today. 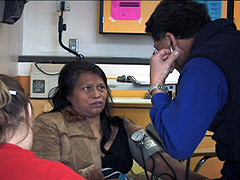 SEVERSON: The churches also raised $100,000 to help the increasing numbers of homeless. Then they sponsored what they call compassion clinics throughout the city, offering free medical and dental care. These clinics were overbooked within the first half-hour with mostly uninsured patients. These clinics cared for as many as 200 patients each day—grateful patients. Churches even sponsored the mobile medical truck.

KRISTINE SUMMER (Volunteer): For the church love has to be a verb, and this is what it looks like.

JEFF PALEN (Volunteer): This is love in action. This is what Christ did for all of those 5,000. He fed them, he preached to them, he shared with them, and he loved them.

SEVERSON: Love includes free veterinarian care for their pets and haircuts for their owners. Kevin Palau says loving thy neighbor is what Season of Service is all about.

KEVIN PALAU: So our hope is that, long-term, this does lead to a lifestyle of service and sharing the Gospel by how we live.

SEVERSON: Mayor Adams said the thousands of volunteers had made Portland and its suburbs a better place.

SEVERSON: Season of Service was topped off with a carnival that may have been as important as any of the other events—an opportunity for families to simply have fun in hard times and experience what neighborly love can do when it’s put into practice.