BOB FAW, correspondent: At Le Bonheur Children’s Medical Center in Memphis, Tennessee, four-year-old Ethan Barker might seem carefree. But his parents, Chris and Tamara, are frightened about Ethan’s upcoming brain surgery. So when neurosurgeon Dr. Stephanie Einhaus asks if the family would like to pray, they readily agree.

DR. STEPHANIE EINHAUS (praying with family): We come before your throne today, Lord, asking for your blessing on this sweet child of yours.

FAW: Ethan’s surgery is delicate. Einhaus takes a bone from his skull and modifies it to cover a space created by an earlier surgery.

DR. EINHAUS: (in operating room): …the bone of the skull is kind of in two layers and so you can split it like an Oreo cookie… 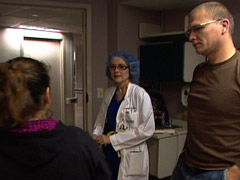 FAW: For this skilled practitioner, praying benefits her as much as the patient’s family.

DR. EINHAUS: If I’m having a hard time doing something, getting a catheter in a fluid space, I’ll just pause and in my own head I will pray, “Please, Lord, help me get this right.”

FAW: Einhaus says praying with families helps them with the stress and gives them hope.

DR. EINHAUS: It helps them to hold on to something to get through, you know, that crisis that’s going on. Most people want to do it. They’re like, they’re so relieved.

FAW: Eleven-year-old Holly Barkley, about to undergo surgery to drain fluid from her brain, does not face a crisis.

FAW: But her family also wants to pray.

DR. EINHAUS (praying with family): I pray that you will let this family feel your power, let them feel your peace, Lord…

FAW: Prayers like that, family members agree, can bring comfort.

CHRIS BARKLEY: It puts a sense of comfort in you. Normally, doctors don’t do that, and it probably makes people feel closer to the doctor. You want them to care just as much as you do.

LAURA YOUNG (Holly Barkley’s mother): It was more of the Lord was on our side, and it told me then it was going to be okay, and you know I was ready to—if anything came out negative, I was ready to face it.

DR. EINHAUS (to Ethan’s family): Hello. We are all done, and it went great.

FAW: Einhaus, raised Catholic and now a Southern Baptist, was once reluctant to pray with patients in the beginning for fear of being ridiculed. But as time went on she felt more comfortable asking patients if they would like to pray.

DR. EINHAUS: Once you start doing it you realize how much people really like doing it and how powerful it can be as a support for not only the patient but for the families.

FAW: You regard your role as a physician as a kind of ministry.

DR. EINHAUS: I do, I absolutely do. 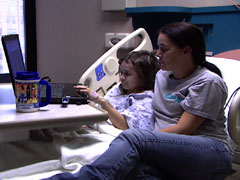 FAW: In this part of the Bible belt, many patients—like Marletta Scott, facing difficult triple bypass heart surgery at Methodist South Hospital—say they would welcome a chance to pray with their doctor, even though Marletta Scott’s doctor, heart surgeon Alim Khandekhar, happens to be Muslim.

MARLETTA SCOTT: He did explain to me that, overall, that, you know, it was in the Lord’s hands and that he’d be watching over him as well as me during this procedure. I mean, and that’s all that we can ask for.

FAW: That makes you feel good, that gives you comfort?

MARLETTA SCOTT: Yeah, it does.

FAW: in his 32 years of professional experience, Khandekhar says he has found that patients with faith often recover faster.

DR. ALIM KHANDEKHAR: Because they rely not only on the doctors, the medicine, but they rely on a power that is more powerful than all of them, that puts them at ease with themselves, at ease with the decision they are making.

FAW: What all this suggests, especially in this part of the country, is a growing trend by physicians to treat physical and spiritual problems together. After all, says the founder of this Memphis clinic, 50 percent of the patients who come here for primary care do not have medical problems.

DR. SCOTT MORRIS (Founder, Church Health Center, and United Methodist Minister): Many of our physical complaints come about because of our spirits being broken. What they need is a way for us to help them deal with this spiritual devastation.

FAW: So here at the Church Health Center, which since 1987 has treated 60,000 low-income people without health insurance, the spiritual needs of a patient are addressed before they ever see a doctor.

DR. MORRIS: From my point of view, if we want to be healthier, you must have a healthy spirit as well as a healthy body. We know, I think, in our heart of hearts, that being at peace, being bathed in what a person perceives as the love of God, makes people healthier faster. 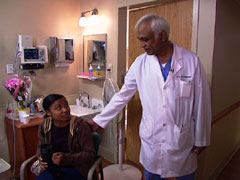 FAW: But mixing prayer with medicine can cause problems, especially when the goal of reducing suffering conflicts with the wishes of devout patients. For example, a recent AMA [American Medical Association] study found that patients of faith demand and get more aggressive treatment than is medically warranted, and there are also concerns that a patient can be exploited if a doctor uses prayer to proselytize, to promote certain beliefs.

PROFESSOR MARK MUESSE (Associate Professor of Religious Studies, Rhodes College): It might take the form of a particular kind of prayer that the patient might be uncomfortable with. It might include accepting certain kinds of creedal statements that the patient would not otherwise accept.

FAW: At Rhodes College, where he teaches comparative religion, Mark Muesse also worries that praying with a patient could compromise a doctor’s relationship with a patient.

PROF. MUESSE: There could be a boundary crossed there, that a doctor begins to lose his objectivity in relationship to a patient. You’re losing some of the critical distance, I think, that’s oftentimes necessary for proper medical treatment.

FAW: Physicians like Einhaus counter that even if that boundary is crossed, no harm need result.

DR. EINHAUS: No matter what, you’re going to develop a relationship with your patients, okay? So the fact that I’m praying with them may make that bond a little stronger, but in no way would it affect my judgment.

FAW: And that element of compassion, physicians argue, is what is often missing in the training many doctors receive.

DR. KHANDEKAR: During my training, you know, being a cardiac surgeon, I don’t think that part has been stressed enough. It helps me to have another power behind me to do what I do. I do not think enough doctors use this power.

FAW: Here, though, that recognition—that the spiritual can affect the physical—seems to be growing.

FAW: Shortly after his surgery, Ethan was almost as playful as before. Holly, too, was doing just fine. For each, medical technology prevailed.  But in this medical theatre, more and more physicians seem to be sharing a belief that there is more at work here than science and skill.

DR. EINHAUS: We’re not always in control. God’s always in control, and so things may not turn out the way we want them to. We may not like it.  We may not understand it this side of eternity. But we have to trust that he is still in control and that if they go and they die, that heaven is really a good place.

FAW: Here, where there is recognition that when in comes to healing, fixing the body alone is an incomplete, indeed, flawed approach.

For Religion & Ethics NewsWeekly this is Bob Faw in Memphis, Tennessee.