LUCKY SEVERSON, correspondent: The middle-aged woman struggling with the weak surf has quite a story to tell, one of heartbreak and despair and then a remarkable transformation. Her name is Mary Setterholm.

MARY SETTERHOLM: You know, I didn’t know that what I was going through was hell, but it was hell.

SEVERSON: There were the beatings, the sexual abuse, the prostitution.  She lost her faith in humanity and God. In 1972 when Mary was 17, she was the US woman’s national surfing champion. Now she owns and operates the Surf Academy in Santa Monica where she and 80 full-time staffers teach hundreds of kids each year how to ride the waves. Some classes for kids from the inner city she offers for free. Sister Sheila McNiff of the Los Angeles diocese met Mary in 2002.

(to Sister Sheila McNiff): What was your first impression? 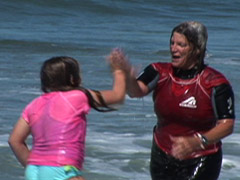 SISTER SHEILA MCNIFF: Amazement at somebody who had such a tragic story and yet had such a heart for reaching out to other people who were suffering and that was clear right from the beginning.

SEVERSON: Mary’s dad left home when she was a baby—ended up in jail. Her mom, working and getting a law degree, would leave Mary and her five brothers and sisters with a babysitter.

SETTERHOLM: This woman would put us in a backyard dog pen area and just leave us there.

SEVERSON: The babysitter beat the kids, and then her son and his friends gang-raped Mary several times.

SEVERSON: She went to a Catholic school, was admittedly a hell-raiser, and says she paid for it with violent thrashings from the nun who was her teacher. She remembers one beating in particular when she was 12.

SETTERHOLM: I fainted in this beating. I mean, my head was like a melon just banging against the wall. And so I look at the cross, there was a big cross, a horrible, bloody cross of Christ up on the wall, and I remember looking at that cross and going, “Save me.” I really experienced, like, a talking back from the cross, and it was, “Yes, this is what you go through. No one comes for you.” And when I heard those words I just fainted, not because of the beating, but because of what I heard—a truth about the cross.

SEVERSON: And then she was sexually abused by a now deceased priest.

SETTERHOLM: You know, they come out with their big robes, and everyone goes and hugs the father, but he would take me off to the side, and he would get busy right away fondling me.

SEVERSON: The ocean became her sanctuary—has been ever since she was six years old. As a teenager, she started hitchhiking to the beach, and that’s when she turned her first trick.

SETTERHOLM: I kind of fell into it, which is how it happens for most women. They don’t really have a cognitive thought, “I’m going to prostitute.”

SEVERSON: She wasn’t much older than some of the kids she coaches when she started turning tricks regularly—says taking money for sex gave her a feeling of control in a world where she had so little. But she’s convinced she almost lost control, almost lost her life to one man who picked her up. 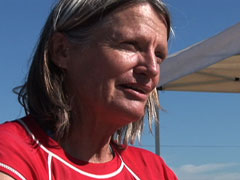 SETTERHOLM: I said, hey, I wanted to go to Newport, I thought you were going to Newport and he just backhanded me. He just started beating me, and while he was doing that I look at the car door, I want to just jump out, and its wired shut. There was no handle. It was a death trap.

SEVERSON: She used her surfboard as a shield and barely managed to jump out of the car. Her run of bad breaks continued after she moved to New York, married a Muslim, and had five kids she is still close to.

SEVERSON: But your husband—

SEVERSON: He was abusive, too.

SETTERHOLM: Yes, he was very abusive. I’ve been in two shelters for battered women.

SEVERSON: After her divorce Mary returned to prostitution. She was with a john when she experienced what became a transformational moment.

SEVERSON: After hearing all the stories about the Catholic Church’s sexual abuse scandal, Mary decided she needed to share hers. She contacted Sister Sheila McNiff, the LA diocese’s victims assistance coordinator, told her she wasn’t interested in monetary compensation, she simply wanted to help others like herself. After hearing her story, Sister McNiff asked her if she would tell it directly to Cardinal Roger Mahony.

SISTER SHEILA MCNIFF: Right away it was obvious to me that Mary had the capacity to steal his heart. My impression of Cardinal Mahoney is someone who is very serious, and you don’t get a warm, fuzzy side of him. But Mary found that place in his heart for really speaking her truth and speaking on behalf of other victim survivors.

SEVERSON: The cardinal asked her to become his emissary and tell her story to other victims. She gave the cardinal her surfing trophy, and it reportedly now sits on his desk. 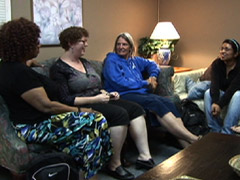 SISTER SHEILA MCNIFF: We were talking and she was saying she’d never finished college, and I was astounded, because clearly this was an articulate woman.

SEVERSON: So Mary went to Loyola Marymount University and got her bachelor’s degree in theology. Professor Jeff Siker is chairman of the theological studies department.

SEVERSON: Now that Mary is no longer homeless herself, she searches out those who are.

SISTER SHEILA MCNIFF: She finds homeless women in bushes. She’ll take them home and put them in the bathtub and put their clothes in the washing machine and take them down to a shelter. She knows the shelters, she knows the laws, she knows who to ask for help, and she’s just an incredible human being with compassion.

SETTERHOLM (speaking at Serenity Sisters meeting): “We come to believe that a power greater than ourselves could introduce us to our authentic self.”

SEVERSON: She started a support group for women with deep emotional problems and no one to share them with. It’s called Serenity Sisters. First Erica, then Donna:

DONNA: And it’s because of Mary’s nonjudgmental presence we are all welcome. All our stories are welcome.

SETTERHOLM: So the real call to me is to be present alongside “a sinner.” I have hope that they feel the presence of someone loving them. That is my number one objective.

SEVERSON: The Serenity Sisters will continue to meet while Mary moves to New York long enough to earn joint master’s degrees, one in divinity from the Union Theological Seminary, and one in social work from Columbia. She plans to use her education and her experience to help other women and kids escape the misery that was her life. She is going to New York because she knows she can’t study if she’s anywhere close to the surf.