BOB ABERNETHY, host: The Vatican announced plans to make it easier for disaffected Anglicans to convert to Catholicism. Cardinal William Levada, head of the Vatican’s doctrinal office, said new structures will be created to accommodate growing numbers of Anglicans who want to leave the worldwide Anglican Communion because of disputes over homosexuality and female clergy. Under the new plan, those Anglicans can become Catholics while still maintaining some of their distinctive beliefs and practices, including the tradition of married priests. Our managing editor, Kim Lawton, is here, and so, from Denver, is John Allen, longtime Vatican correspondent for the National Catholic Reporter. Welcome to you both. John, what’s the Vatican up to here? Is it fishing for converts?

JOHN L. ALLEN, JR (National Catholic Reporter): Well, officially, Bob, the answer to that question is no. I mean, some Anglicans may see it that way, but the Vatican’s position is we didn’t go looking for these folks. They came to us. That is, there is a small but significant number of more traditionalist Anglicans who very publicly have asked to be received into the Catholic Church, and the Vatican’s line is that even though we didn’t solicit them, when people knock on our door we have a responsibility to open it up.

ABERNETHY: And Kim, what do you hear—reaction from the Anglicans?

KIM LAWTON: Well, officially, the spiritual head of the 77-million-member Anglican Communion, Archbishop of Canterbury Rowan Williams, has been, you know, somewhat positive about this. He says he does not see it as an act of aggression from the Catholic Church, but certainly his church body has been under enormous pressure from a lot of fronts, and this one more front, one more sort of exit possibility for many Anglicans who are unhappy with what’s been going on in their church.

ABERNETHY: What do you both think, John first, what do you think about the numbers that will be involved here? Will it be a lot of people that are switching, or just a few?

ALLEN: Well, the signals from the Catholic side, at least, is that expectations are this is going to be a fairly small number of folks. When Cardinal Levada was asked this question at a Vatican briefing earlier in the week, he said that there were 20 or 30 Anglican bishops in various parts of the world who had put out feelers, but of course putting out feelers is different than signing on the bottom line. And at the grassroots the expectation is that at least in the early stages you’re talking about fairly small pockets of people who will be coming over.

LAWTON: And especially, well, here in the United States, the people that are unhappy with the Episcopal Church, which is the US branch of the Anglican Communion—they come from two different wings of the church. One certainly are those who are more Catholic in their traditions and their style of worship, but there are also evangelicals, who are conservative theologically but not so comfortable with the idea of Rome and the pope, and those two groups here in the US have come together. They’ve formed their own structure, the Anglican Church of North America, and they’re really focusing on building that. So I think a lot of the traditionalist Anglicans here in the US may not immediately head to the Catholic Church.

ABERNETHY: But is there a possibility that out of this, Kim, will come a more conservative Catholic Church and a more liberal Anglican Communion? 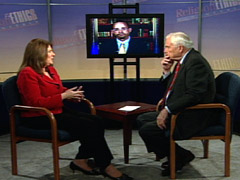 ABERNETHY: John, what about the effect on the Catholic Church of having more Anglicans in it, and especially with regard to married priests? I mean, is it a step, inevitably, toward a change in that position? If you let in a lot of married Anglicans, don’t you then have to change your position about existing Catholic priests?

ALLEN: Well, that’s certainly an argument some people are going to make. I mean, what we know for right now is the Vatican has clearly said that current Anglican ministers who become Catholics and become ordained as Catholic priests, if they’re currently married can remain married. The Vatican has also clearly ruled out married bishops. But what the policy is going to be going forward we don’t know. I mean, we should say that while the Vatican has made this announcement, they haven’t yet given us the legal document that provides all the fine points, and this is certainly one of those fine points people will have their eyeballs on. What Vatican officials are saying on background is that, whatever happens, they want to make sure that this doesn’t become a loophole that in the short term erodes the broader discipline of priestly celibacy in the Catholic Church.

LAWTON: Well, certainly Christianity is realigning in many ways around the world, and you’re finding people grouping together in new and different ways than they had in the past.

ABERNETHY: John, what do you see?

ALLEN: Well, I think in many ways ideology has replaced theology as the thing that drives Christian behavior at the grassroots. I mean, in the old days it was debates over things like the authority of the pope versus the Bible. These days it tends to be where do you stand on the culture wars, and that in many ways is what’s in play here.

LAWTON: Although a lot of the traditionalists would say those are theological issues, too.