JANE STROM: Do you know how old you are?

JANE STROM: How old are you?

LUCKY SEVERSON (Contributing Correspondent): Not long ago, Dr. Joel Strom and his wife, Jane, were so convinced that Jane’s father was close to death, notwithstanding the attention he was receiving from ten specialists, they put him in a hospice, and then he got better. 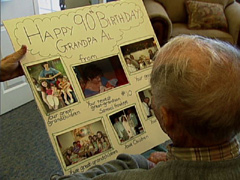 DR. JOEL STROM (Cardiologist and Professor, University of South Florida Medical School): Part of it was that he had one person who took care of him. They cut out all the referrals because they didn’t expect him to live long, and they cut out all the medicines.

SEVERSON: Dr. Strom is a cardiologist and a professor at the University of South Florida Medical School. Like every doctor we spoke with, Strom is fed up with the health care system.

SEVERSON: If Medicare costs are any measure, Miami-Dade County should have the best senior care in the country. The federal health program spends over $16,000 a year per patient. That’s about double the 2006 national average. Brian Keeley is the CEO of Baptist Health South Florida, the largest nonprofit health care system in that part of the state. He says huge Medicare costs do not translate to better health care.

BRIAN KEELEY (CEO, Baptist Health South Florida): We know that more can be injurious to people, and more health care services, more aggressively providing those services, can result in lower levels of care.

SEVERSON: He says there are several factors that bloat health care costs in the Miami area.

KEELEY: There’s a huge imbalance between the number of specialists and primary care physicians, and we have such a high percentage of specialists down over here, they utilize resources more, technology more.

SEVERSON: Dr. Strom, a specialist himself, says one reason there is such a shortage of primary care physicians is that Medicare doesn’t reimburse them enough for patient visits.

DR. STROM: If you spend a lot of time with a patient you will starve to death as a physician because you will only get paid for a certain amount of time. In fact, a lot of physicians will actually steer patients to their offices to have tests performed, because they collect both the professional component, and if they own the equipment, the technical component. 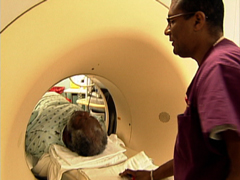 SEVERSON: Dr. Gloria Weinberg is a geriatrician and chair of the department of medicine at Mount Sinai Hospital in Miami Beach. She says when young doctors, fresh out of medical school and burdened with school loans, discover how much less a primary physician earns, they choose a specialty where they can make more money.

DR. GLORIA WEINBERG (Geriatrician and Chair, Department of Medicine, Mount Sinai Medical Center): If you look at the reimbursement, you are going to come away after paying expenses, if you are lucky, with $40 or $50 an hour. That’s not going to help the youngsters go into a field of medicine and pay off loans and do everything else that needs to be done.

SEVERSON: Here in Miami, a typical senior citizen will see a doctor 106 times during the last 2 years of their lives. Not just one doctor, several—specialists who will then prescribe a battery of expensive tests and procedures: MRIs, ultrasounds, CAT scans, and an astonishing assortment of drugs. It’s because that’s the kind of care patients around here often demand. Dr. Weinberg:

DR. WEINBERG: Patients are very sophisticated. They come, and they say, “I have a headache.” You take a headache history. They are not satisfied if you say, “You don’t need a scan.” They want a scan. If you are pushed, and you are suspicious enough, and perhaps you suggest a CT, which is less expensive than an MR, some of them will come to you and say, “I want an MR. I hear it’s more sensitive.” We have had patients in our center tell us, “If you don’t do what I’m asking I’m going to sue you.”

SEVERSON: The threat of lawsuits forces many doctors to practice defensive medicine, ordering more tests and procedures to protect themselves from being sued. Health care professionals here cited malpractice suits as another factor behind spiraling costs, and Medicare fraud in South Florida, particularly in the home health care industry, has been described as rampant.

KEELEY: The Miami Herald reported about a month ago that the FBI and CMS [Centers for Medicare & Medicaid Services] indicated that fraud was about $2.5 billion per year in Miami-Dade County. That, in and of itself, is a huge, huge difference, comparing our cost structure to the rest of the country. 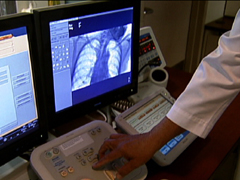 SEVERSON: About 50 million Americans are uninsured, and that includes 30 percent of the population around Miami. Many of that number are undocumented and in the US illegally. Whatever their status, most who need care end up in a hospital emergency room where, by law, they cannot be refused treatment.

DR. WEINBERG: It’s our ethical responsibility to treat that patient as we would any other. That patient can go down the path of having a cardiac catheterization, ultimately having a pacemaker, a defibrillator at $30,000, ongoing medical care, and then we face the problem, when we discharge the patient, where does the patient get the follow-up care, and the hospital doesn’t get reimbursed for it.

SEVERSON: Perhaps the biggest chunk of Medicare expenditures, something like 30 percent, goes to end-of-life care for aging Americans. Professor Anita Cava directs the University of Miami business ethics program. She says Americans need to rethink the way we look at end-of-life medical care.

PROFESSOR ANITA CAVA (Director, University of Miami Business Ethics Program): I think we in the United States really need to reconsider our relationship with end of life and to realize it’s a natural process and that perhaps ending life in a more humane and comfortable way at home with family, rather than trying to prolong it for another day or week or month, is perhaps the best way to go.

SEVERSON: Joe Gasperovich would take exception to the ethical argument for withholding expensive medical treatment for aging, failing Americans. He was born in 1919 and would prefer to prolong his life as long as possible.

SEVERSON (speaking to Joe Gasperovich): If they say we need to go do a $1,000 CAT scan, is there a point, an age you reach where you should say no, I’ve lived 90 years?

MR. GASPEROVICH: No, I want more.

SEVERSON: Dr. Weinberg says the decisions about the ethics of distributive justice for society as a whole are often much more difficult when the doctor is meeting with a patient one-on-one. 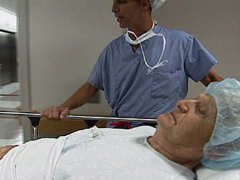 DR. WEINBERG: The health care dollars, an inordinate amount, go to taking care of people in the last 6 months of their lives. But how do you know when those last 6 months are? You have a person who has worked all their life, paid taxes, done very well, and now they are 80, and they have a heart attack. That may be the person who lives 10 or 15 more years. Are we going to say no just because of age? That’s a very, very slippery slope.

SEVERSON: There is a huge ethical discussion about who should make these end-of-life decisions—the patient, the family, doctors, the government? Brian Keeley says some decisions are easier to make. For instance, Medicare should only reimburse for treatments and drugs that are known to work.

SEVERSON: Dr. Weinberg says too many patients receive expensive treatments and surgery in their final years that very likely won’t prolong their life.

DR. WEINBERG: So if you have an Alzheimer patient who, your own belief may be, it’s time to let this person go naturally, and the family is telling you, “I’m the surrogate, and I’m insisting that a feeding tube be put in,” you cannot make the decision not to put the feeding tube on your own, even though you think it’s futile care, at least in the state of Florida.

SEVERSON: Dr. Weinberg says her 95- year-old mother has a living will that stipulates she will not be kept alive on a ventilator. Brian Keeley says preparing for end of life is not something that’s culturally accepted in South Florida.

KEELEY: Other parts of the country where people plan for end-of-life care, with the use of hospices and palliative care and what have you—down here there’s less usage for that, so people go to die in the hospitals.