KIM LAWTON, anchor: The Obama Administration launched a new initiative this week encouraging Americans to help fight hunger in their communities. The campaign is called  “United We Serve: Feed a Neighbor.” It urges people to donate money to local soup kitchens and food banks and also to volunteer their time and talents. The effort comes amid new government reports that hunger is on the rise in the US. Forty-nine million Americans struggled to put food on the table this past year—that’s an increase of 13 million—and a record number of Americans, 36 million, now receive food stamp assistance.

Joining me with more on all of this is Candy Hill, a senior vice president at Catholic Charities USA. Candy, it seems like this time of year, every year, we hear appeals from groups saying “Oh people are hungry, you need to give.” What makes this year different?

CANDY HILL, Catholic Charities: Well, we certainly are seeing such an increase, and new people that have never come to Catholic Charities for services before. Some of them are even our donors, and some of them are our former board members, so we see a real crisis in the number of people coming and who need assistance this year over the other years that we’ve been in business.

LAWTON: And there’s been some talk of food insecurity, I mean we’re not talking about starving in the streets, but we’re talking about people who are just having a harder time feeding their families? 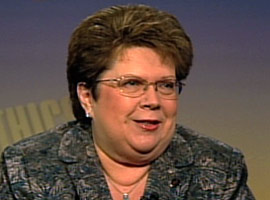 HILL: Yes, and I think when we talk about food insecurity we’re really talking about people not having food for three meals a day, so we find parents who are scrimping or not having a meal themselves in order to feed their children, and seniors who are making choices between whether they buy medicine or feed themselves, and in a country as great as this country we shouldn’t have people doing that.

LAWTON: And this is a function of the economy and all of the repercussions of that?

HILL: I think this is a perfect storm. We see the economy, and the people that we serve certainly were struggling before the collapse of Wall Street, but they were struggling first and will be the last to recover in this recovery.

LAWTON: And to what extent is it difficult in these tough economic times to make appeals for groups like yours, to say to people, give money to hungry people when individuals might be thinking, you know, I don’t know how I’m going to feed my own family?

LAWTON: Well, speaking of the government’s role, the U.S. government is urging people to give more in this new initiative, but is that enough? I mean, is it enough for individuals to give $20, a $100 or whatever, or do we need systematic changes in policy?

HILL: Well, I think long term we need systematic changes, but you know that’s a long term strategy and right now we have a short term problem, and so we need people to give and we also need the government to step up and do its part as well.

LAWTON: Are you pleased that the administration is having this initiative?

HILL: Absolutely, because I think it brings, it highlights always when the administration speaks on something and gives information, it helps connect to the things that we’re doing on the ground, and so this initiative, certainly, I think will highlight the need, but also the really creative things that are happening across America to try and meet the needs of individual people.

LAWTON: Yours is a faith-based organization. A lot of groups are trying to help the hungry. What is the specific role for religious groups and those from the faith community?

HILL: Well certainly we have a 2,000-year tradition that we’re supposed to feed the hungry and we take that very seriously and so we’ve been doing this for decades across the country and we see it as a moral issue, that people shouldn’t have to go hungry in a country as rich as ours, and we’re going to continue to try and meet the needs of people in local communities across this nation.

HILL: I absolutely believe it, and certainly the government is calling on that and Congress is as well. We have to think creatively. We have to think about 21st century solutions to 21st century problems, and the safety net in this country is badly torn and weakened, and we need to not just fix it. A repair is not sufficient. We really need to think about how do we eliminate the need for programs like food stamps, and like donations to feed the hungry through a food bank or a soup kitchen, and if we have the political will to do it in this country we can change this. You know, Bobby Kennedy forty years ago called attention in the Mississippi Delta to children being hungry, and yet today you and I are sitting here having the same conversation four decades later. We just need to rise to the occasion and have the political will to change it.

LAWTON: All right, Candy Hill, thank you very much.

HILL: Thank you as well.