KIM LAWTON:  Grammy-nominated Gospel singer Wintley Phipps is a familiar voice at big national events. At President Barack Obama’s National Prayer Service following his Inauguration, Phipps’s rendition of “Amazing Grace” brought the entire National Cathedral audience, including the new president and first lady, to their feet. But he says it’s just as meaningful to him when he sings in places like prisons.

Pastor  PHIPPS: There is a sense that you’re giving hope to people who really need it.

LAWTON:  For Phipps, who is also a Seventh-day Adventist pastor, music is a ministry and, he says, one of the deepest expressions of his Christian faith. 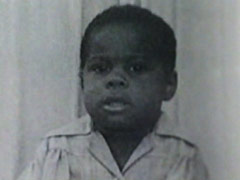 Pastor PHIPPS: Music is almost to me an echo of the sounds of the divine world, and when you hear these sounds, it stirs something deeply spiritual within you.  Music also is the most powerful way of impressing the human mind with hope.

LAWTON: Hope has been a hallmark not only of Phipps’s musical career, but in his charitable efforts as well.  In 1998, Phipps founded the Dream Academy, a national nonprofit for at-risk kids. Born in Trinidad, he says hope was crucial in overcoming his own at-risk childhood.

Pastor PHIPPS: I was born to a troubled home, and I used to get away from my parents’ troubles — I had a little red tricycle, and I’d go in the back yard of my house, and I would turn the tricycle on its side and use one of the backside wheels as a steering wheel, and I would sit there for hours, and I would dream that I was flying to faraway places in the world and meeting important people when I was six, seven years old, and then I wanted to be like Tom Jones.  I’d go around the house singing, “It’s not unusual to be loved.”  I just wanted to be Tom. But something was missing to me.

LAWTON: Despite a difficult family life, Phipps says his mother always prayed for him and told him that God had a special plan for his life.  As a teenager, Phipps embraced her faith as his own.

Pastor PHIPPS:  At the age of 16, God walked into my life and said, “I’ve seen your dreams. Give me your dreams, and I’ll let you see what I’ve been dreaming for you.”

LAWTON:  He attended an historically black Seventh-day Adventist college in Alabama, where he met Linda, now his wife of 32 years.  Then, Phipps says, God began providing opportunities for him to sing in national venues such as a 1984 appearance on “Saturday Night Live” with Jesse Jackson.  He came to the attention of Billy Graham’s team and became a frequent performer at the evangelist’s crusades.

Pastor PHIPPS (singing in Washington): “Talk about a child that do love Jesus.”

LAWTON: Phipps also became a favorite in Washington. He’s sung for every president since Ronald Reagan.

Pastor PHIPPS: I’ve never had a manager or never had an agent, and yet some of the most wonderful moments that a singer could ever dream of have happened to me, and I believe it’s providential.

LAWTON: The idea for the Dream Academy came after he got involved with a prison ministry.

Pastor PHIPPS: I did not know that so many young men in prison looked like my sons, and when I saw it I was shaken. One of every three young black men in America between the ages of 18 and 30 are in prison today or supervised by the court system either on probation or parole.

LAWTON: Phipps then learned that 60 percent of the young people who end up in prison are the children of prisoners. He wanted to break the cycle of intergenerational incarceration. The Dream Academy offers after-school mentoring and interactive academic tutoring to children of prisoners and kids falling behind at school. 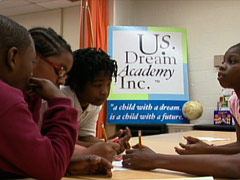 Pastor PHIPPS: One of the most exciting things that can ever happen in a child’s life is to know that , “You mean God thinks about me?  Or God dreams about me?”  And he’s got a dream for my life?”  And when you catch a little glimpse of what that dream is, wow, it changes everything.

LAWTON:  Phipps has enlisted the support of some of his famous connections for the project.  One of his biggest benefactors is his longtime friend Oprah Winfrey.  The lesson of faith, he says, is that things aren’t always as they seem and that hardship can be overcome.  In these uncertain economic times, he’s released a new music DVD called “No Need to Fear.”

LAWTON:  It’s a theme he finds throughout the old spirituals that he often performs.

The Negro spiritual teaches us that you’re going come up rough sides of mountains, and you’re going to have difficulties.  But faith gives you that ability to weather any storm.

(singing): “I looked over Jordan and what did I see?”

LAWTON:  It’s the core theme as well for the song that has become his signature, “Amazing Grace.”  He finds great spiritual lessons in the history of the song.

Pastor PHIPPS:  A lot of people don’t realize that just about all Negro spirituals are written on the black notes of the piano, and they just keep recurring.  Probably the most famous white spiritual that’s built on this slave scale was written by a man by the name of John Newton who, before he became a Christian, used to be the captain of a slave ship and many believe heard this melody that sounds very much like a West African sorrow chant (hums “Amazing Grace”).  And it has a haunting, haunting, plaintive quality to it that reaches past your arrogance, past your pride, and it speaks to that part of you that’s in bondage, and we feel it. We feel it. It’s just one of the most amazing melodies in all of human history.