LUCKY SEVERSON, correspondent: Halftime show at the homecoming for Anacostia High School, a big time for any high school kid. But something was missing here: parents. The school has more than 900 students, but only a few of the mothers showed up, and there was hardly a father to be seen. Listen to the personal resumes of some of the students and former students.

JACOB JOHNSON: When I was eight years old I joined a gang, and I’ve been in a gang ever since, and I‘ve done things that have threatened my life and other’s lives, you know what I’m saying?

SEVERSON: What kind of trouble were you getting into?

AYANA SMITH: All the females in my family got pregnant really young. Thirteen, fourteen, twelve. 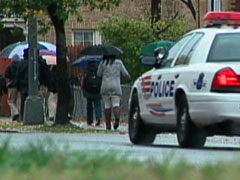 SEVERSON: In fact, one girl in nine will get pregnant while attending Anacostia High School. Less than half the freshman class will graduate. Drugs and violence. Broken families.

SEVERSON: La Wonda Harris knows. She spends most of her working days in the neighborhood.

HARRIS: When you have young people, and you say, you know, what do you want to be when you grow up? Some of them just look at you like why would you ask me that question? Why would I dream when I’m either probably going to end up dying or I could end up in jail?

SEVERSON: But in this neighborhood something different has been happening. Ten years ago Steve Fitzhugh and Rickey Bolden, both of whom played in the National Football League, helped raise enough money to buy this former crack house at 17th and Q Streets.

STEVE FITZHUGH: When we began The House we needed The House to be a place that was a refuge. It was a safe place, a safe haven for students to come after school.

SEVERSON: During the drug wars in Washington in the late eighties, bodies were dumped along this railroad track a block away, so many bodies the police called it Murder Row. That crack house, now known simply as The House, has expanded. This building next door was donated and is now the youth center. The doors open as soon as school lets out. For lots of teenagers from any neighborhood music is the center of their lives. Here, they can make music and record it in this state-of-the-art studio.

FITZHUGH: So many of our students have what I call pain on top of pain. They don’t have a chance to unpack that pain, and we give them a chance to do that through the recording studio. Now they’re writing a song. They’re writing poetry. They’re singing about it. And then their heart becomes fertile ground for us to begin to get to the core of some of their hurts. 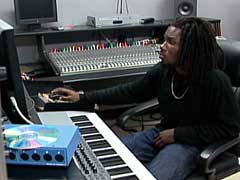 SEVERSON: Jacob Johnson, who’s been a gang member most of his life, now wants a career in music. He’s looking for a way to get out of Anacostia.

JACOB JOHNSON: You’ve got to look at your surroundings, you know what I’m saying? Everybody that’s in the neighborhood basically focuses on doing neighborhood things. Everybody wants to follow the crowd. You can’t do too much of anything if you’re just being like everybody else. You know, being out on the street smoking, drinking, robbing people. That’s what differentiates certain Anacostia students. But me, I got plans.

SEVERSON: The annual budget for the house is about $700,000. Most of it comes from private donations, nothing from the federal government. The House has 90 kids this year. It provides them with things to do that they can’t do anywhere else in Anacostia.

HARRIS: These kids come in here and we have games and we just start hanging out, we start playing video games with them, we play pool with them, we hang out with them in the studio, and we build a relationship, and they start to trust us.

SEVERSON: It’s more than a place where kids can go after school. It’s more than a place where they can find adult role models. The House offers a faith-based message that says you’re life matters, and we care. The staff and volunteers are required to be born-again Christians. But they are very careful not to force religion on the kids, many of whom have a skeptical view of God and church.

FITZHUGH: There are a lot of students who would love to live a righteous lifestyle. But they don’t necessarily want to be like the church people they understand religious people to be, and a lot of these students have been victims, have become victims of adult failure in their lives, so we try as a staff, as a team not to beat them over the head with the Bible. 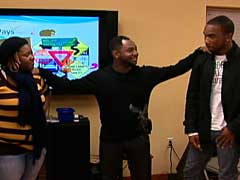 SEVERSON: One afternoon a week the kids are given what’s called a Life Session. It’s a religious, moral message delivered in their language.

LIFE LESSON LEADER: So Jada is interested in Calvin, and she wants to, you know, do the do with him…

SEVERSON: But the broader idea is not to follow the crowd, to see the difference between right and wrong.

LIFE SESSION LEADER: How do you know the difference when all you see around you is a bunch of people coming up doing the same stuff? How do you know the difference when you see your Mom’s having a hard day at work, and she come home and she crack and crush a whole six-pack by herself? How do you see a different way when you see your cousin and all he’s talking about is how he’s a bigger man because he smashed off another one? But this is what Jesus said. Jesus said I am the way, he said, and the truth and the life.

FITZHUGH: There was one student, and the first time I saw him was the first time ever I said, oh God, don’t let this guy come to The House. I just didn’t want this guy to come to The House. Fast forwards three years. The same guy graduates last year with a 3.6 grade point average, and he was one of our baptism candidates, he was one of our students, he even played Jesus at the Easter play.

SEVERSON: The kids aren’t required to attend these Life Sessions, but if they do they get points, and points lead to field trips which are important, because the world for most of these kids does not extend far beyond the few square miles of Anacostia.

JADA WALKER: When I first came here I thought it would be just like a little rec center, everybody just come here and play games, stuff like that. But when they started doing the Life Sessions, and the retreats we go on, I been thinking like, well, dang, maybe I should change my life.

SEVERSON: The House doesn’t provide an academic program, but it’s a place for kids to do their homework, and La Wonda Harris says The House’s faith message gives them a purpose, a reason to stay in school. 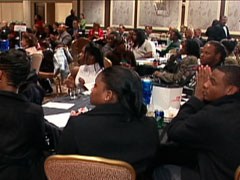 SPIRES: All my life, the only person that was there that genuinely cared was my mother and my brothers, you know, I didn’t—I never felt like anybody else cared ’til I came to The House.

WALKER: They helped me out and stuff, for right now I could’ve been dropped out of school, pregnant, or something like that. But coming to The House really made me like a better person.

SPIRES: I want the people that were in the same or similar situations as mine to look at me and hear the things that I say and realize that I was right there in their shoes, and there’s hope in the unseen.

SEVERSON: The House recently celebrated its tenth anniversary, and it had something to celebrate.

SEVERSON: Of the fifteen high school seniors who participated at The House last year, nine have gone on to college. The year before, there were ten.

FITZHUGH (speaking at anniversary event): I don’t normally get this kind of emotional, but I had a flood of hundreds and hundreds of young faces that have come through The House, and if it had not been for 17th and Q, a number of those young people never would have made it.

My time with [the] Denver [Broncos] was pretty limited. I tell people all the time the NFL stands for Not For Long. But it was a great experience. But nothing can compare to a young man or a young woman who has a new lease on life. I told someone that’s my Super Bowl.

SEVERSON: And every Thursday afternoon at The House, a message of hope for the kids of Anacostia, this dangerous corner of Washington known as Southeast.

LIFE SESSION LEADERS: I promise you, I promise you, if you commit to taking your walk to another level, I promise you your lifestyle, the life you live will get better. We can live a better life. God has blessed me, man, but guess what? God said, one, that’s not enough. I want you to go to Southeast, and I want you to help somebody else the way I helped you. Then they’re going to live life to the full. Their parents will, their children will, their grandchildren will, too, and Southeast’s going to look a lot better, not because Southeast has changed, but because you have changed. So let’s bow our heads…

SEVERSON: The House closes its doors each night at 7:30. After that, the kids will be back on the streets at risk. But over the years, hundreds of kids have gone through this place better prepared to beat the odds.