BOB ABERNETHY, host: The world is mobilizing to respond to Haiti’s needs after its devastating earthquake. President Obama pledged a $100 million US effort in aid and recovery:

Faith-based groups across the spectrum organized to raise money and send in supplies.  Many religious agencies already had humanitarian teams on the ground and were trying to coordinate rescue efforts and emergency medical help.  Churches and church-run hospitals, schools, and orphanages are among the buildings that are now rubble. Many US religious groups are still trying to locate staff, missionaries, and short-term workers. Among the confirmed dead, the Roman Catholic Archbishop of Port-au-Prince, Joseph Mioht.

Here in the US, there have been many special prayer services and vigils for the victims. Pastors and spiritual counselors tried to offer comfort to grieving Haitian Americans.  Several religious groups are working to bring injured and displaced Haitians here. The vast majority of Haiti’s population is Christian.

Because of the many Haitians in the US and Haiti’s proximity to the US, and because of the overwhelming needs, all over this country there are people with personal connections to the tragedy. Kim Lawton, our managing editor, has grandparents who were missionaries in Haiti and parents who did short-term mission work there. 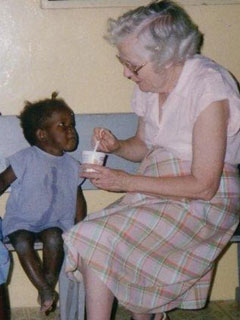 KIM LAWTON, managing editor: My grandparents spent a large part of their retirement years working in Haiti as missionaries. They helped found a mission called the Haiti Gospel Mission. They built schools and churches, worked on agricultural projects, dug clean water wells, and helped set up a medical clinic, and this has been a really difficult week for them. My grandparents — they’re in their 90s now, they live in western New York –they’ve been trying to watch this unfold on TV, and just to see this place that they poured so much of their own time and money and love into, and just to see that in ruins has been very difficult. My grandmother told me she can’t sleep at night because she’s been so worried about the people she knows down there — missionaries, Haitians.

ABERNETHY: Could they get through to anybody?

LAWTON: Well, a lot of this week was spent trying to, indeed, make contact with some people. They were able to make contact. We, our family was able to  with missionaries who live in the house that my grandparents helped build. It’s about 15 miles outside of Port-au-Prince, and they say the medical clinic there has been overwhelmed by injured people from Port-au-Prince, as well as the surrounding area, making their way to them. They’re running low on medicines. They’re running low on fuel, and they’re uncertain about the future. My parents were short-term missionaries with the Free Methodist Church, and they stayed on the Free Methodist compound in Port-au-Prince at a guest house. This week we heard that the guest house has collapsed, and it appears that several missionaries, American missionaries, were lost, as well as many Haitian workers.

ABERNETHY: And what was going on in your family is replicated in thousands, many, many thousands of other families all over the country.

LAWTON: Well, exactly, and that really struck me this week as I’ve been talking with people. You have Haitian Americans so worried about their own families and homes and people back in Haiti, and you have so many people in the religious community here — many churches, but other non-Christian groups as well, have gone down there. I think Haiti’s one of the top destinations for short-term humanitarian and missionary work precisely because of all the needs there, so you have so many people. I heard stories of short-term teams from across the country who are in Haiti or  just there or just back from there. I’ve been there, you know. I was there as a kid with my grandparents, as an adult, and I think that when you have that personal connection, you’ve been there, you know people there, this tragedy is no longer just a TV story, you know, sad faces on TV. It’s people you know, you may have helped, or places you’ve been.

ABERNETHY: And all those personal connections are probably behind the enormous amount of money that has been raised very quickly for relief.

LAWTON: Exactly. I’m sure that’s part of it. So many people really do have a real concern about what’s going on down there. Of course, the problem is what to do with the money, because logistics are so bad. Things are in such chaos.

ABERNETHY: And in spite of all that you do read and hear that some people are talking about the long-term future as being one that can be fairly bright, perhaps as a result of having to start all over again.