KIM LAWTON, correspondent: Humanitarian groups have been rushing to get desperately-needed supplies into Nepal, but it hasn’t been easy.

KENT HILL (World Vision U.S.): There's one runway in Katmandu and even just a few weeks before the earthquake, that had been shut down because of a Lufthansa flight had gone off the runway. Can you imagine all of these relief supplies trying to get in to Katmandu? The roads from India are there, but they’re clogged and so getting the supplies in has been a major logistical headache.

LAWTON: Kent Hill leads international programs for World Vision U.S., one of the largest Christian humanitarian organizations. Hill was in Nepal less than two months ago for discussions about how relief groups could be better prepared in this earthquake-prone region. 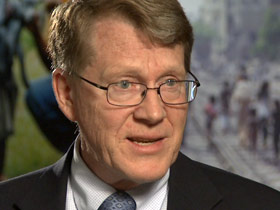 HILL: I came back exceptionally concerned. I just didn’t think it would hit this fast.

LAWTON: World Vision already had 200 staff in Nepal and the group has sent in 50 emergency experts.

HILL: Over half the population was already considered poor, living on $2 a day. It means that already there were big child exploitation problems, trafficking in persons, child labor, early marriage. The children were already in trouble. And in any kind of disaster like this, the pressure for the problems to grow worse on children grows tremendously. 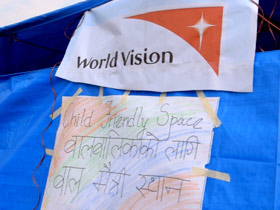 HILL: To give some regularity and routine to their lives again, a place they can color and play, where counselors are in case they’ve lost their parents or loved ones.

LAWTON: The next few weeks will be key as the region prepares for monsoon season. Emergency officials warn that thousands more people could die because of infrastructure problems caused by the earthquakes.

HILL: Anytime the water supply is disrupted, you’ve got the possibility of cholera. You’ve got other water-borne diseases. That can hurt. We’ve got probably several million people who don’t have access to food now like they did before. And remember Nepal already was prone not just to earthquakes, but to floods and to drought. So you’ve got a food problem you’ve got a water problem, you’ve got a health problem.

LAWTON: Even as they are distributing immediate aid, Hill says his people are also working on more permanent solutions.

HILL: You have to be thinking now, what do you do to mobilize those resources, to get the economy going again. 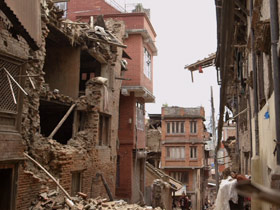 LAWTON: He says workers on the ground must decide how best to allocate limited resources.

HILL: They have to make immediate decisions about where do you put your effort. The resources flow in, but what are you going to do? And what are you going to do if you don’t have the resources you need right now? So these folks are some of our most creative and innovative people working in the humanitarian organizations, the ones who say I don’t have everything I want. What do I do in these circumstances?

LAWTON: And those are tough decisions. 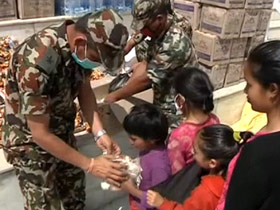 HILL: They’re very tough. I mean, you’re surrounded by people with their hands out and they’re desperate and to turn somebody down who may not be in a life-threatening situation to get somebody who is can create tension. You have to handle that diplomatically. No, it takes a lot of work and it takes a lot of expertise and a lot of people aren’t really cut out for this kind of pressure.

LAWTON: The Nepal disaster comes as resources at World Vision and many other humanitarian groups are already stretched thin dealing with other crises around the world, such as the flood of refugees and internally-displaced persons, IDPs, in the Middle East and Africa.

HILL: We may have three million people displaced by what happened in Nepal, but do you know, in the last three or four years, we have well over 12 million, half the population of Syria, have been displaced. There are over 50 million refugees and IDPs in the world today. That is the most since World War Two.

LAWTON: Hill admits the enormity of the needs can be overwhelming.

HILL: The only way you get through that, what I call the temptation to despair, is to not think of a million or 12 million or 50 million people in need. It’s to think about that one person, that one child. And once you’ve had any contact with one person whose life has been transformed, or saved, or preserved from disease, once you’ve seen one life change, you say it is worth it.

It’s nearly a month since Nepal was rocked by the first of two earthquakes, and humanitarian and faith-based groups like World Vision continue to be faced with major challenges, including severely damaged infrastructure, cold temperatures, and the possibility of disease, flooding, and even more earthquakes. Another important concern is deciding how to allocate limited resources to help thousands of victims. “You’re surrounded by people with their hands out, and they’re desperate, and to turn somebody down who may not be in a life-threatening situation to get somebody who is can create tension. You have to handle that diplomatically,” says Kent Hill of World Vision US.