KIM LAWTON, correspondent: Activists from both sides were out in full force Monday as the Supreme Court handed down its decision. The ruling was a victory for the evangelical Green family, which owns the Hobby Lobby craft store chain, and the Mennonite Hahn family, which owns Conestoga Wood Specialties. Both objected to providing certain kinds of contraceptives, which they consider tantamount to abortion. In the ruling, the majority of Justices agreed that “closely-held” corporations controlled by a small group of people can claim religious freedom rights under the 1993 Religious Freedom Restoration Act.

LORI WINDHAM (The Becket Fund for Religious Liberty, at news conf.): The Court ruled that families do not lose their religious freedom when they open a family business. This decision does not grant religious protections to large, publicly traded corporations. The Court kept the focus where it belonged, on families like the Greens and the Hahns, and on everyday Americans who seek to live out their faith.

LAWTON: Faith-based groups which have been rallying around the issue of religious freedom were elated. 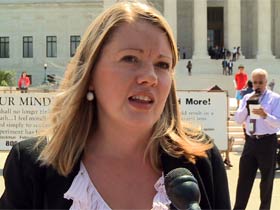 ASHLEY MCGUIRE (The Catholic Association): Just because you're an employer doesn't mean you have to pay essentially fines or comply with something that violates your most deeply held beliefs. That doesn't mean that you're trying to deny anybody anything, but I think that that's our first freedom. The founders considered it our first freedom and for people of faith to feel like they can live in a diverse and pluralistic society and be respected for who they are, this is a huge victory.

LAWTON: But not all in the faith community considered it a victory. Rev. Harry Knox is president of the Religious Coalition for Reproductive Choice.

REV. HARRY KNOX (Religious Coalition for Reproductive Choice): It’s an insult, really, to those of us who are part of religious communities and worship and pray and study together every week, to have a corporation be called a religious organization.

KNOX: People like cashiers in the very stores that brought this case are having a hard time feeding their families, educating their children, and keeping the roof over their heads, and so for them, the healthcare that would have been afforded them through the Affordable Care Act, was vital, and they will lose that in the short run.

LAWTON: The majority opinion stressed that the ruling applies only to the contraception mandate, and not necessarily to religious objections to covering other practices such as blood transfusions and vaccinations. Still, in a sharply-worded dissent, Justice Ruth Bader Ginsburg warned that in the wake of the ruling, new religious freedom claims “will proliferate.” 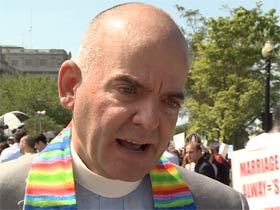 REV. BARRY LYNN (Americans United for Separation of Church and State): I do believe that more corporations, starting with closely-held corporations, will now try to get into court, making an argument that some allegedly deeply held religious belief does no longer require them to obey other federal laws.

LAWTON: Supporters of the decision believe those concerns are overblown, arguing that this ruling was narrow and balanced.

CHARMAINE CROUSE YOEST (Americans United for Life): This is really a decision that reflects common sense and a lot of times you don't win on common sense, but this one really was.

LAWTON: Meanwhile, analysts are debating the impact of this ruling on what is expected to be the next wave of cases in the pipeline, more than 50 lawsuits filed by faith-based non-profits who claim the contraception mandate doesn’t adequately accommodate their religious beliefs.

BOB ABERNETHY: We want to discuss all this now with Kim Lawton, of this program, along with Kevin Eckstrom, the Editor-in-Chief of Religion News Service. Welcome to you both. So Kim, a lot more to come, huh?

KIM LAWTON: Exactly. A lot more cases on all of this. The Obama administration exempted houses of worship from having to comply with this contraception mandate, but there are a lot of faith-based non-profits, Catholic hospitals, evangelical universities, even some religious orders, like the Little Sisters of the Poor, archdiocese and Catholic diocese, they were not exempted. The administration tried to craft some kind of an accommodation so that those groups wouldn’t have to directly pay for things that they say violate their religious beliefs. These- a lot of these groups say that accommodation wasn’t good enough. It still entangled them too much. Those cases are still in the courts. And the question is: What in this decision might signal what will happen with those cases? And people are looking at it and seeing it both ways. Some say, “Oh the justices said they want to see an accommodation so that should be okay.” And others say, “No, this Hobby Lobby decision will help those groups.” That’s still an open question.

ABERNETHY: And also there’s this whole idea of being able to discriminate, Kevin. 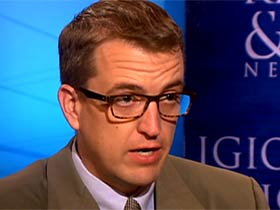 KEVIN ECKSTROM: Yeah, so all–a lot of people in Washington now are–have their eyes on the White House where the Obama administration has said that they’re going to issue an executive order banning discrimination against gays and lesbians for federal contractors. So that’s not just federal employees, but that’s groups like adoption agencies and social services agencies, and even relief groups that do work with the government. And the question is going to be is, how big of a religious exemption is there going to be, or if there is even going to be one in this new order. So would a church that runs a soup kitchen funded by the government, say, be able to hire and fire based on sexual orientation under this new order? And that’s not clear, and the message from the court seems to be as long as there’s an exemption for your religious belief, that’s okay. And now the question is: How large of an exemption will there be?

ABERNETHY: And-and don’t the- don’t the employees come in here too and if they want to say, “I have rights, too, and I don’t want to have my employer impose his religious beliefs on me?”

ECKSTROM: Right, and that’s a question that really didn’t get addressed by this decision. You’re- ultimately I think the court will have to sort of decide where one person’s freedom ends and another person’s begins on something like this. But it does point to this larger question that we have about, you know, should religious groups or religious people or institutions be treated differently under the law than everybody else, and what the court is saying here is, “Yes.” You know, if you have a religious claim, you, you know, a different set of rules can apply to you. And so, on issues of hiring and firing, and of, you know, contraception, and receiving federal money, all of those questions, you know, are- are out there. And they will be addressed by the court. I think this decision will color those decisions.

LAWTON: One of the big questions is where- how far should the exemptions go, too. I mean, religion has always been treated differently in our country. Some people don’t like that that’s the case, but as the culture shifts, and so as, you know, at one time some of these groups- Catholics and Southern Baptists- were helping to pass laws banning gay marriage. Well those laws are being overturned, and so these groups are now sort of against the prevailing cultural opinion. How far should they be exempted from that idea? And I think that’s a big question that’ll be argued in the future.

ABERNETHY: Many thanks to Kim Lawton and to Kevin Eckstrom of Religion News Service.

Religious groups are deeply divided over the Supreme Court’s controversial ruling Monday (June 30) in the so-called Hobby Lobby case. In a 5-4 decision, the justices said despite a requirement in the Affordable Care Act, some for-profit corporations cannot be forced to provide contraception coverage which their owners say violates their religious beliefs. Managing Editor Kim Lawton reports on the various reactions within the faith community. Also, host Bob Abernethy talks with Lawton and Religion News Service editor-in-chief Kevin Eckstrom about wider implications of the decision.