LUCKY SEVERSON, correspondent: This war zone is not in some far off country. It’s just across the border from El Paso, Texas, in Juarez, Mexico, one of the most dangerous cities in the world.

FATHER KEVIN MULLINS (Parish of Corpus Christi): There was a 47-year-old man here with four bullets in his head, so we stopped in order to give the last rites, as they used to say.

SEVERSON: Since Mexico’s president, Felipe Calderon, declared war on the drug cartels four years ago, almost 5,000 citizens have been murdered in Juarez alone. Father Kevin Mullins knows. He’s officiated at too many funerals.

SEVERSON: Next to the statute of the Virgin Mary on a hill overlooking Juarez, there’s a cross. It’s riddled with bullet holes. No one, not even priests in the world’s second largest Catholic country, feels safe anymore.

FATHER MULLINS: When I leave in the morning and go out in the truck, once upon a time I wouldn’t think twice about it, but now because of these executions and because of the stray bullets, I’d say, “Lord, protect me, take care of me.” Then I’ll go out.

SEVERSON: The violence has spread throughout Mexico, but Juarez has been particularly hard hit because it’s a major conduit for illegal drugs passing from Mexico into the United States. It’s become a bloody battleground as cartels fighting for the huge amounts of money involved murder each other and innocent civilians.

RUBEN GARCIA (Director, Annunciation House): It is a city that has real fear, a lot of it unpredictable, a lot of it you can’t put your finger on it, but its certainly something with which people live on a daily basis.

SEVERSON: Ruben Garcia runs Annunciation House, a halfway house for indigent migrants across the border in El Paso. Some who cross over to escape the violence come here. But most, like these folks who belong to Father Mullin’s parish, are stuck in Juarez, worried first about their kids and grandkids, worried about stray bullets.

Leo says he’s heard that teachers have been threatened that their students will be hurt if the teachers don’t pay extortion money. Four of Ezikial’s extended family have been victims.

FATHER MULLINS (translating for Ezikial): So the mother and the son were killed just before Christmas outside the old US consulate, and the week before a nephew had also been executed outside the church in San Marcos.

SEVERSON: When Juan Pablo refused to use his market as a drop-off location for suspicious packages, he was told his two kids would be killed. So the family quietly and quickly moved to another city and then quietly returned. 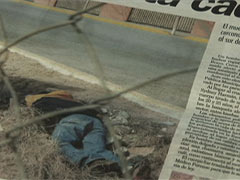 Yesterday there were 13 executions here in Juarez, the day before 19. Two of those were decapitations. Even more striking than the number of murders is the gruesome way they have been carried out. Almost every day, the one-and-a-half-million residents of Juarez are exposed to horrific news stories of unthinkable violence. A mere shooting hardly gets any attention.

FATHER MULLINS: Shooting people is always terrible, but when they dismember them or when they strangle them with barbed wire, it’s horrific, the results. Or decapitation is fairly big around here.

(speaking to Father Mullins): You’re not willing to concede?

FATHER MULLINS: Not yet, no, because I think it’s evident from the scriptures, and also from history, that the good overcomes evil.

SEVERSON: Most everyone agrees that one reason so many people are enticed by all the drug money is that so few here have jobs. Because of the violence, tourism has dried up, and more than 6,000 businesses have closed, leaving tens of thousands unemployed. For many, the only alternative is illegal and dangerous.

GARCIA: If I have no work, and I’m not eating, and my children are not eating, and along comes someone and finds a way for me to start feeding my kids, I’m going to be grateful for that person. If you come and you say, “Did you know that person is a notorious drug dealer?” I’m going to look at you and say, “You know what? My kids are eating.” 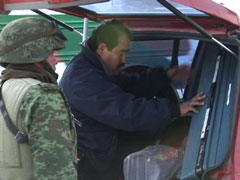 SEVERSON: One of the biggest problems in Mexico is a lack of trust in anything to do with the government—politicians, police, the army, you name it.

FATHER MULLINS: Of every 618 executions, 20 are investigated.

FATHER MULLINS: Twenty out of 618, so any talk of investigations is really a joke.

GARCIA: The corruption that is affecting Mexico is very, very pervasive. It includes most of Mexico’s institutions to a level that would probably be mind boggling to the average citizen in the United States. What would it mean for the average US citizen to wake up and to realize I cannot call my police department because I cannot trust my police?

SEVERSON: One institution that Mexican people have always had faith in is the Catholic Church, in part because almost 90 percent of the over 142 million citizens are Catholic. But even trust in the church appears to be eroding. Estellita, a mother of 10, says the church has not done enough to fight the cartels .

(speaking to Senora Estella): You mean the church has done nothing?

FATHER MULLINS: Senora Estella says the Catholic Church has been a little bit sleepy. They could have done a lot more.

GARCIA: I think the church in Mexico has been hurt by its hesitancy and its silence. Its willingness to be prophetic, to be outspoken, to speak the truth, I think, would enhance its credibility. 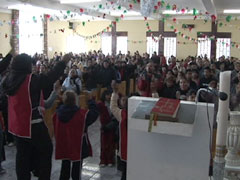 SEVERSON: Garcia and many others in Mexico feel that for the Catholic Church to speak the truth it has to confront the drug cartels head on.

FATHER MULLINS: I think maybe the bishops could be more vocal.

FATHER MULLINS: It could be dangerous, yes, but that element of danger is also part of if you want to live a Christian life then in a situation like this there could be an element, a modicum of danger from time to time.

SEVERSON: The Mexican Council of Bishops estimates that about two out of every 10 priests face serious risks for speaking against drug traffickers. One has been killed, dozens transferred for their own safety. The rest are looking over their shoulders.

FATHER MULLINS: And I got a call from one of my colleagues, a Mexican priest here, and he called up and said, “Kevin, Kevin is it you?” And I said, “Yeah, yeah it’s me.” And he said, “I’m so happy to hear your voice.” He said, “The radio said you were just assassinated in the street.” Some other priests had heard of this, and they prayed a Mass for the Dead for the dead priest, being me, on Christmas Eve, and they were pleased to see me the following week.

SEVERSON: And you were probably pleased to be there.

FATHER MULLINS: I was pleased to be there without the bullet holes, yes.

SEVERSON: After a long and conspicuous silence, in November 2009 the Mexican Bishops Conference publicly condemned narcotics traffickers and demanded that the country’s politicians crack down on corruption. The communiqué said the bishops intend to have a louder voice against the evils of illegal drug trafficking. 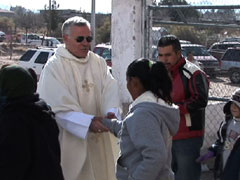 But in individual churches the battle has already begun. When Father Mullins came here nine years ago, he could only count about 30 regular churchgoers. Take a look now.

FATHER MULLINS: I never cease to be amazed at the nobility of the people around here, not that that’s a surprise, but I just think people are so brave in Juarez. It’s a privilege for me to be a priest here.

SEVERSON: One reason his parish has grown so much is because he sent what few members he had to the neighborhoods offering the church as an alternative lifestyle to the drug culture. This is Eduardo Perez.

EDUARDO EALART PEREZ: We invite many people, we go to the streets and invite people, “Hey, come to our church.”

SEVERSON: So you think you cannot win the drug war without the church?

SEVERSON: The Catholic Church has a proud tradition of standing up for people who can’t defend themselves. Father Mullins and many others here believe that now is the time for the church to stand up to the drug cartels, regardless of the risks.