LUCKY SEVERSON, correspondent: The reaction for and against the law has reverberated from Main Street through the halls of government to the sanctuaries of churches. This is Bishop Kirk Stevan Smith of the Arizona Episcopal diocese.

SEVERSON: But even among the clergy there is a divide. Religious leaders like the Reverend Tim Smith of Scottsdale, Arizona, support the law. Smith was a nondenominational pastor for 30 years, now a spiritual advisor.

REVEREND TIM SMITH: I think it’s a cry for help from the legislature, from the governor.

SEVERSON: Arizona has become ground zero for illegal immigration. It’s estimated that there are nearly 500,000 illegal residents living in Arizona and more streaming in every day. The federal government has dramatically increased the number of border agents, but not enough to stem the flow. Congress has yet to agree on a comprehensive solution. Reverend Smith says that the Arizona law only supports what was already on the books.

REV. TIM SMITH: Essentially, as I read the law and its amendments, it’s an attempt to enforce what has been a federal law since the days of, I think, FDR.

SEVERSON: Illegal immigration has long been a federal crime. The Arizona law makes it a state crime and instructs local police to check the immigration status of anyone they stop for an infraction and arrest anyone they reasonably suspect is undocumented or illegal. If citizens don’t think the police are being vigilant enough they can sue them in court. Supporters say there are enough safeguards to prevent profiling. Critics say the law makes it almost impossible not to profile.

Arizona police come down on both sides. Some say they don’t have the manpower to enforce the law. Another major issue is what is “reasonable suspicion”?

BISHOP KIRK SMITH: The wife of one of our priests who is of Mexican [descent], she was just driving through the neighborhood and was pulled over by a sheriff’s officer, asked to see her identification—which she had, she is an American citizen and has been an American citizen for 20 years—and the sheriff said to her, “If you didn’t have these paper you’d be taking a quick trip back to Mexico.” 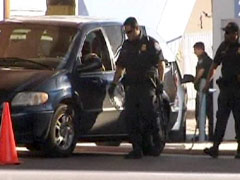 SEVERSON: Supporters of Senate Bill 1070 say its purpose is to crack down on crime, like that experienced by rancher Robert Krentz. He was interviewed in 1999.

ROBERT KRENTZ: You know, we personally been broke into once, and they took about $700 worth of stuff, and you know if they come in and ask for water I’ll still give them water. That’s just my nature.

SEVERSON: In March, Krentz was murdered. His killing spurred passage of the new law because it was suspected that he was killed by an illegal. Now there is evidence that the killer was not an immigrant. Overall, the violent crime rate in Arizona is down, and so is property crime, and census data show that immigrants are less likely to commit crimes than legal residents.

REV. RAUL TREVIZO: The legislature would say that this law is intended to stop home invasions, drugs coming across the border, guns being smuggled is absurd. In no way does this law even begin to address those issues.

SEVERSON: Father Raul Trevizo pastors a Catholic parish in Tucson, near the border, of about 4,000 families, many of them undocumented.

REV. TREVIZO: All this law does is put fear in people who are here as economic refugees trying to eke out a living and help themselves and their family back home.

SEVERSON: If it seems that many, if not most religious leaders are opposed to the law, Mark Tooley, a self-proclaimed conservative watchdog, says it’s because they have been the most vocal and, in his view, the most misleading.

MARK TOOLEY (President, Institute on Religion & Democracy): They are speaking very dogmatically to a political issue for which there is not direct guidance from the scriptures or Christian tradition, and it really is a political issue that Christians across the spectrum can disagree about.

SEVERSON: But religious opponents of the law say they are simply following the scriptures.

REV. TREVIZO: I believe the fundamental principle of the Old Testament is that we are under full obligation to follow God’s law. Jesus summarized God’s law in the great commandment: love your neighbor as yourself.

SEVERSON: United Methodist Bishop Minerva Carcano has been a vocal opponent of the law, lobbying anyone in Congress who will listen.

BISHOP MINERVA CARCANO (Desert Southwest Conference of the United Methodist Church): Scripture is full of references about the immigrant, and the message is consistent and clear. The message is we are to care for the immigrant. Leviticus says that we are to receive them and treat them as if they were native-born, as if they were citizens, and it also says that we are never to oppress them, and so that’s our job as religious leaders, to hold up our faith values. 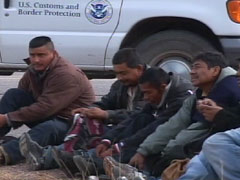 SEVERSON: So you think that obeying the law would take precedence over taking care of the least amongst you?

REV. TIM SMITH: Well, obeying the law is foundational to our society and one of the reasons why the United States has been a haven for people across the years, that there has been a rule of law here and that through that rule of law we can sort out these problems that we have.

SEVERSON: Mark Tooley says scriptures that are often sited don’t really apply to illegal immigration and that religious opponents are not representing the views of their congregants.

TOOLEY: There is a perception that the religious world is for liberalized immigration because those on the more liberal side of the religious world are the most outspoken. So I don’t think that most of these church officials genuinely speak for the constituencies they claim to speak for.

BISHOP KIRK SMITH: I find that totally, totally wrong. I mean, these are our parishioners. I have a parishioner who’s undocumented, whose son who is seven years old said to her this week, “Mommy, what am I going to do when they take you away?” Those are my parishioners. I can’t see how somebody can say you’re out of touch with those people. Those are the people that I serve, and those are the people that I care about.

SEVERSON: Bishop Carcano says many in her congregation oppose the law, but some are very upset with her position.

(speaking to Bishop Carcano): Have you had people leave or threaten to leave the church over this issue?

BISHOP CARCANO: We have, we have. They’ve left. Some of them are people who leave for a season and then return. Others—we will have lost them, and we pray for them.

BISHOP CARCANO: We know that there are moments in history when we are under laws that are not just, that are not moral, that are not right. We’re called to challenge those. Slavery—it used to be a law to have slaves and to treat them in a certain way. If religious leaders had sat back and said that’s alright, we would have been stuck. We would have been at a very different place over the years and today. There are moments when we must challenge the laws of society.

SEVERSON: The state has taken a huge hit economically since the bill passed. Phoenix officials estimate the city has lost at least $100 million just in convention cancellations, and more keep coming in. Bishop Smith thinks the law will eventually be defeated, but not because of moral or ethical concerns.

SEVERSON: Unless court challenges prevent it, the Arizona law is scheduled to take effect after July 28.