BETTY ROLLIN (correspondent): It’s called CyberAbuse and it looks like this: “She is a whore and she’s not even good looking.” “Biggest freshman slut.” This is the sort of message that Erin Roy and her sorority sisters found themselves confronted with in Erin’s junior year of college. Erin is now a senior at Marist College in Poughkeepsie, New York, a small college with a Catholic heritage.

ERIN ROY: One day I came home from class, walked in my house, and my housemates were huddled around the computer, and they said that they had heard of and found this Web site. So I went over, checked it out and just saw terrible, terrible things written. Initially it definitely affected a lot of girls I know. I think they were just devastated, embarrassed, upset. Marist is a very small school, so one person hears something, and it spreads like wildfire even if it holds no truth.

ROLLIN: The Web site that was spreading the malicious gossip at Marist and 500 other colleges and universities was called JuicyCampus. Incredibly, the students had no way to stop it since the messages were all anonymously written, and the Web site was under no legal obligation to remove it. 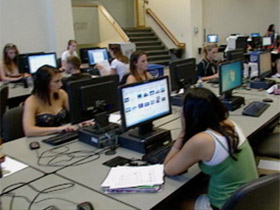 ROY: Some of them definitely, probably were written by men who maybe left off on the wrong foot with a girl. Maybe something happened, and you know he didn’t think of her in the highest regards, and for girls—jealousy. They know this site is anonymous, so they are just so willing to jump on their computer and write comments about people, because they know they will never be caught.

ROLLIN: Erik Zeyher, who graduated from Marist last year, was class president. A fellow student’s email alerted him to the problem.

ERIK ZEYHER (reading an email): “Two of my roommates have suffered eating disorders and have been getting help from the school. Because of this site they have been up for panic attacks most of the night.”

ROLLIN: The site became like a campus virus affecting everyone. There was a particular fear that potential employers would see the comments. Given that there was no legal way to stop postings, the question was how do you stop them? Student leaders and administrators first considered banning the site, then decided to launch a campaign.

ZEYHER: We actually found a program that Princeton was using, they came up with, called “Own What You Think,” which is a way for students to basically voice their opinions in a constructive, respectful—and in a way that isn’t anonymous, so you could find out exactly who was saying what about each other. 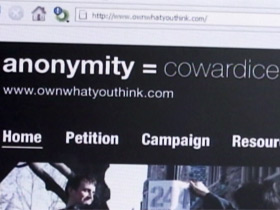 ROLLIN: And what were the opinions?

ZEYHER: “Hey Julie, you are the best roommate ever” to “Brandon, thanks for helping me out with my homework. You are a great person and a really great friend.”

ROLLIN: In addition, they flooded JuicyCampus with messages of love.

ROLLIN: So all of this together seems to have worked.

ZEYHER: It actually did. Students really bought into the idea of social change and that we won’t stand for this, and as a community we really made a difference.

ROLLIN: Although JuicyCampus ran out of money and eventually shut down, other sites are alive and well, and the targets are not only on campuses. Michael Fertik, who lives in northern California, is in the business of trying to protect adults and companies from online attacks.

ROLLIN: This is Manhattan High School for Girls on East 70th Street in New York City, where they consider the act of gossip to be a sin, a huge sin. The Orthodox Jewish girls who attend this school are made aware every day of the danger of gossip, which they call lashon hara. Lashon hara is speaking ill of someone—or even listening to such speech. Even though constructive criticism in conversation can be allowed, harsh criticism is forbidden.

RABBI MORDECHAI PRAGER (Teacher of Jewish law): Human beings which are created in the image of God deserve to be protected. Their dignity should be protected, that even if they do something wrong they should not suffer embarrassment. They should not be degraded by other people. 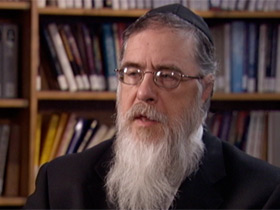 ROLLIN: This morning the subject of lashon hara is part of Rabbi Prager’s lecture. But what if someone seems to deserve criticism?

ROLLIN: And what about gossip that is intimate but not critical?

RABBI PRAGER: There is a prohibition of spilling the beans. If something was told to you in privacy, the person does not want it to get out, you have no right to tell it to anyone.

ROLLIN: The students regularly do skits about the evils of lashon hara. But avoiding nasty comments isn’t always easy.

MIRI LIDSKY: I think I’ve been in a few situations where I had a really juicy story to tell to people, and it really wasn’t so nice about somebody else, and I stopped and just thought about these laws. Learning the laws every night, it really helped me just bring about an awareness that I stopped to think about before I said the story, that maybe I really shouldn’t say this.

MICHAL LOSHINSKY: Every single day you are talking with your friends and there’s always new conversations and new pieces of gossip to talk about. Like it does get easier, because you first have to learn the laws. You have to want to do it, and you have to push yourself and control yourself. 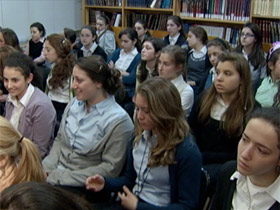 ITA DAICHES: It turns me into a more positive person, because if I am not saying bad things about other people it affects the way I think.

ROLLIN: There are times when Jewish law allows, even condones lashon hara—when giving factual information in a court of law, for example, or to protect a person from imminent harm. And outside Jewish law, defenders of gossip say that often it’s just a way that friends bond.

ROLLIN: The girls at Manhattan High School are largely unaffected by the biggest conveyor of gossip, namely the Internet. For the most part, this Orthodox community prohibits use of the Internet. But many people, especially young people, virtually live on the Internet, where it’s open season and there is no law to protect them.

ROLLIN: In spite of the victory at Marist College, many other colleges are dealing with the problem of online gossip sites and which, given their growth, will continue to be a problem for some and a temptation for others.