BOB ABERNETHY, anchor: The US Supreme Court ruled this past week that juvenile offenders—those under 18 when their crime was committed—may no longer be sentenced to life in prison without parole except when the crime was murder. For more than a year, since before the case went to the High Court, Tim O’Brien has been reporting the story.

TIM O’BRIEN, correspondent: Kenneth Young, now 24, is serving a life sentence in Florida for a series of hotel robberies in the Tampa area in June of 2000. He had just turned 15 and was acting at the direction of an older accomplice—a crack dealer to whom his mother owed money.

KENNETH YOUNG (Inmate, Florida Dept. of Corrections): He threatened to hurt my Momma. 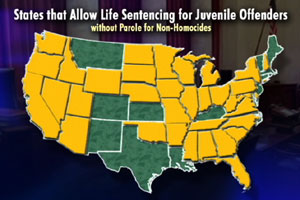 O’BRIEN: If you didn’t go along.

O’BRIEN: Although Young never held the gun, he was still sentenced to four consecutive life terms. Florida had abolished all parole five years earlier, which meant Young, notwithstanding his youth and the fact that he never physically hurt anyone, would spend the rest of his life in prison.

This week, the US Supreme Court found that to be, in principle, unconstitutional—a violation of the Eighth Amendment ban against cruel and unusual punishment. The categorical rejection is welcome news for about 130 youthful offenders who, like Kenneth Young, had been serving life without parole for crimes in which no one died. It is also a stunning victory for Young’s attorney, Paolo Annino, who runs the Children in Prison Project at Florida State University. Annino had been crusading in state legislatures for years to allow parole for all juvenile offenders, no matter how serious their crimes.

PROFESSOR PAOLO ANNINO (Florida State University College of Law): Oh absolutely. I think we’re immoral ultimately as a nation. This is no different from slavery or other major moral issues. Placing children in adult prisons for life is a death sentence for children. Do we want to do that as a society?

O’BRIEN: In its decision, the Court relied heavily on research by Annino showing that while 37 states allow sentencing juveniles to life in prison without parole for non-homicides, such sentences in reality are quite rare. Justice Anthony Kennedy, for a five-judge majority, went even further, writing the practice “has been rejected the world over…the United States is the only nation that imposes [it.]” The Court also heard from a coalition of twenty religious groups who wrote that life without parole for juvenile offenders is contrary to the central values of their faiths—“mercy, compassion and forgiveness.” The Court’s decision does not guarantee that Kenneth Young—or any other juvenile offenders—will ever be released. But it does guarantee they now are at least entitled to a chance.

For Religion and Ethics Newsweekly, I’m Tim O’Brien in Washington.