KIM LAWTON, correspondent: In Southern Virginia’s Fifth District, Democratic Congressman Tom Perriello is in a tight race for reelection. On this day the Roman Catholic candidate is in Lynchburg, helping deliver food with Meals on Wheels. It’s part of his Volunteer Tithing Initiative, in which Perriello and his campaign staff give 10 percent of their time to local charities.

REP TOM PERRIELLO, (D-VA): Tithing in my faith tradition is about giving 10 percent of what you have, and the most precious commodity we have on the campaign is our time. And it reminds us why we are doing this in the first place, and we always leave a little more inspired and fired up than when we went in, and I think that’s an important part of keeping the focus on serving the people and not the political games.

LAWTON: Perriello has been speaking a lot about his faith on the campaign trail, visiting churches and building relationships with local clergy. It’s a religious outreach strategy that helped him narrowly win two years ago. 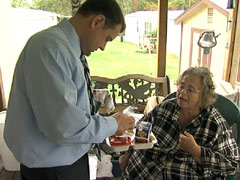 PERRIELLO: It’s not just a matter of going to church or being able to quote some Bible verses. It’s really an authenticity that I think people look for, of saying is this guy motivated by something other than power.

LAWTON: But leading up to these midterm elections, only a few other Democratic candidates have embraced that type of broad-based faith outreach, and that’s a big shift from just two years ago. David Gibson is religion writer at PoliticsDaily.com.

DAVID GIBSON (Religion Writer, PoliticsDaily.com): The Democrats’ faith outreach in 2010 hasn’t been anything like it was in 2008, and that’s doubly bad news because the incumbent, the president in this case, and his party are always going to lose seats in the midterm elections. So they really needed to ramp up their faith outreach, especially in such a difficult time, and they haven’t done that.

LAWTON: For years, Democrats faced what many called a “God gap.” Large numbers of Americans said they thought the Republican Party was much more friendly toward religion than the Democratic Party. Then, in 2008, the Obama presidential campaign and Democratic Party structures launched an unprecedented campaign targeting religious groups. It appeared the God gap might be starting to close. But now observers say it’s widening again, and that is hurting the Democrats in this election. According to a survey by the Public Religion Research Institute, voters across all religious groups are less supportive of Democratic candidates than they did in 2008, and those declines are especially significant among white Catholics and mainline Protestants. Gibson says there has also been a loss of support within the Jewish community. 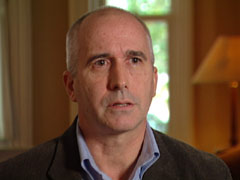 GIBSON: Seventy-eight percent, almost 80 percent of Jewish voters backed Obama in the 2008 election, but his approval rating is down to about 50 percent among those same voters. That’s a reliably Democratic bloc that has really fallen off.

LAWTON: Insiders say the Democratic National Committee has been struggling over how to assimilate faith-based outreach into its overall campaign strategy. DNC leaders say they have been connecting with churches, especially black churches, and listening to the concerns of clergy. They’ve enlisted the support of some high-profile African-American pastors, including civil rights leader Rev. Joseph Lowery.

REV. JOSEPH LOWERY (in radio ad): “In 2008 we changed the guard. This year we must guard the change.”

LAWTON: Some progressive faith-based groups have been trying to rally voters, although they say they don’t have the resources they did two years ago. Catholics United is urging support for candidates the group believes are advancing justice and the common good. On this night the group organized Catholic University students to call Catholic swing voters in Ohio on behalf of Democratic Congressman John Boccieri. He’s been targeted by conservatives after voting in favor of health care reform. 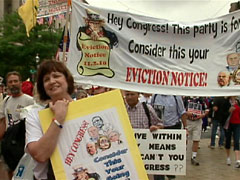 LAWTON: Some Democrats say there’s been less faith outreach this election because the focus has been on the economy and on responding to the anti-big-government rhetoric of the Tea Party movement. While the Tea Party has been rallying religious conservatives, many religious moderates and liberals say they are frustrated that the Democratic candidates by and large have not been framing economic issues in moral terms.

GIBSON: Democrats and folks on the religious left, let’s say, progressive believers, say look, we’ve got a great social justice message here. This is a faith-based message that should resonate with voters at a time of economic distress. And yet they feel that the administration and the Democratic Party have not really been preaching that message and in fact have been running away from it.

LAWTON: Hoping to influence the debate, the grassroots group Catholic Democrats released “A Catholic Pledge to America.” National director Steve Krueger says the pledge urges support for candidates who favor a social safety net to meet the needs of the nation’s most vulnerable—ideas, he says, that resonate with Catholic social teaching.

LAWTON: I asked Krueger to assess the Democrats’ religious outreach this year. 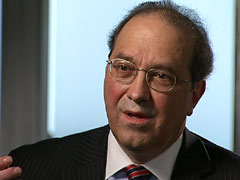 KRUEGER: A lot of the faith-based outreach efforts have really been in the work of this administration and of Democrats in Congress. I personally would like to see all elected officials talk more about their faith authentically. With respect to the Democratic Party, the way I view it is that it’s a work in progress.

LAWTON: I spoke with several Democratic religious activists who are deeply frustrated with how their party has been handling faith-based outreach this campaign season. They talked with me at length off the record but declined to be interviewed on camera before the election. Some in the religious community blame President Obama for the lack of Democratic outreach.

REV. RICHARD CIZIK (New Evangelical Partnership): Well, let’s face it. The president is not just the president; he’s head of the party. And if the party isn’t reflecting those concerns it’s because of the president’s fault, in my estimation. So put the blame where it belongs, right up at the top.

LAWTON: During the presidential campaign, Obama spoke frequently about his faith and how that faith connected with his policies. He put together a broad religious coalition that even included some from the evangelical community, which traditionally has voted overwhelmingly Republican. At the beginning of his administration, the president appointed an advisory council of two dozen diverse religious leaders. But that council’s term expired more than six months ago, and a new one has yet to be named. The White House says the recommendations of the council are being studied and implemented, but critics charge that it’s been window dressing merely for political support. Many in the faith community are also disappointed that the president hasn’t been speaking more in religious terms or highlighting the moral dimensions of his policies and meeting with faith leaders as frequently as he did on the campaign trail. And when he has done those things, some say it may have been too little too late. 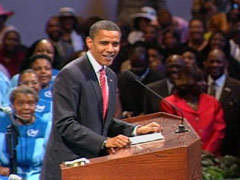 GIBSON: I think the Obama administration and the Democrats really took for granted those faith groups that came out for them in 2008 and haven’t cultivated them in the same way that certainly their opponents have.

LAWTON: Some Democratic leaders say they do recognize the importance of reaching out to faith-based voters. Former Maryland lieutenant governor Kathleen Kennedy Townsend wrote a book about what she sees as the appropriate ways to mix politics and religion.

KATHLEEN KENNEDY TOWNSEND (Author, Failing America’s Faithful): I think galvanizing, in particular, religious voters is very important now. You speak in a language that they understand, and you underscore those issues that they particularly—or we, I call myself one—care about.

LAWTON: But if many Democrats are still figuring out exactly how to do that, Gibson sees a potentially complicated religious scenario for the 2012 elections.

GIBSON: I think the religious right is going to be energized, reenergized, even resuscitated by the election in November if the Republicans come in with the force that’s expected, and I think that’s going to be a wake-up call for the Democratic Party, for the Obama administration, and for believers on the liberal side of the spectrum, the so-called religious left. 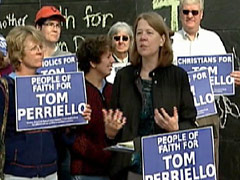 LAWTON: And in the meantime, many party faithful say they fear Democrats have squandered an opportunity to energize some key voters in a year when they need every vote they can get.

BOB ABERNETHY, host: Kim, did Democratic officials agree that they’ve done very little in the way of outreach this year?

LAWTON: Well, they are not saying very much about what they think about their outreach. We approached several elected officials and Democratic Party leaders to get them to talk about this, and they did not want to go on camera talking about it, with the exception of Representative Perriello, who was in my story, who only wanted to talk about what he was doing and not what the party as a whole is doing.

ABERNETHY: Why do you think they haven’t done more?

LAWTON: Well, that’s the question everybody’s asking, and I am not sure that anybody has any good answers right now. I am hearing that there’s going to be a big post-mortem after the election to look at this. The DNC [Democratic National Committee] is doing outreach among black churches and has been trying to rally African-American voters, including within the black churches. That’s a very reliable Democratic base, and so they figure if they can get those people out to the polls that will help. That’s been part of their traditional strategy, but they’ve been doing less with some of these other groups, which is why the grassroots groups are trying to step in, but it’s not coming from the party itself.

ABERNETHY: And, what about the president? 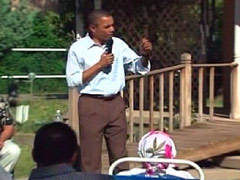 LAWTON: Well, some people have said to me that, indeed, part of the reason is that the people who had a more broad-based faith-based outreach are now at the White House or working in the administration and not on campaigns. But there has been some activity within the White House. I have heard a lot of concern that much of it has been very low-profile. For example, I know there’s going to be a meeting planned at the White House between the president and some ecumenical Christian leaders, mainline Protestant leaders, ostensibly to celebrate the 100th anniversary of the ecumenical Christian movement. It’s to happen the day before the elections. But they’re not letting any media in, and they’re not making a big deal about it.

ABERNETHY: And what about the Tea Party? What do they say openly about their relationship with religious conservatives?

LAWTON: Well, on the surface the Tea Party is a very secular movement. They don’t talk about religion very much, if at all. Sometimes they’ll have prayer services before a Tea Party rally that are optional, not part of the main event. But when you look underneath it, there is a lot of support from religious conservatives, and in fact some people say that that may be as much as half. One poll showed that half of Americans who consider themselves part of the Tea Party movement are religious conservatives.

ABERNETHY: I’ve been interested in the polling data that shows that maybe it’s not so much that people are anti-Democrat or anti-Republican. It’s they’re anti-anybody in power, and it’s not so much a partisan thing as the anger at people in Washington not getting more done, not being able to work together.

LAWTON: Well, that’s been a major theme through this election, of course, and the Democrats are on the firing line, because they are the ones in the places of power right now. I think that’s why some of the Democratic activists are saying in that kind of environment we need all the votes we can get and that’s why they’re a little disappointed that the party hasn’t seemed to be focusing on their communities to get out the vote as much.