DVD: “Marriage is reaffirmed each time a man and woman choose to make each other husband and wife…”

FRED DE SAM LAZARO, correspondent: Just weeks before upcoming statewide elections, Minnesota’s Catholic bishops, spearheaded by John Nienstedt of Minneapolis-St Paul, sent this DVD to every Catholic household in the state—400,000 in all at a cost of one million dollars, funded by an anonymous donation.

DVD: “At best, so-called ‘same-sex marriage’ is an untested social experiment, and at worst, it poses a dangerous risk with potentially far-reaching consequences.”

DE SAM LAZARO: Critics of Archbishop Nienstedt take issue with many of his assertions in the DVD, but they also question the timing of the DVD campaign, coming as it does just prior to the elections. 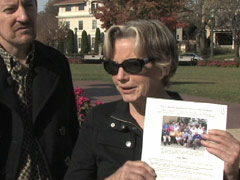 MARY LYNN MURPHY (Catholic Rainbow Parents): He is playing partisan politics from a tax-exempt pulpit. That is what he is doing. He skirts that issue because he doesn’t name a specific candidate, but he is in fact lobbying, right now. This is the time for the election. We all know that. He knows that. I think that’s very inappropriate, and he’s manipulating his flock in doing that.

DE SAM LAZARO: Of the three major party candidates for governor, only one—Republican Tom Emmer—supports an amendment to the state constitution that Nienstedt wants that would define marriage as between a man and a woman. While insisting that he isn’t endorsing Emmer, the archbishop made his preference clear.

DVD: “Marriage is the union of one man and one woman, and to protect this truth, it is time in Minnesota to let the people speak.”

DE SAM LAZARO: Would it have been more prudent or less controversial to have a longer conversation about this without the election looming to complicate matters?

REV. DAVID MCCAULEY (Minnesota Catholic Conference): I don’t know that we can answer that question.

DE SAM LAZARO: Father David McCauley of the Minnesota Catholic Conference, which represents the bishops, says as religious leaders they have a responsibility to speak out on timely moral issues of the day. 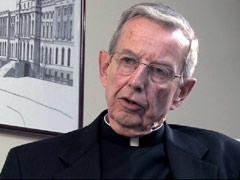 MCCAULEY: Thirty-one states have addressed the topic of gay marriage, and there can be no denial that it has become very much a topic of conversation in both national and state conversation, and I can see why they would want to make Catholic people aware of Catholic teaching at this time and culture.

DE SAM LAZARO: So far some 2500 people turned their DVDs in to a group that promised to bring them back to the bishop. Another 1000 were returned to sender directly and hundreds to a local artist creating a sculpture with them. Among the most vigorous opponents are Michael Bayly with a group representing Catholics from sexual minorities and Mary Lynn Murphy with a group called Catholics Rainbow Parents.

MICHAEL BAYLY: Now some would say that, oh, if they were speaking out on immigration reform or civil rights wouldn’t you think that that would be an appropriate thing for them to do, and of course I would. But the difference I see is that in all of those cases, the efforts to speak out, the end result is to broaden the circle, to expand the circle, and to include others in, whereas in this case, with the anti-gay marriage campaign, they’re seeking to exclude a huge part of the population, not just Catholics. 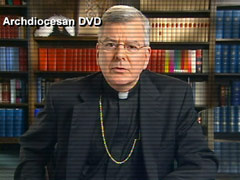 DVD: “The Church’s teaching on marriage is not a condemnation of homosexual persons as human beings. It is simply a reflection not only of the scriptures, but of the unique, procreative nature of the male-female bond.”

MCCAULEY: The teachings of the church regarding sexuality are the same for heterosexual people as they are for gay people. The church has always stated that the genital expression of sexuality is limited to those who are married, who have entered into that solemn covenant with one another to be faithful and to be supportive of one another and are open to share in God’s work of creation and that those things are not possible in a gay marriage.

DE SAM LAZARO: Nienstedt has long been outspoken on the issue of gay marriage, often battling in public with gay activists like Bayly. But Bayly says that debate has widened.

BAYLY: It’s no longer the usual suspects who are, you know, talking about this. It’s the rank-and-file Catholics, and they’re doing it, you know, by the hundreds and perhaps by the thousands within this archdiocese.

DE SAM LAZARO: One of those Catholics is Father Michael Tegeder, who ministers to a suburban Twin Cities parish. In a public letter he took issue with the archbishop’s contention that gay marriage is a threat to traditional marriage. He says the real threat to marriage is poverty. 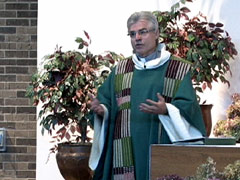 REV. MICHAEL TEGEDER: The political candidates don’t need that kind of issue out there when we’re faced with other real significant issues that they can do something about. The constitutional amendments are very unrealistic. It’s not going to happen.

DE SAM LAZARO: He says the response from parishioners and others has been overwhelmingly positive, even from some unlikely places.

DE SAM LAZARO: Tegeder has not been reprimanded by the archbishop, but Nienstedt turned down Tegeder’s request that he meet with concerned Catholics.

TEGEDER: We have a lot of people who are in same-sex relationships in our communities, our Catholic communities, and the DVD campaign was very hurtful to them and to their families and friends and to many other Catholics.

DE SAM LAZARO: In an editorial, the Minneapolis Star-Tribune said, “The church’s tax-exempt status could be threatened if it directly endorsed candidates. But instead it’s endorsing a policy outcome that’s entirely consistent with its theology in the same way Catholics have campaigned for decades to outlaw abortion.” But even though it’s generated controversy, most political analysts say the DVD campaign won’t have much impact on the election outcome. Most voters seem far more concerned about the economy.

For Religion & Ethics NewsWeekly, this is Fred de Sam Lazaro in St. Paul.